Homer Bailey shocked the baseball world when he put together an outstanding performance against the St. Louis Cardinals. Bailey pitched into the 7th inning, allowing just two runs, while striking out eight batters.

There was one major problem, and it was dÃƒÂ©jÃƒÂ  vu in the Queen City.

The Cardinals are the 1st team to have rookie starters not allow a hit over the 1st 6 innings in consecutive games since the 1964 Kansas City Athletics, via @EliasSports. pic.twitter.com/ob9uhLRlKT

Joey Votto ended the no-hitter with a single. Eugenio Suarez decided to play hero ball again, and deposited an 83 MPH pitch into the left field seats to tie the game at two.

The game would go into extra innings. The Reds missed a golden opportunity in the bottom of the 10th, highlighted by a controversial bunt attempt called on by Jim Riggleman (more on that below). The Cardinals made the Reds pay as Dexter Fowler hit a two-run home run off Amir Garrett in the top of the 11th inning. The Reds hitters made Bud Norris work in the bottom of the 11th, but he was able to get the Cardinals out alive. 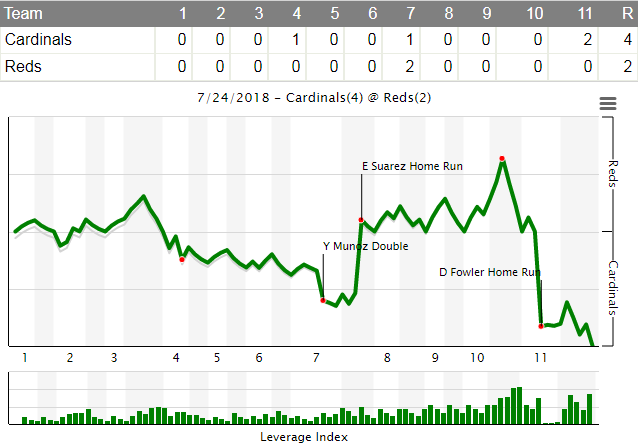 According to FangraphsÃ‚Â WPA statisticÃ‚Â (winning percentage added), the most important play of the game wasÃ‚Â Amir Garrett allowing a 2-run home run with 1 out in the top of the 11th inning, giving the Cardinals a 4-2 lead.Ã‚Â That play decreased the Reds chances of winning by 48.8% (from 50.0% to 8.6%). 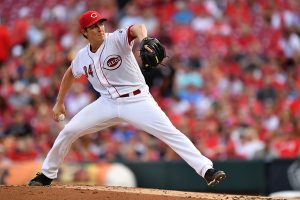 Homer Bailey was absolutely incredible in his return to the Reds rotation. It might not mean anything for Bailey going forward, but it was vintage Bailey tonight. His fastball velocity reached 96 MPH, and he was able to make good pitches which kept the ball in the park. The Cardinals only had 4 balls hit that had greater than a 50% hit probability off Bailey. 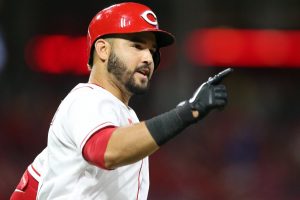 The word “Suarez” is now a curse word in the city of St. Louis, Missouri. How about Eugenio Suarez? He further cemented his NL MVP campaign with another massive two-run home run in the 7th inning.

Joey VottoÃ‚Â broke up Austin Gomber’s no-hitter with a single in the 7th inning.

Billy HamiltonÃ‚Â had a hit, and made a couple nice catches this evening. 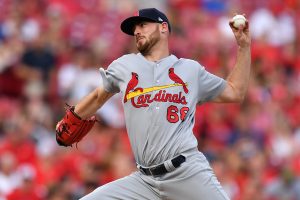 TheÃ‚Â Reds offenseÃ‚Â has had some pretty big moments over the last two nights, but overall they have really struggled so far in the second half. The Reds were no-hit by a Cardinals pitcher making their first MLB start for a combined 13.1 innings. The Reds have failed to score more than 2 runs in five straight games for the first time since 2014. Get well soon Scott Schebler?

Scooter GennettÃ‚Â has had some tough luck the last two nights. Yesterday, he missed a game-tying home run foul by a few feet in the 9th inning. Tonight, had a flyout with an exit velocity of 101.6 MPH and an 85% hit probability. Gennett has yet to record a hit in the second half (0 for 14).

Here I am for a second straight night having to defendÃ‚Â Jim RigglemanÃ‚Â (I feel dirty). Riggleman decided to have Curt Casali bunt in the bottom of the 10th inning in a tie game with runners on 1st & 2nd with 0 outs. The Cardinals third baseman,Ã‚Â Yairo Munoz, made an incredible play to throw out Adam Duvall on a solid bunt from Casali. The Reds would end up not scoring in the inning. I am all against sacrifice bunting 99% of the time. This is the 1% that it is OK.

Chances of scoring one run: