The start of the second half was delayed for three hours, but the Reds are probably wishing now they had delayed it 24 hours. Tyler Mahle has not been the same pitcher in July that he was in June, as he allowed six earned runs on late Friday night. The Reds offense was without Joey Votto and Scott Schebler, and they were only able to push across one run in a 12-1 loss to the Pirates. 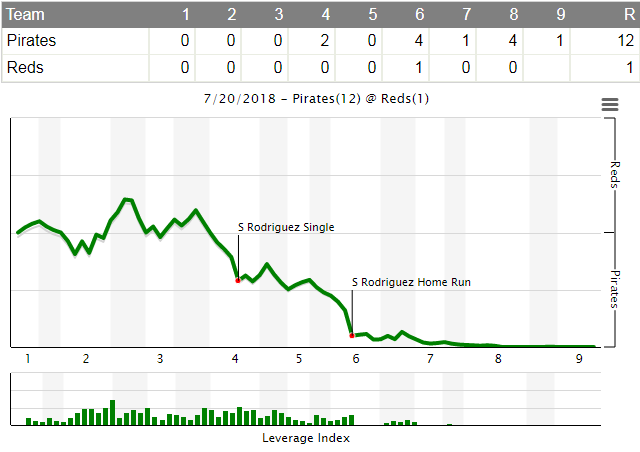 According to FangraphsÃ‚Â WPA statisticÃ‚Â (winning percentage added), the most important play of the game wasÃ‚Â Tyler Mahle allowing a 3-run home run to Sean Rodriguez with 0 outs in the 6th inning, giving the Pirates a 5-0 lead.Ã‚Â That play decreased the Reds chances of winning by 11.0% (from 16.0% to 4.9%).

Eugenio SuarezÃ‚Â had a 2-hit night. 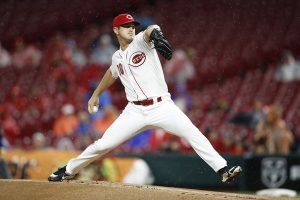 Tyler MahleÃ‚Â really struggled in his first start of the second half. Mahle was charged with 6 earned runs in 5.2 innings. He walked 3 batters, and 2 of those came around to score. The big blow for Mahle was when he left an 82 MPH pitch right over the plate that Sean Rodriguez smashed into the bleachers for a 3-run home run.Ã‚Â Mahle was really good in June, but he has now allowed back-to-back starts with 5+ ER.

Jackson StephensÃ‚Â got rocked again. He allowed a grand slam to Starling Marte that put this game away for good. He now has a 5.11 ERA/5.90 FIP. He has a 2.19 HR/9. It’s time for a fresh arm from Louisville.

Michael LorenzenÃ‚Â walked 2 batters in his inning of work.

Alex BlandinoÃ‚Â had to be helped off the field after being rolled into trying to turn a double play. It certainly did not look good for Blandino. It looked like the kind of injury that he could be out for quite some time. The Reds were out of players and had to put Curt Casali into 2B. He of course had the first ball hit to him and booted it.

I am not watching the Reds game. But if Blandino's injury is as bad as it sounds from the twitterverse, then he's going to miss time. And if so, the Reds need a backup shortstop. There's no one on the 40-man that can be that guy right now. Do they call up Blake Trahan from AAA?

Joey VottoÃ‚Â got the first game of the second half off. Riggleman said it was just to give Votto an extra day of rest after all of the traveling for the all-star game. Votto did have to enter the game with 2 outs in the 9th after the Blandino injury.

The Reds major surplus of middle infielders is not looking so deep right now with Senzel out for the year, and Blandino’s injury tonight. This is why you can never have too many good position players. It is always good to have 3 good middle infielders for 2 spots, and 4 good outfielders for 3 spots. During the course a 162 game season, you will need them all. That is why I am not in a rush to send Gennett or Duvall packing unless the return is just right.