The baseball regular season resumes on the banks of the Ohio River tonight, as two teams riding waves of resurgence go at it at Great American Ball Park.

The Pittsburgh Pirates have won seven of their last eight, including a five-game sweep of the Milwaukee Brewers last weekend. Prior to the break, the Reds won five of nine games in a very difficult road swing through Wrigley Field, Progressive Field and Busch Stadium. These two teams at the bottom of the N.L. Central standings are playing at a level that does not befit bottom feeders.

All of Redleg Nation hopes the Reds keep up the winning ways, but attention is also focused on possible deals as the July 31 interleague trading deadline approaches. As youÃ¢â‚¬â„¢ll see below, several Reds players are the apples of other general managersÃ¢â‚¬â„¢ eyes.

Still more attention is diverted toward the future, coming off Hunter Greene and Taylor TrammellÃ¢â‚¬â„¢s standout performances in the MLB Futures game last Sunday. In a question-and-answer post earlier in the week, our Doug Gray says he believes the RedsÃ¢â‚¬â„¢ farm system ranks somewhere in the range of fifth-best to 10th-best overall. Presuming that is the case, the RedsÃ¢â‚¬â„¢ front office and minor league staffs have done an amazing job in recent years to rebuild a system largely bereft of impact players.

This is a matchup of young pitchers with very similar statistical profiles who are projecting as mainstays of their respective teamsÃ¢â‚¬â„¢ starting rotations for years to come.

On April 8, when the Reds were in the midst of their historic season-opening tailspin, Taillon pitched a one-hit shutout against them. Mahle was the losing pitcher, giving up five runs in 4.2 innings Ã¢â‚¬â€œ his only start against the Bucs this year prior to tonight. 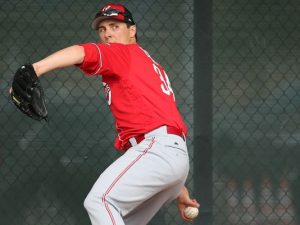 Several reporters covering the Reds reported this afternoon that Homer Bailey will return to the Reds’ rotation on Tuesday, with Sal Romano headed to the bullpen. The Reds have until before Tuesday’s game to make a roster move to accommodate Bailey’s return from Class AAA Louisville.

Speaking of starting pitching, the Reds reportedly have their eyes on Mets righty Zack Wheeler:

Interestingly, Wheeler was reportedly the RedsÃ¢â‚¬â„¢ first choice when negotiating the Jay Bruce trade a couple of years ago. Wheeler at the time was coming off Tommy John surgery, and the trade eventually culminated with Dilson Herrera coming over from the Mets. If the Reds do acquire Wheeler, youÃ¢â‚¬â„¢re likely to hear Dick Williams comment that they have liked him for quite awhile.

Wheeler has only one year of team contract control remaining after this year.

After a four-day break, the bullpen will be obviously well-rested and ready. We noted with interest this article on MLBTradeRumors.com:

It indicates that there is high interest from other teams in Reds relievers Raisel Iglesias, Amir Garrett, Jared Hughes and David Hernandez. With that being the case, and with other available relief candidates like Brad Hand coming off the market, it would be a bit surprising for the trade deadline to arrive without Dick Williams receiving an offer he likes for at least one of the four. (It would be highly unlikely for Garrett to be swapped, but never say never.)

Scott Schebler was placed on the 10-day disabled list earlier this week with a sprained AC joint in his shoulder, suffered when he hit the wall awkwardly in St. Louis attempting to field an extra-base hit. Phillip Ervin was called up today to take his place and is in the lineup tonight. Joey Votto gets a rare night off.

According to at least one statistical measure, Joey Votto has popped up only seven times since 2010 Ã¢â‚¬Â¦

Note in the Tweet response thread that Reds statistician Joel Luckhaupt questions the validity of the claim.