Yesterday, Chad gave us an encouraging update on the Reds young shortstop, Jose Peraza. Among all the positives the Reds offense has given us in the first half, Peraza certainly belongs among the discussion as his play of late has been pretty good. The improvement of his numbers so far, as well as his young age, give reason to be optimistic.

Peraza does not walk much nor does not hit many home runs, so he is relying on base hits for most of his production. Therefore, PerazaÃ¢â‚¬â„¢s numbers can be very much dictated by his BABIP. The chart below shows exactly that for about two seasons worth of data, with a little deviation towards the end. 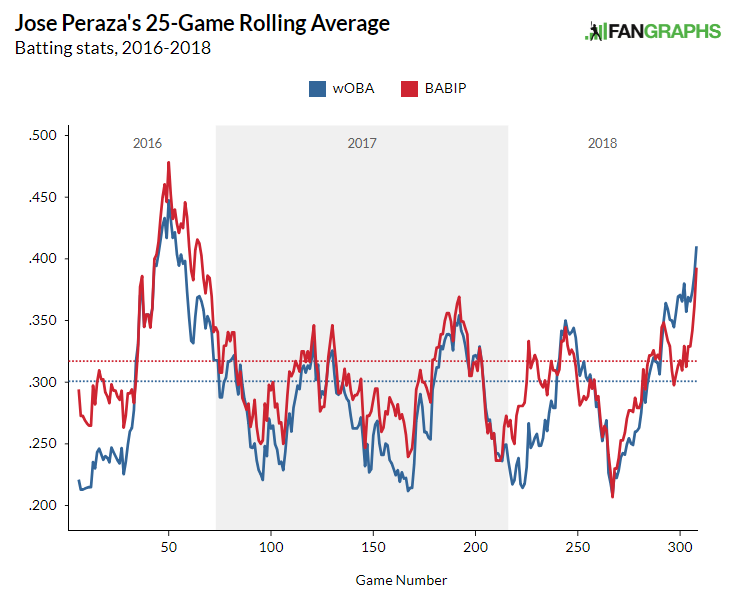 Since PerazaÃ¢â‚¬â„¢s time with the Reds began in 2016, his wOBA has never outpaced his BABIP. That is, until the last 14 or so games, where he sustained production that was not directly because of a high BABIP. Maybe this is just a blip, as his BABIP skyrocketed after hisÃ‚Â  record 11-hit series against the Cardinals. Or maybe it is an indication that he is improving as a hitter.

While Peraza will never be confused for Joey Votto when it comes to plate discipline, he has once again descended into the Votto-like depths of low O-Swing%, at least for the time being. 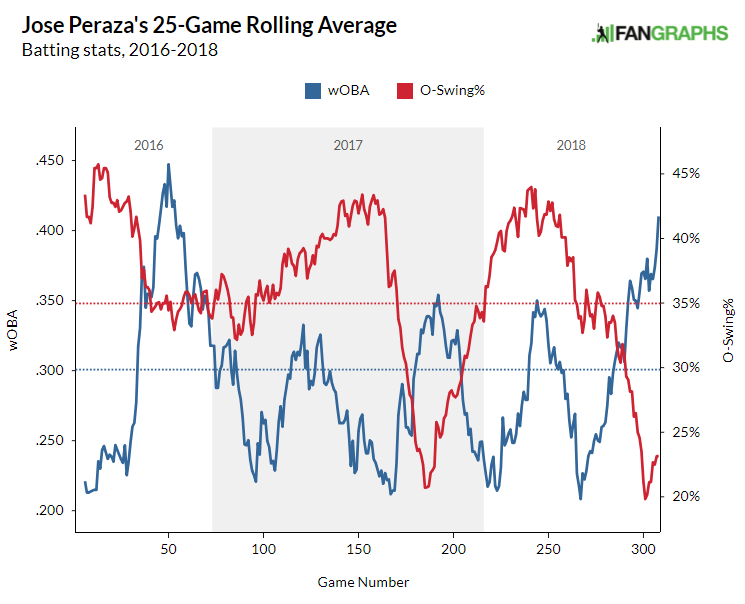 PerazaÃ¢â‚¬â„¢s batted ball profile shows even more ups and downs, with a sustained drop in soft contact after a spike to start to the year. 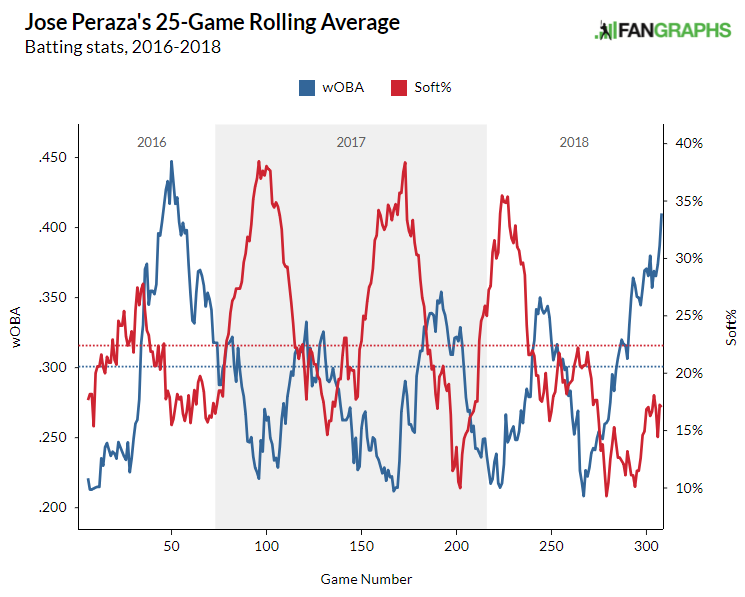 Again, there is big improvement here, dropping from 26.6% in 2017 to 19.0% so far in 2018. The question that Jose needs to answer is if he can develop more consistency and keep his both his Soft% and O-Swing% down closer to league average for the second half of the season.

Even if he is unable to do so, there are other signs that Peraza’s strong hit tool will continue to drive his offense. Below are his wOBA, xwOBA and exit velocities for each hitting zone in 2017 and 2018, courtesy of Baseball Savant. 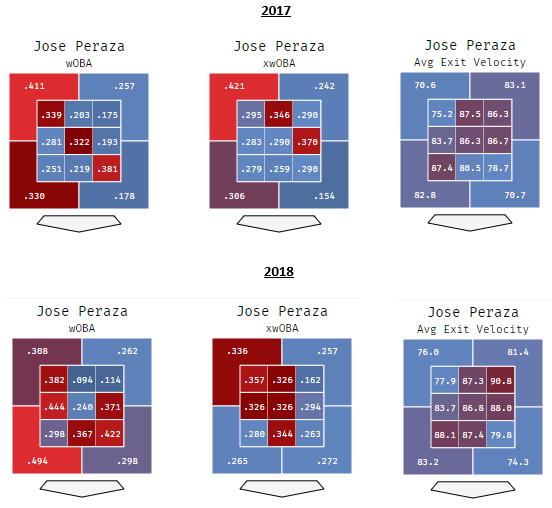 The current state is not perfect but it is another improvement, with fewer “soft zones” across the board. And even though his exit velocity is low overall, there are only three zones that are below league average, which gives pitchers fewer ways to attack him.

Peraza obviously still has his shortcomings. His hard contact rate this year of 29.2%, while up from his career 23.8%, is still well below league average of 35.4%. Exit Velocity and Barrel Percentage metrics from Baseball Savant tell similar stories. With an xSLG (.368) a bit below his actual SLG (.391), his 5 home runs are probably not going to become 10 by season’s end (he hit 5 all of last year). Bottom line, he is not turning into Francisco Lindor anytime soon.

For now, that is alright. The Reds offense has found another level recently and with Nick Senzel still to come, should have plenty of firepower to support PerazaÃ¢â‚¬â„¢s bat, if that is what the organization decides to do. As of right now he is exactly average for an MLB shortstop and above average for an NL shortstop (as Chad pointed out in yesterdayÃ¢â‚¬â„¢s post), according to wRC+. He provides value on the base paths (25th in MLB in BsR) and continues to look more comfortable on defense. And yes, he is only 24 years old.