After a slow start that lingered through the month of May, the 2018 Reds offense has shifted into high gear. It has produced the third most runs in the National League. In June and July, our Reds have outscored the Red Sox, Yankees, Dodgers, Cubs, Brewers, even Cleveland. In fact, they’ve put more runs on the board than any team that doesn’t play home games at altitude.

Last year, the Reds finished eighth in the NL in runs scored. Using a rate statistic (wRC+), the Reds have improved from 4% below league average to 2% above, a significant gain relative to 29 other major league teams.Ã‚Â

What accounts for the impressive gain in offensive production?

Not power. Power isÃ‚Â so 2017. The Reds were sixth in home runs last year and are eighth in 2018. Likewise, in overall power (ISO), the Reds have fallen from seventh best in the NL to twelfth.

ThatÃ¢â‚¬â„¢s right, this Reds team — the one that ranks third in runs scored — is near the bottom of the league in power. Process that.Ã‚Â

How about stolen bases?

If power and speed aren’t to credit for the Reds offensive surge, how about their hit tool?

First, the Reds have hit more line drives (25.4%) compared to last year (20.8%). Those liners have come almost entirely at the expense of fly balls. Data shows the Reds have hit the ball harder (exit velocity) but not farther. The team’s average batted ball distance, line drive distance, fly ball distance are all the same from last year to this year. Just fewer fly balls and more line drives.Ã‚Â

As a result, the Reds batting average on balls in play (BABIP) Ã¢â‚¬â€œ the percentage of hits per balls put in play Ã¢â‚¬â€œ has risen from .294 (tenth) to .312 (second). ThatÃ¢â‚¬â„¢s a huge gain relative to the league. Much of that is due to hitting line drives instead of fly balls.

The Reds BABIP on fly balls is unchanged from 2017 to 2018. That makes sense since the Reds fly ball exit velocity and distance hasnÃ¢â‚¬â„¢t changed. On line drives, the Reds BABIP was actually higher in 2017.

The Reds have gained in batting average on ground balls. In 2017, they hit .225 on grounders compared to .246 this year. TheyÃ¢â‚¬â„¢ve also hit their ground balls harder (84 mph compared to 82 mph). That’s significant because ground balls are more than 40% of balls in play.Ã‚Â

Bottom line for batting average, the Reds are hitting more line drives instead of fly balls and have hit their ground balls harder this year.

That brings us to walks.

First, letÃ¢â‚¬â„¢s clarify the value of walks. Are walks as good as a hit? Sometimes yes, but not other times. If a batter is leading off an inning, a walk is as good as a single. But a single is better than a walk at moving a runner from first to third or scoring a runner from second. Singles have greater overall run production value than walks, but walks are nowhere near worth zero in contributing to runs. In fact, walks are much closer to singles than zero in run contribution.Ã‚Â

Fortunately, we donÃ¢â‚¬â„¢t have to speculate. People keep track of how much walks (and every other batting outcome) contribute to runs. This isnÃ¢â‚¬â„¢t theoretical, these numbers (linear weights) are based on every actual MLB play over a season. The linear weight of a walk in scoring runs in 2018 is .689, for a single, itÃ¢â‚¬â„¢s .880, for a double 1.250 etc.

So walks arenÃ¢â‚¬â„¢t as good as hits in terms of producing runs. TheyÃ¢â‚¬â„¢re about 80% as good. But evaluating hitters based on at batting average would miss the value of walks. Just as using on-base percentage doesn’t measure power.Ã‚Â

LetÃ¢â‚¬â„¢s get back to the 2018 Reds. TheyÃ¢â‚¬â„¢re walking a lot. In almost ten percent (9.9%) of their plate appearances, the Reds are earning a free pass. ThatÃ¢â‚¬â„¢s tied for second best in the majors, behind only the NL East first-place Philadelphia Phillies.

Before we break down the current Reds team and its walk-rate, letÃ¢â‚¬â„¢s take a short trip down repressed memory lane back to 2004. HereÃ¢â‚¬â„¢s a chart showing the Reds team walk-rate (red line) vs. the league average (blue line), with a curveball, the Reds line does not include Joey Votto. 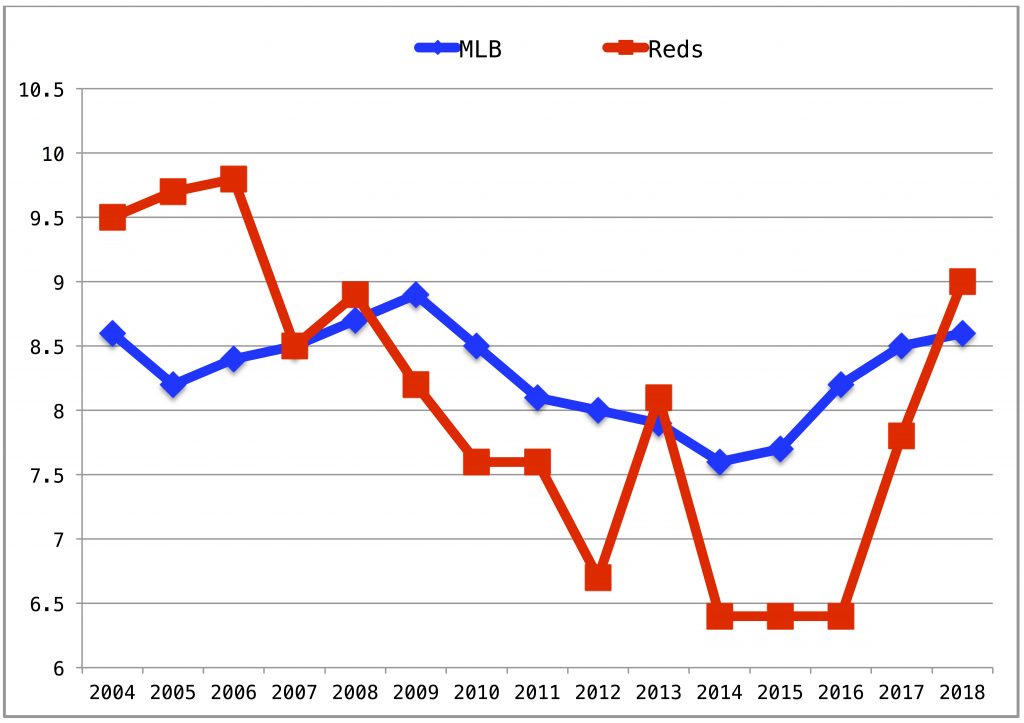 2004-2006 should be called the Adam Dunn Era. The Reds walk-rate was substantially above league average and Adam Dunn is the main reason. Ryan Freel, Austin Kearns, Ken Griffey Jr., and Scott Hatteberg also played a role, but the Dunner and his career walk-rate of 15.8% was the primary driver. (Note: Dunn’s career number, which includes his decline years, is only a half-point lower than Joey Votto’s.)

2007 begins what IÃ¢â‚¬â„¢d call the Brandon Phillips-Walt Jocketty-Dusty Baker-Billy Hamilton Era. Phillips started with the Reds in 2006. Walt Jocketty became general manager in 2008, shortly after Dusty Baker had been hired to manage.

ItÃ¢â‚¬â„¢s plain that Walt Jocketty didnÃ¢â‚¬â„¢t prioritize a playerÃ¢â‚¬â„¢s ability to walk. After the value of on-base percentage became recognized in nearly every front office, players with good walk-rates became more expensive. JockettyÃ¢â‚¬â„¢s track record shows that whenever push came to the slightest shove, he wouldnÃ¢â‚¬â„¢t acquire the guys who walked. Meanwhile, as part of their rebuilding process, the Chicago Cubs didÃ‚Â prioritize walksÃ‚Â (and you thought that W flag stood for wins).Ã‚Â

So in the Phillips-Baker-Jocketty-Hamilton Era, the Reds (sans Votto) team walk-rate plunged far below league average. That trend deepened even after Dusty Baker left, due in large part to the Reds giving Billy Hamilton so many at bats.Ã‚Â

That 2013 spike has a simple explanation: Shin-Soo Choo (15.7% BB) in a contract year. To think that Jocketty was terrifyingly close to a 3-year commitment to Ben Revere (4.5% career BB-rate) instead of signing Choo. Fortunately, the Twins backed out on the Revere deal.

The welcome upturn in walks in 2017 corresponded with Brandon Phillips leaving (not that he was the entire culprit) and moving Jocketty out of the main leadership chair. It marks the onset ofÃ‚Â Follow Joey Votto Era. In 2017, Eugenio Suarez and Zack Cozart adjusted their approaches (obligatory Votto influence post) and saw walk-rates jump from 8 to 13% and 7 to 12% respectively. As mentioned, the 2017 Reds subtracted Brandon Phillips (3.1% walk rate in 2016).

Not all the walk-rate factors were great in 2017. Jose Peraza (3.9%), Adam Duvall (6.0%) and Scooter Gennett (6.0%) had major roles with low walk-rates. Arismendy Alcantara walked twice in 108 plate appearances.

In fact, the 2018 Reds walk-rate is above league average without counting Joseph Daniel Votto. Amazing.Ã‚Â

Getting on base has fueled the Reds recent surge in run scoring. Taking walks is both a skill and an ethos, qualities the team management can reward or discourage. LetÃ¢â‚¬â„¢s hope the Reds front office keeps acquiring and promoting players who demonstrate those attributes.Ã‚Â

[Data was collected Saturday, from FanGraphs, Baseball Savant, The Baseball Cube and Baseball-Reference.]