In Little League, no one wanted to play second base. Second sackers were too small to play first, too weak to make the throw from second or third, and too slow to cover the outfield. Playing second base was insulting. It was the coach calling you a runt and good-for-nothing small person in front of your family, your friends, and the scouts you knew were watching you from afar.

Which, if you think about it, explains why every good second baseman ever plays like a reincarnated Napoleon Bonaparte or at least like the Tasmanian Devil in stirrups.

The Reds’ current logjam of having four promising second basemen and one Alex Blandino becomes both a luxury and a sociological conundrum. These four players (and Alex Blandino) are all very talented but all just so unprepared to play anywhere else on the diamond. They are small, weak, and slow! They are a collection of John Mulaneys!

(Alex Blandino, on the basis of his hair, is not a John Mulaney.)

To one end, this overabundance of second basement is just a reframing of the classic Abbott and Costello bit.

At some point in the future, the Reds’ front office will have to decide between Who, What and I don’t know to play second base. Why? Well, he’s in contention for the position too.

The question then is (and much has been written about it already): What should the Reds do to solve their second base backup? And if you’re thinking “well, I don’t give a darn” then I’m going to need you to explain your reasoning because he’s at shortstop currently and we don’t need to make this more complicated.

We’ll start with the current incumbent because his answer is the easiest: Scooter Gennett should be traded. I won’t make any caveats either. This isn’t a “trade him if the right offer presents itself” situation or a “trade him only if he really can’t play outfield” scenario. Scooter Gennett needs to be traded, full stop.

When trading assets, teams tend to trade from depth for need or best available. Scooter is extraneous depth at this point who will only become more expensive. Even if he does hit this well for the rest of his career, the Reds have not one, not two, but THREE potential replacements currently knocking on the door.

Trading Scooter is the best bet the Reds have at getting Major League quality pitching, or at least a top pitching prospect back. If 2019 is the first year of the playoff push, then Cleveinger or Shane Bieber or Justus Sheffield or Cionel Perez could all be good gets. But all of them require moving Scooter.

The other current 25-man resident stands the most to benefit by a Gennett exodus from the Queen City. With Scooter gone, Herrera becomes the everyday man for the rest of the season. That’s ideal because the Reds need to know what they have in Herrera going into the offseason in order to acquire even more starting pitching.

There are three potential outcomes for a Dilson Herrera starter experiment:

None of those are bad options! Even in scenario three, the Reds still have the Shed Long backup plan should Senzel deal with injuries forever and always. But the Reds need to figure out what’s going on with Dilson Herrera ASAP and trading Scooter is the only way to do so.

Ah, my pride and joy. As much as I want to say throw all the money at Senzel and make him the next Joe Morgan, that’s silly and short-sighted. What the Reds should do with Senzel actually depends on the results of the Dilson Herrera experiment.

If Herrera fulfills option 1 or 2, the Reds need to make a hard decision based on a two-variable calculus: How much faith do they have in Shed Long and how competitive do they believe they will be in 2019?

If the answers are “So much” and “Very,” then the Reds should deal Senzel this offseason for the best starting pitcher they can find. Assuming that through some black magic a Gennett trade does net Clevinger and that a Senzel trade gets someone like Chris Archer or Marcus Stroman, then the 2019 Reds’ rotation looks real good:

Think about that. The Reds’ Opening Day starter from 2018 becomes their No. 5 in 2019. I’d call that an upgrade. And if any of those guys get hurt, then you have a serviceable Sal Romano and a cranky Homer Bailey to slide in.

However, if Herrera goes the option 3 route, the Reds should keep Senzel and Long, instead looking to spend on a free agent pitcher (Jacob DeGrom?) instead of trading for one.

Poor Shedric, the odd man out in all of this. His best chance to make an impact for the Reds at second base requires Scooter to be traded, Dilson to tank, and Senzel to never overcome his injuries or be traded. I personally think the Reds should hold on to Shed at least until he’s proved that AAA is no match for his talents, but there’s no harm in shopping him either. Long has upped his prospect status so much in the past couple years that there must be some team willing to overpay this offseason.

Really, I just feel bad that there’s no clear path to the Reds because he seems like a likable and fan-friendly fellow.

I love Alex Blandino, let’s not overlook that. It’s just…Jose Peraza has played better. And is younger. And yeah, that’s about it. I think Blandino could carve out a nice career as a utility man, but I also wouldn’t mind sending him back to AAA and letting him get constant reps. He’s an enigma to me.

Whatever the case, there are ways out of this logjam that can tangibly help the Reds win in 2019. They just all involve trading Scooter. I’m sorry, but I don’t give a darn.

Prospect to Watch:Ã‚Â Not the most eye-opening choice here, but with Yasiel Puig on the DL, Alex Verdugo could have his opportunity to make an impact this season fantasy wise. He’s the Dodgers top prospect, who at the very least will make some noise next year after Puig inevitably leaves LA. He’s also 22 with an OPS of .907 at AAA, which like, he’s ready for the Show.

Author Views:Ã‚Â With the holiday and my admitted laziness, I haven’t written much in the past two weeks, allowing Jason Linden to sail by me in the standings. However, have no fear, I will avenge myself with sometimes questionable Reds’ baseball takes. 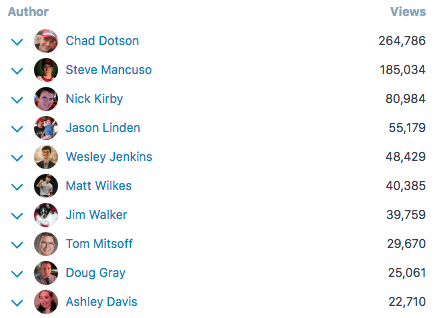