In todayÃ¢â‚¬â„¢s Contracts for the New Core post, weÃ¢â‚¬â„¢re going to shake things up a bit by talking about a player not currently in the RedÃ¢â‚¬â„¢s organization. After all, most teams who win the World Series do so after making some pretty big moves. While I donÃ¢â‚¬â„¢t think itÃ¢â‚¬â„¢d be impossible to build a championship team without signing or trading for any big names, the likelihood of it happening is slim.

So, when I took a look at the free agent market for the 2018-2019 offseason, I tried to match up the strengths of the market versus the weaknesses of the current Reds team. What the team is missing is a second (or third, depending on your opinion of Eugenio Suarez) bonafide offensive star to play alongside Joey Votto. Just take a look at the last few World Series champions, and the big names in their lineups: Altuve/Correa/Springer, Bryant/Rizzo/BÃƒÂ¡ez, Hosmer/Cain/PÃƒÂ©rez. I like Tucker Barnhart as much as the next Reds fan, but Votto/Suarez/Barnhart just doesnÃ¢â‚¬â„¢t really do it for me.

DonÃ¢â‚¬â„¢t get me wrong Ã¢â‚¬â€œÃ‚Â I think this current Reds team is more than capable of creating a playoff worthy offensive output. And if the plan is going to work, the team will definitely need more pitching. But looking at the lineup, where potential holes are, one thing is for certain:

Votto/Machado/Suarez is right in line with the trios listed above.

Could the Reds really go sign Manny Machado? The answer is simple: sure they can! ItÃ¢â‚¬â„¢s been a while since the last bonafide star has signed in Cincinnati. In fact, you probably have to go all the way back to Dave Parker in 1983 to get to someone who even approaches the skill level of a Manny Machado type free agent. Reasons for this (money) are just excuses. The Reds have said themselves that the point of running a small payroll over these last few seasons has been to build a Ã¢â‚¬Å“war chestÃ¢â‚¬Â. What better way to spend the war chest than to get a young face of the franchise shortstop with one of the best bats in the league?

Oh, there will be competition. Yes, thatÃ¢â‚¬â„¢s for certain. The buzz and interest around teams trying to secure Machado for just the rest of 2018 is arguably the most prominent news topic in the MLB right now. If that many clubs are interested in acquiring his services for a few months, think about the interest heÃ¢â‚¬â„¢ll garner on the free market. ItÃ¢â‚¬â„¢s gonna be insane.

The Reds will not only have to pony up the money to get Machado, but theyÃ¢â‚¬â„¢ll also need to convince him that Cincinnati is the best spot for a young baseball player to be in. Despite the national mediaÃ¢â‚¬â„¢s opinion of the Queen City, itÃ¢â‚¬â„¢s actually not a bad spot for a young start like Machado. Yes, of course, thereÃ¢â‚¬â„¢s the low pressure media. ItÃ¢â‚¬â„¢s been a haven for Joey Votto, who earlier in his career was about as awkward in front of a microphone as you could be.

But the park is a hitterÃ¢â‚¬â„¢s dream, the team itself is rich with history, and a long line of helpful ex-stars like Pete Rose, Barry Larkin, and Ken Griffey Jr. who could offer advice to the young man should he need it. Not to mention VottoÃ¢â‚¬â„¢s presence in the clubhouse, which youÃ¢â‚¬â„¢d have to think is a driving factor behind the lineups lofty positioning in the team OBP rankings this season.

LetÃ¢â‚¬â„¢s say all of that is enough to get Manny interested. Then, it comes back to the money. What is Manny Machado worth on the free market? What are some comparable contracts weÃ¢â‚¬â„¢ve seen in the past? LetÃ¢â‚¬â„¢s dive in

The 2017-2018 offseason was a strange one for free agents. Lacking a real generational talent, we saw teams play the long game, refusing to sign anyone early, instead waiting to see what interest was like for the top available players before striking a deal.

Depending on who you ask, Eric Hosmer was one of the better free agents available last offseason. He signed the largest contract, signing for 8 years and $144MM. ItÃ¢â‚¬â„¢s also the biggest signing in PadreÃ¢â‚¬â„¢s franchise history, and provides a glimmer of hope for Reds fans. The Padres are hardly the Yankees or Red Sox, and are on track for yet another losing season. But, the premier free agent talent saw something there, and decided to sign a long term contract. LetÃ¢â‚¬â„¢s break it down: 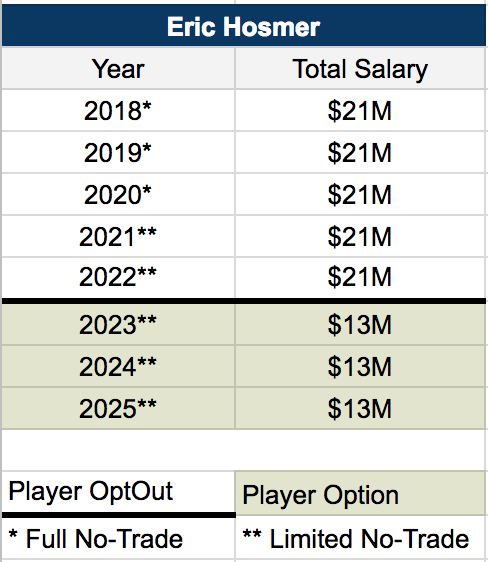 The contract itself is interesting: Hosmer gets an opt-out after five seasons, alongside three player options for $13MM each in years 6, 7 and 8. Those values are all lower than the $20MM/year through the first five seasons of the contract. So, if Hosmer rakes through those first five seasons, and thinks he can get another $20M multi-year extension elsewhere, or if heÃ¢â‚¬â„¢s unhappy in San Diego, heÃ¢â‚¬â„¢s free to leave. Also of note: the first three seasons include a full no-trade clause, with the remainder of the contract featuring a limited no-trade clause. Combined with the lesser salary on the back end of the deal, Hosmer should be a pretty tradeable asset down the line.

The signing took place after HosmerÃ¢â‚¬â„¢s best season as a pro, in which he hit .318/.385/.498 for the Kansas City Royals, putting up 4.1 WAR. That, of course, is chump change to MachadoÃ¢â‚¬â„¢s average of 5 WAR per full season. As far as monetary value goes, I think everyone would agree that this is the low-end for Manny Machado. However, itÃ¢â‚¬â„¢s good to keep in mind the fact that this was the biggest contract handed out in last yearÃ¢â‚¬â„¢s wacky offseason, just in case this next offseason is just as wacky.

If HosmerÃ¢â‚¬â„¢s contract is the floor for Machado, StantonÃ¢â‚¬â„¢s is the glass ceiling. Currently the largest contract in professional sports, Stanton signed a 13-year(!), $325MM(!!) extension with the Miami Marlins in 2015. ItÃ¢â‚¬â„¢s a whale of a deal, so letÃ¢â‚¬â„¢s take a look at the numbers: 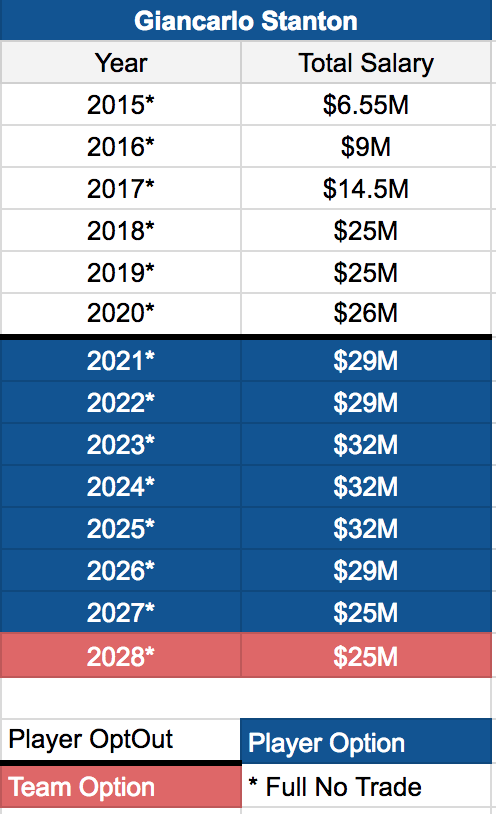 The deal includes a player opt-out after the 2020 season, preceding 7(!!!) player option years, and finally ending with a team option in 2028(!!!!). ItÃ¢â‚¬â„¢s also filled with incentives, ranging anywhere from a $50k Gold Glove, Silver Slugger, or All-Star bonus, to a $100k MVP bonus, which Stanton was able to cash in at the end of last season.

The funny part about this contract is that we should all expect Manny Machado to sign for even more than this. HeÃ¢â‚¬â„¢s the kind of player who becomes the best player on all but a few teams the day he signs a contract. Speaking of a teamÃ¢â‚¬â„¢s best player…

If the Reds are serious about signing Manny Machado, theyÃ¢â‚¬â„¢ll obviously need to take a good hard look at their finances. A Machado deal will almost certainly place him at the top of just about any teamÃ¢â‚¬â„¢s ledger, including the Reds. The man at the top right now, making an average of $25M a year, is Joseph Daniel Votto.

We all know the story. In April of 2012, Joey Votto signed the largest contract in Cincinnati Reds history, agreeing to a 10-year, $225MM extension. It essentially locked Joey Votto into being a Red for life, as the contract features a no-trade clause and only a lone club option in the 2024 season. ItÃ¢â‚¬â„¢s hard to believe that next season will be the halfway point of this contract. Votto has done nothing but earn every dollar heÃ¢â‚¬â„¢s been paid, which is incredible in its own right.

But, to get Machado, the Reds will need to be willing to outpay their star player. I donÃ¢â‚¬â„¢t think there will be any ego issues with Votto, but it will be the most significant investment for the Reds in the history of the ballclub. For that, you need to be sure Manny Machado will be worth every penny, much like Votto was and is.

So what should the Reds be willing to shell out for Machado? You all might want to sit down for this oneÃ¢â‚¬Â¦ 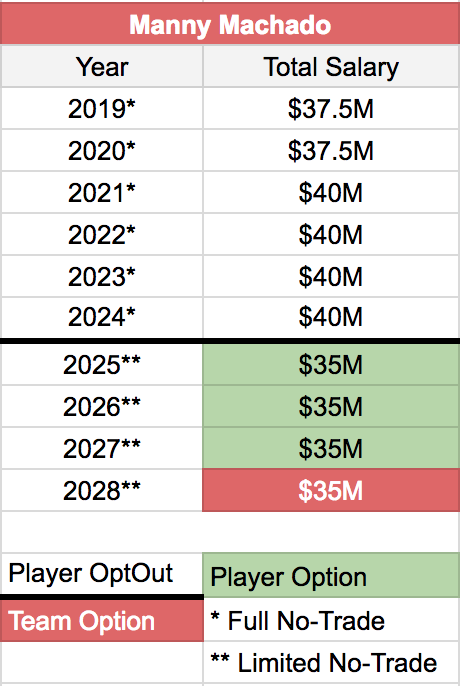 This is actually on the low-end for what some reporters are claiming Machado will sign for this offseason, but I just donÃ¢â‚¬â„¢t see it. We havenÃ¢â‚¬â„¢t touched at all on his disappointing 2017 season, in which he hit just .259/.310/.471 over 690 games. Manny definitely seems to be back on track in 2018, already having eclipsed the 2.5 WAR he put up in 2017. However, to shell out big time money to a guy who might someday turn back into that 2017 version of himself is a pretty big risk. If youÃ¢â‚¬â„¢re going to give someone the largest contract in sports, you need to be sure heÃ¢â‚¬â„¢s going to perform.

And thatÃ¢â‚¬â„¢s exactly what this contract is. $375M would be the new bar for professional sports, as far as total value of a contract goes. The Reds would have $65M tied up in two players through at least 2025, which is obviously uncharted territory for this club.

But letÃ¢â‚¬â„¢s not think about that. LetÃ¢â‚¬â„¢s think instead about a Votto/Senzel/Machado/Suarez infield. It doesnÃ¢â‚¬â„¢t hurt to dream, right?

What do you guys think? Is Machado worth the money? Would you rather see the Reds go after Bryce Harper? Sound off in the comments!