Wins have been hard to come by in Cleveland. The Reds had only won two of their previous 18 games at Progressive Field. Tonight the Reds hit, pitched and fielded well. They are now 2-2 on the tough road trip and have two more games in Cleveland then head to St. Louis for three before the All-Star break.Ã‚Â

Anthony DeSclafani made it through seven innings, throwing 98 pitches. The Reds relatively comfortable lead allowed Jim Riggleman to give DeSclafani a little extra rope late in his appearance. DeSclafani navigated the tough Cleveland lineup three full times, allowing five hits and two walks. The one run he gave up was a solo homer to former Red Yonder Alonso. DeSclafani struck out three batters. It was his seventh start of the season.

Amir Garrett took over and worked around a lead-off double in the eighth. But he gave up a walk and homer in the ninth.Ã‚Â Tanner Rainey came in for Garrett in the ninth. Rainey, throwing 100-mph fastballs, recorded an out but was victimized by two bloop hits (77 and 69 mph). Riggleman brought in Raisel Iglesias with the score 7-3 and two runners on base and facing the top of Cleveland’s order. Iglesias appeared to be surprised by being called in and and not ready. He gave up a sac fly and a double, but ended the game by striking out the dangerous Jose Ramirez on three pitches.Ã‚Â

Again, the Reds bullpen has been outstanding this year, way above average. Aside from Raisel Iglesias and maybe Michael Lorenzen, Reds relievers aren’t above average. So a bit of sliding back to reality is expected.Ã‚Â

The Reds got on the board in the second inning when Eugenio Suarez walked and Tucker Barnhart doubled. They extended the lead to 3-0 in the third, when Scooter Gennett led off with a walk, Jesse Winker tripled down the right field line and Tucker Barnhart followed with a single. Billy Hatcher had sent Gennett to a certain out at the plate on Winker’s hit, but luckily for the Reds, Cleveland’s catcher dropped the ball. Joey Votto added the fourth run with a 392-foot solo home run in the fifth. In the seventh, Billy Hamilton singled and scored on a Scott Schebler single.Ã‚Â

The Reds could have had a couple more runs early on if it weren’t for outstanding plays in the Cleveland outfield. Tyler Naquon robbed Gennett of extra bases in the first on a ball with a 102 mph exit velocity and hit probability of 62%. In the next inning, centerfielder Greg Allen made a great catch on a 397-blast by Adam Duvall.Ã‚Â

The Reds had a couple nice defensive gems of their own. Adam Duvall dove to knock a line drive down, preventing it from going for extra bases. In the third, Scooter Gennett fielded a ground ball that had deflected off of Votto’s glove. Gennett had to lunge back in the opposite direction, field the ball barehanded and just nipped the runner at first.Ã‚Â 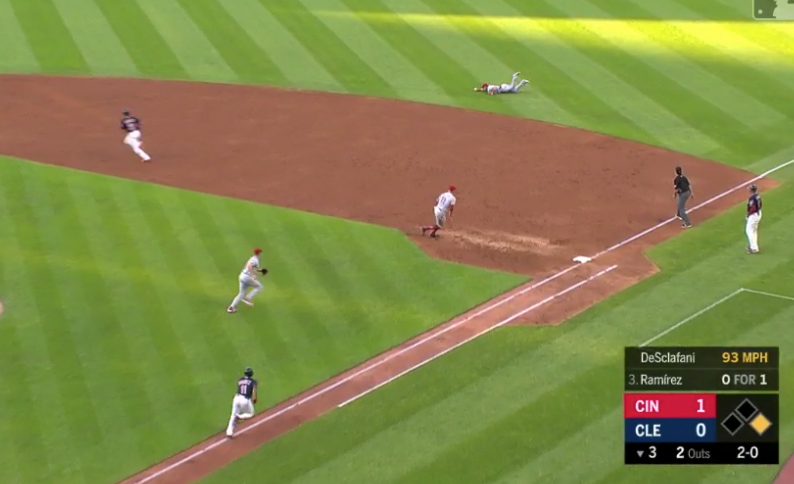 Scott Schebler had four hits leading off, including a 2-run Scheblast. He’s produced with hits, power and walks this year (wRC+ 126 – that’s 26 percent above league average). Yet a bunch of people, including a few Reds TV talking heads, are yammering about Billy Hamilton (wRC+ 73) getting back in the leadoff spot.Ã‚Â

Jesse Winker (wRC+ 120) had two hits and a walk. His on-base percentage is up to .392, third best on the team. Hamilton had two singles, as did Tucker Barnhart.Ã‚Â

Line-up Shenanigans Jose Peraza (wRC+ 87) has no business batting ahead of Votto (wRC+ 138), Gennett (wRC+ 135) and Eugenio Suarez (wRC+ 162). Sure, batting orders don’t matter a lot and the Reds offense has been humming as is. But they just lost two one-run games in Chicago where the offense scored 5 and 7 runs. They needed more and not having your best hitters getting the most at bats is needlessly giving away an edge. Peraza was 0-for-5 tonight, with three strikeouts.Ã‚Â

Herrera Sits Again The Reds called up Dilson Herrera before the Cubs series, but he didn’t get an at bat. He sat the bench again tonight. Manager Jim Riggleman acknowledged the need to get Herrera playing time, but said, “We’ve got to win games.” That shows the tension between organizational goals of putting the best 9 on the field every single day, developing players and seeing what you’ve got. Riggleman’s view is understandable. But meanwhile, Herrera gets rusty and he’s out of options so the Reds can’t send him back to Louisville for at bats.Ã‚Â

Sources: Dodgers have stepped up pursuit of a position player and are looking beyond Manny Machado. Have had conversations with Reds about Scooter Gennett, Twins about Brian Dozier and Mets about Asdrubal Cabrera. Dodgers’ versatility allows them to pursue a number of positions.

Reds Draft Pick Wins Recognition Josiah Gray, the Reds 2nd round draft pick, was named Pitcher of the Week in the Appalachian League. Gray pitches for the new affiliate, the Greeneville Reds. Gray pitched for the Reds tonight and gave up four hits and a walk over 5.2 innings, with 5 strikeouts. 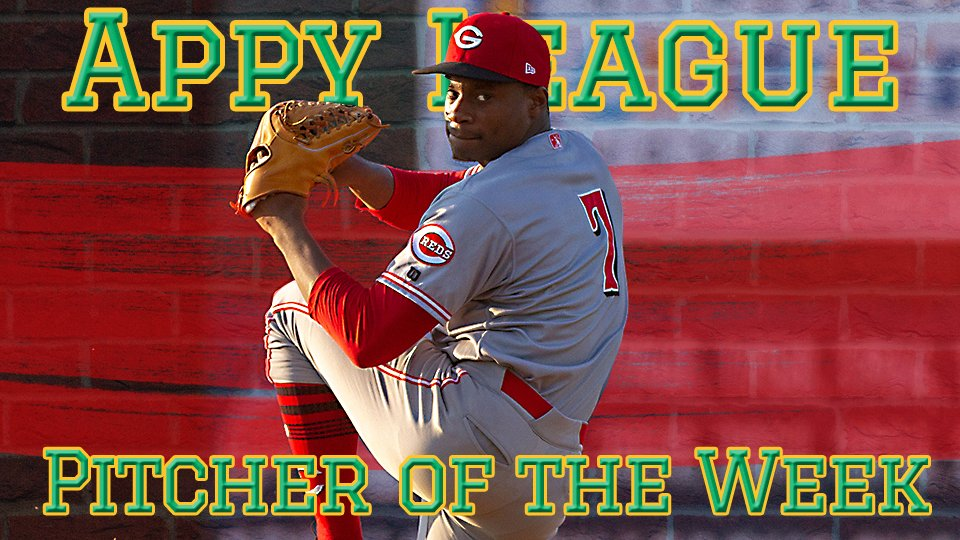