Heading into last Wednesday’s contest, the Reds team wRC+ stood at 99, good for 12th in all of baseball and 4th in the National League. That is above average on both accounts and feels like a good accomplishment considering where the team was after the first month of the season.

There are three players in particular who are largely responsible for the offense being as strong as it is and it should not be a surprise who those players are. As the cornerstone of the franchise, Joey Votto is showing that he still Joey Votto a mere eight seasons after winning NL MVP honors. Eugenio Suarez is following up a breakout 2017 with a tremendous year and is among the league leaders in RBIs despite missing 17 games due to injury. And last but not least, Reds Legend Scooter GennettTM has played remarkable baseball for the last calendar year and has provided a huge boost to this club as one of the more unexpected sluggers the team has ever seen.

The rigors of another losing season can make it hard to recognize when things are going well. These three players, given their importance to the team in past, present and future tenses, all have their individual moments and are certainly fun to watch. But what if we think about how often a team has three players of this caliber at the same time?

Using an arbitrary wRC+ of 143, (Scooter’s year-to-date number though last Tuesday), I looked for every team in major league history that had three or more players at that level. If the current stats hold through seasonÃ¢â‚¬â„¢s end, the 2018 Reds would become the 1st team in the last four years, the 7th team in the last 15 years, and the 18th team in the last 53 years, to have three players perform that well. Arbitrary numbers or not, this is not something that happens every year, or even every other year. If it is maintained for the second half, it would be a special occurrence that would make a memorable footnote on an otherwise disappointing season.

Taking a closer look at past teams who have accomplished his feat, it is impossible to deny the overwhelming success they experienced. 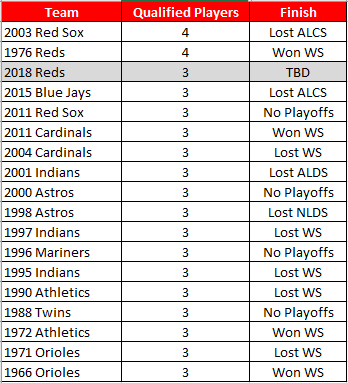 Of the group of 17 teams since 1966, four of them won the World Series (one of which is clearly superior to all others) and another five made it to the fall classic but came up short. That is over half that made it to the sportÃ¢â‚¬â„¢s biggest stage. Another four on top of that at least made the playoffs, bringing the total to 13/17 who have played in the postseason. The Reds would certainly be in the minority of teams with such a potent trio that was unable to be successful as a team.

To gain some more context, I was interested in the total number of players that reached this level of performance and how it changed from year to year throughout the league. Finding the percent of total players that each team was responsible for provides varying degrees of exclusivity depending on how rare this strong of a hitter was in any given year. 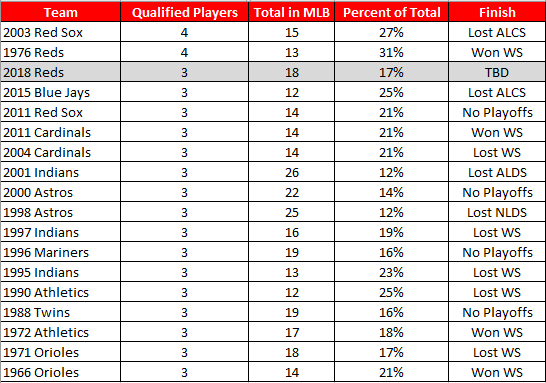 Some numbers that jump out right away are the clearly defined years of the steroid era, with an early notable group being the Bash Brothers (plus Ricky Henderson) and a fairly consistent stretch of teams all the way through 2004. This seems to peak with very high totals for players that achieved this mark during the Ã¢â‚¬â„¢98, Ã¢â‚¬â„¢00 and Ã¢â‚¬â„¢01 campaigns. All three of those teams with three big sluggers failed to advance past the Division Series, a testament to the plethora of good offenses during that time.

The Reds do make a big splash here but it is not the 2018 squad. The Big Red Machine, fresh off the World Series victory in 1975, rostered four players with a wRC+ of at least 143 (can you name them without looking? It is harder than you might thinkÃ¢â‚¬Â¦). That was 31% of all players in the league that hit that well. As we all know, that lineup was historically good (120 wRC+ overall) and not even the Yankees (112 wRC+) could give them a fair fight that year.

The Reds “Big Three” may not keep their prolific offense going all season, but if they do they will give the Reds an interesting tidbit to hold on to through these long, rebuilding years. More importantly, they will continue to be fun to watch and provide a bit of excitement and optimism heading into next year.