After a thrilling win yesterday in which Reds pitchers continue to reaffirm there should be no designated hitter in the National League, the Reds will try to split this four game series with the Milwaukee Brewers this afternoon at GABP. First pitch is at 1:10 ET.

Yes, Matt Harvey still has an ERA above 5.00 for the season. Does that help his trade value? No, but the fact that in his last two starts, he has a 2.13 ERA in 12.2 innings pitched with two walks and eight strikeouts helps his trade value. If he can continue to pitch like that, the Reds can definitely get something for him at the trade deadline.

Harvey’s fastball velocity has increased almost two miles per hour since April and early May. He’s also throwing more sliders now than he did early in the season, and he’s locating his pitches better. When Harvey is having a bad game, it’s partly because he’s walking batters. When his command is pinpoint, he is more likely to have a better game.

Of Brewers’ hitters, the one who has the most success against Harvey is Lorenzo Cain, who is on the disabled list right now. There are a few other Brewers who have had success off him as well, but in limited at-bats. And no, Eric Thames does not currently have a home run off Harvey. 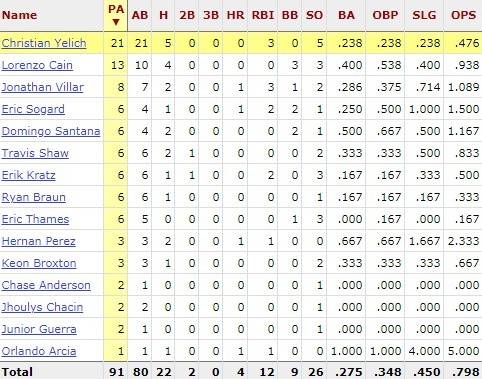 The Brewers called up their 10th-ranked prospect according to MLB.com, Freddy Peralta, in mid-May to replace Chase Anderson when Anderson went on the disabled list. The 21-year-old pitched so well that when Anderson came back, Peralta stayed in the rotation. Through four starts, Peralta has 35 strikeouts in only 22.2 innings. He’s walked nine, but has only given up one home run.

Peralta has three pitches: fastball, curveball and change-up. He likes to throw his fastball, as he’s thrown it 80.3% of the time this season, and then mix in his curve. He has rarely thrown his change-up (2.9% this season).

The Reds lineup is posted. You can find the Brewers lineupÃ‚Â here.

The Reds may still be in last place, but for the month of June, they were the best in the Central. I’ll take it.

Michael Lorenzen made history with his grand slam.

Michael Lorenzen has now hit a home run in each of his last 3 official AB. He had 2 HR in 56 career AB prior to this stretch.

He's the first primary-position pitcher with multiple pinch-hit HR in a season since Brooks Kieschnick in 2003, who also had 2. pic.twitter.com/AhDedwshVe

Per our friends @EliasSports, Michael Lorenzen is the first batter whose primary position is pitcher to produce a pinch-hit grand slam since Tommy Byrne on May 16, 1953 for the White Sox at Yankees.

The 18 strikeouts by Reds pitchers is a new club record for a 9-inning game. The previous record of 17 strikeouts was accomplished 4 times, most recently on 6/18/2013 vs Pit.

Only FIVE more days to get Scooter Gennett to the All-Star Game. He deserves it. (Oh, and vote for Eugenio Suarez and Joey Votto too).

A long time ago (back in the '90s) at a baseball field not so far away, a young Scooter Gennett met 1980 MLB All-Star Game MVP Ken Griffey. @Sgennett2, too, could become an All-Star Game MVP, but first he needs your help to get there!#VoteScooter ? https://t.co/CRorYzCWrK pic.twitter.com/pva5KMOOl1

After Lorenzen’s week at the plate, I’ve seen people mention that he should be the DH in AL ballparks or that he should play center field. I’m of the opinion that he should get a chance to start first. The Reds should try with Lorenzen what the Angels were doing with Ohtani before he got injured, except for one difference.

Lorenzen is proving that he can pitch in the bullpen (1.93 ERA in 23.1 innings since coming off the DL). Let him start every five days, but instead of putting him in the everyday lineup, use him as a pinch hitter when he’s not starting. That way, he’s able to get at-bats nearly every day and still able to show his skills on the mound. I just don’t think the Reds should give up on him as a starting pitcher yet. And I like the idea of a rotation consisting of Desclafani-Mahle-Castillo-Lorenzen-Romano (or sub in another fifth starter from AAA-Louisville). Also, yes, Homer Bailey is missing from that list.

All statistics are from Baseball Reference and FanGraphs.