No aspect of baseball through its history has changed more than pitching. Underhand to overhand. Soft toss to max velocity. Adding a mound and rubber. The introduction of players who were pitching specialists. Then relievers. Relievers used for fewer than three outs. For exactly three outs. Firemen and the disappearance of firemen. Measuring pitch speed and exit velocity with radar.

Yet another revolution in pitching practice began a couple years ago. It’s occurring right before our eyes. We’ve had a front row seat.

The Waning of Starting Pitching

Reds fans cheered for one of the last traditional pitching staffs: A five-man rotation, every starter expected to pitch deep into games, plus a couple relief specialists who followed for one-inning appearances primarily in games the team was ahead.

In 2012, the Reds rotation of Mat Latos, Johnny Cueto, Homer Bailey, Bronson Arroyo and Mike Leake made 161 of the team’s 162 regular season starts. Four of those pitchers threw 200+ innings. Leake tossed 179. Sean Marshall pitched the eighth and Aroldis Chapman the ninth. Manager Dusty Baker and his pitching coach Bryan Price presided over a pitching staff considered ideal at the time.

Six years later, that structure has been increasingly abandoned. 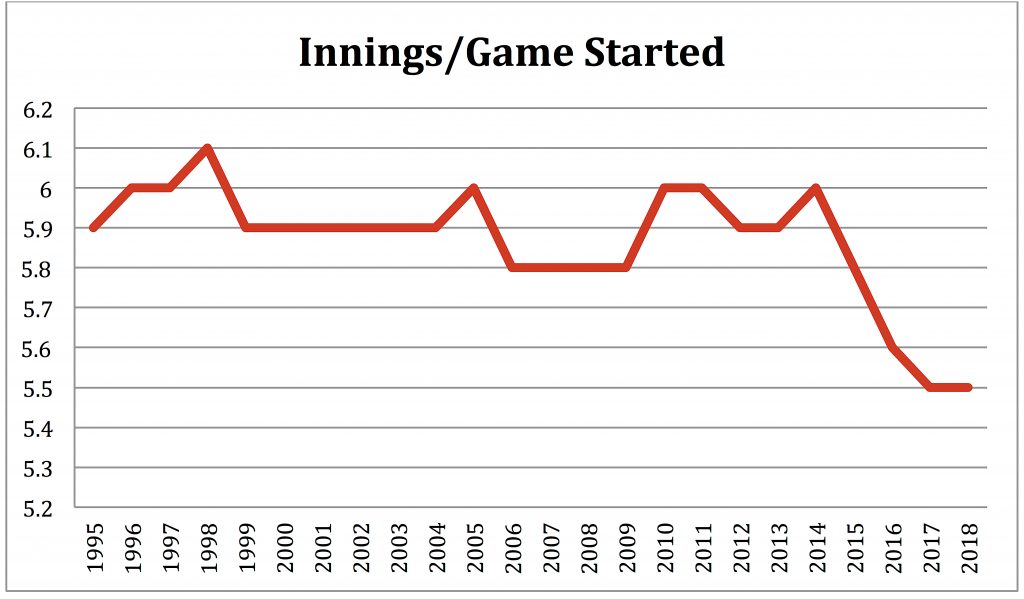 Innings are being spread to more pitchers. In 1941, Joe DiMaggio faced just 55 different pitchers during his 56-game hitting streak. Joey Votto faced 59 in his last 23 games. In each of the past five seasons, a new record has been set for total pitchers used, increasing from 662 to 755.

What lies behind the sudden shift in innings pitched from starters to a ever-growing bullpen?

One factor behind the decline in innings pitched by starters is an over-reaction by managers to the unexpected spike in home runs and run scoring that began after the All-Star break in 2015.

But the second cause is practice catching up to knowledge.

In The Book: Playing The Percentages In Baseball (2007), authors Tom Tango, Mitchel Lichtman and Andrew Dolphin presented data that starting pitchers became significantly less effective the third time they faced batters in a game. The Third Time Through Penalty (TTTP) has existed a long time, maybe since the introduction of overhand pitching.

The Book’s data went back to 1999 and included nearly a half-million plate appearances. The authors found that wOBA (weighted on base average) rose from .345 to .354 to .362 through the first three times of the batting order. Data from subsequent seasons has confirmed the gap between the first and third at bats has remained large and steady. 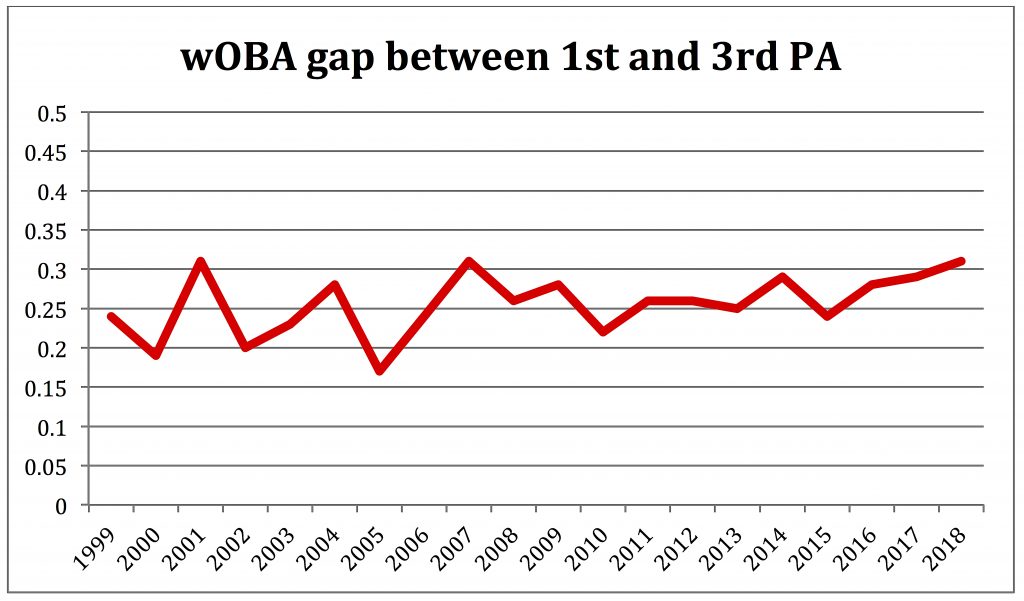 Lichtman’s (2013) comprehensive follow-up on the TTTP found the greater success for hitters the third time through the lineup wasn’t due to pitcher fatigue. It was due to familiarity. The batter’s edge grew the more times he saw what the pitcher threw. Later research showed a longer first at-bat pays off later in the game in fewer strikeouts, more walks, more hits and greater power.

What’s more, pitchers that rely primarily on one pitch face a larger TTTP. Additional research by Lichtman (2013) demonstrated that pitchers who are primarily fastball pitchers, defined as throwing at least 75 percent fastballs, have more than double the third-time penalty than those with much lower fastball frequency. The fewer pitches a starter has in his repertoire, the more quickly a batter becomes familiar and adjusts successfully.

In 2017, the wOBA for starting pitchers the third time through the lineup was .340. For relievers the first time through, it was .309. The first-to-third at bat gap is now about thirty points, or roughly the difference between Joey Votto and Scott Schebler this year.

Teams are taking the third-time through penalty seriously. Here are a few quotes about it, including one that might surprise you.

“I don’t argue with the numbers, certainly. I think the real trick is trying to figure out every other decision that’s impacted by that decision. The first pitching decision you make in a game lays out a whole other tree of decisions that might come the rest of the game. It’s certainly something we’ve talked about. We talked about it yesterday for quite a while, and it’s something we’ll continue to talk about. You’re definitely cognizant of it, and for every team, I think more and more they’ll be cognizant of it.” — Craig Counsell, manager, Milwaukee Brewers

“It’s becoming more an more evident throughout the league the sixth inning is a heck of a time. It’s really a tough one in the modern day for people to get through. We’ve experienced it many times. We don’t have that analytics department not to use it. They’ve been right on this third time through the lineup. We’ve gotten some teams in the sixth inning. But we’ve been particularly challenged in the sixth. It’s sinking into me the information that’s been put in my head. You see it happen. It’s hard to deny it.” — Jim Riggleman, manager, Cincinnati Reds

In the past couple weeks, the Reds have been in several games that fit this pattern. On June 9 (Carlos Martinez), June 12 (Jason Hammel), June 19 (Michael Fulmer) and June 21 (Kyle Hendricks) the Reds were held in check until the third time through the batting order. Most examples of the TTTP aren’t that extreme, but the data shows it’s a common occurrence.

Implications of the TTTP for the Reds

Accepting the data on third-time penalties leads to profound changes in the way major league pitching staffs should be constructed and managed. It also implicates strategic thinking for trades, free agency and the draft.

The Starter Role From the start, don’t plan on getting 1,000 innings pitched from five starters. Reducing per-game workload for starters will make them better and healthier. Research on the cause of pitching injuries is frustrating. But in general, throwing is nowhere near as dangerous to a pitcher’s arm as throwing while tired. Starters can throw harder if they know they are expected to attempt fewer pitches. Look no further than Amir Garrett’s fastball velocity this season. Relievers are much more effective facing a batter for the first time than starters are facing batters for the third time.

In-game Managing Managing the fifth and sixth innings is crucial. Pitching changes must become proactive instead of reactive. The manager should use times-through-the-lineup as a major factor in the decision of when to pull the starting pitcher, with the presumption against allowing a third time. Managers must trust the data and not what they see, in this sense: When a pitcher looks great the second time through the bottom of the order, it doesn’t at all mean he’ll handle the top of the order for the third time the next inning.

Four-pitcher Rotation The TTTP doesn’t foreshadow the end of the starting pitcher, although some analysts predict that. It calls for a reformulation of what starters do. Pitchers with 3-4 successful pitches have huge value in working regularly through two times in the order. In fact, cutting starter roles back this way might allow 4-man rotations, which means concentrating starts among the team’s four best pitchers.

Relievers The TTTP data reinforces the conventional wisdom that pitchers with limited portfolios should be relievers. Relievers should be groomed to throw two or three innings — to face the order one time. Teams must develop six, seven or eight reliable bullpen arms, not just two or three to close out the last three innings of games with leads. [More on how to acquire those relievers in an upcoming post.] Relievers with options so they can be sent back to the minors for short periods of rest to keep their arms fresh are valuable.

Pitcher Acquisition and Contracts Clubs shouldn’t chase veteran 200-IP-style starters in trades or free agency. The number of actual Corey Klubers and Max Scherzers is small and decreasing. Multi-year, big-dollar contracts to top-line starting pitchers aren’t usually worth it. Instead, shop for young starters who can handle five-inning stints at high intensity. Don’t bother looking for or promoting pitchers who have success with third-times through over a small sample size. Lichtman’s research shows that deviations from typical TTTP are not predictive of future performance. It’s better to consider short-term third-time success an indicator of future regression instead of a skill.

Draft Strategy Pursuing pitchers with a high first round pick is probably not worth it. The Reds recent strategy of using the first pick for position players then the next couple on pitchers with big arms seems like a good way to go.

Back to the Reds: Paradigm Shift, Hiring a Manager and a Good Situation

Baseball has undergone radical transformation in many areas since the 19th century. But it’s hard to avoid the sense that the rate of change has sped up during the past ten years. In large part, that’s due to rigorous data collection and intense analysis of the sport. A person who was one of the top minds in baseball 15 years ago could be out of date today.

Front offices are (re)learning how to win games. They have to be smarter and nimbler than ever before in figuring out how to score and prevent runs. The change in thinking required has become a never-ending high-speed ride. New data and strategies are forcing team executives to innovate or fail.

The implications of the data on third-time through penalty are significant. The past two seasons have witnessed the beginning of a radical departure from the last hundred years in assumptions of how clubs should acquire and use starting pitchers and relievers.

For major league organizations to keep up on TTTP, a paradigm shift must take place in language and expectations. That’s the case not only for front offices and managers, but also players, agents, owners, fans and even the team’s broadcasters. Our minds get anchored to certain numbers we consider meaningful — like starters going 7+ innings or throwing 200+ innings for the year — and we have a hard time adjusting expectations, even when league-wide benchmarks move.

The complexities in adapting to the TTTP data are an example why it’s so important to have a manager now who is not only open to new ideas backed by research, but one eager to implement them. It might be unrealistic to expect old-school pros who have been using one strategy for decades to accept change this fundamental this quick. That’s a reason younger, open-minded candidates, with no previous experience as major league managers, can be the best choice in today’s fast-changing environment. It’s no coincidence the Yankees, Red Sox and Dodgers — organizations that can hire whomever they want — did just that with their last hiring cycle.

While there’s still work to be done, the good news is the Reds roster is well situated to take advantage of the new pitching formula. The club has young starters who have proven capable of working twice through lineups. Instead of focusing on going seven or more innings, they should work on perfecting the first five or six. Equally important, the Reds have great young pitchers who toggle between starting and relieving. It’s hard to imagine a group better suited to getting an entire opposing lineup out exactly once than Michael Lorenzen, Amir Garrett, Sal Romano and, for that matter, Raisel Iglesias and Homer Bailey.