The Short Version: Jose Peraza and Scooter Gennett were the big bats, and the Reds bullpen turned in a magnificent performance to give the Cincinnati Reds their ninth win in ten games.

The Good
–Jose Peraza homered and tripled, scoring two runs in the process. Scooter Gennett doubled, singled, scored a run and drove in another. Scott Schebler singled, walked, and scored a run in the leadoff spot. Curt Casali was 2 for 4, and is now hitting .407/.448/.630 as a Red.

–The Reds bullpen did a magnificent job, tossing five innings of one-hit, shutout baseball, giving the Reds a shot at coming back from a 5-3 deficit. Kyle Crockett, Jackson Stevens, David Hernandez, Jared Hughes, and Raisel Iglesias were all pretty good today.

The Bad
–Luis Castillo retired the first 11 batters he faced — that’s the good part. He then issued an 11-pitch walk to Freddie Freeman in the fourth inning, and the wheels fell off. Shortly thereafter, I received this text: 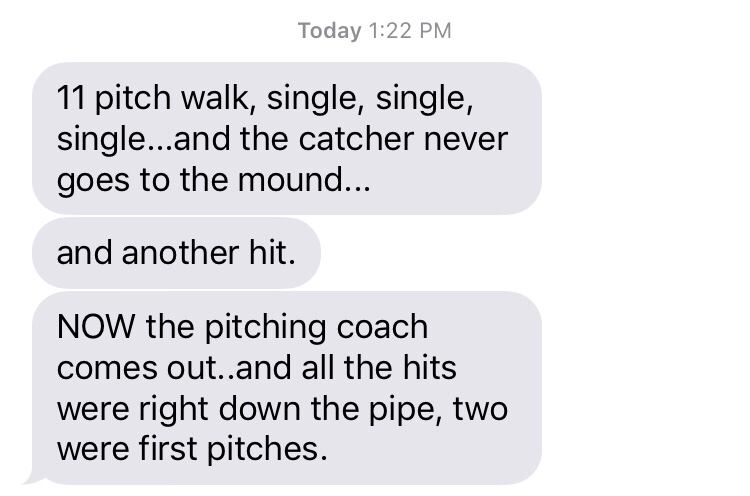 Castillo gave up four runs in the fourth and one in the fifth before he was sent to the showers. Another promising start that blew up in his face. Castillo’s final line: 4 innings, five runs allowed (four earned) on six hits and one walk, with four strikeouts.

–Peraza misplayed a fifth inning ground ball with the bases loaded that permitted a run to score (rather than ending the inning).

Not-So-Random Thoughts
–That’s nine wins in ten games for the ol’ Redlegs, and 12 wins out of their last 15. This team is on a roll, and it’s kinda fun, eh?

–Home plate umpire Carlos Torres ejected Joey Votto in the top of the first, after Torres made a very questionable strike three call and Votto expressed his displeasure. It’s the eighth time Votto has been ejected in his career.

–The Reds got on the board first, in the top of the second inning. Adam Duvall walked with one out and Curt Casali singled him to third. One out later, Billy Hamilton singled Duvall home with the game’s first run. The next inning, Peraza doubled the lead with a leadoff home run to left.

–After Castillo’s meltdown, the Reds were behind 4-2. They grabbed one of those runs back in the fifth when Peraza tripled and was brought home by Brandon Dixon’s single to center field.

–Cincinnati was down 5-3 in the seventh when the bats started rolling again. Schebler led off the inning with a walk, but Peraza and pinch-hitter Alex Blandino struck out. With two outs, the Reds collected four straight singles — from Eugenio Suarez, Scooter, Duvall, and Casali — and grabbed a 6-5 lead that they would not surrender.

–Kyle Crockett — a former University of Virginia Cavalier, by the way — has been nearly perfect since joining the Reds. Even though he still looks like he’s twelve years old.

–Let it be known that the Reds are only the third-worst team in the National League at this point.

–The Reds are only 13 games out of first place. With first place Milwaukee coming into town for a four-game series beginning on Thursday, the Reds have a chance to climb right back into this division race. (If you’re wanting to look at this thing optimistically.)

If the Reds win today and sweep the Brewers, they can get to 9.5 games back by the end of this weekend.

How often have the top three hitters in a batting order all been acquired in the same trade?
1. Schebler
2. Peraza
3. Dixon#FrazierDeal https://t.co/YqkKxYEFvZ

when somebody says scooter doesn't deserve to start in the all star game pic.twitter.com/hSfYgJsokv