Jesse Winker is a good baseball player. He has proven this by being drafted in the top 50, producing in the minor leagues and earning top prospect rankings in both the Reds organization and the entire league. He played very well for the Reds in his brief stint last year, and he played very well to begin the 2018 season. He did not, however, play well during the month of May. So what exactly happened?

The short and easy answer is that he was in a slump. But hitters go into slumps all the time, so that does not really tell us anything. We want to know what the cause of it was.

You may have heard people saying that pitchers had made adjustments against him and that Winker had not found a way to adjust back, but the truth may be something simpler than that. Winker just did not hit well.

WinkerÃ¢â‚¬â„¢s calling card without a doubt is his hit tool. Watching him take at-bats draws easy comparisons to Joey Votto with his great patience and ability to seemingly put the bat on any pitch he sees. With that said, it makes sense that taking a less disciplined approach would affect his performance. 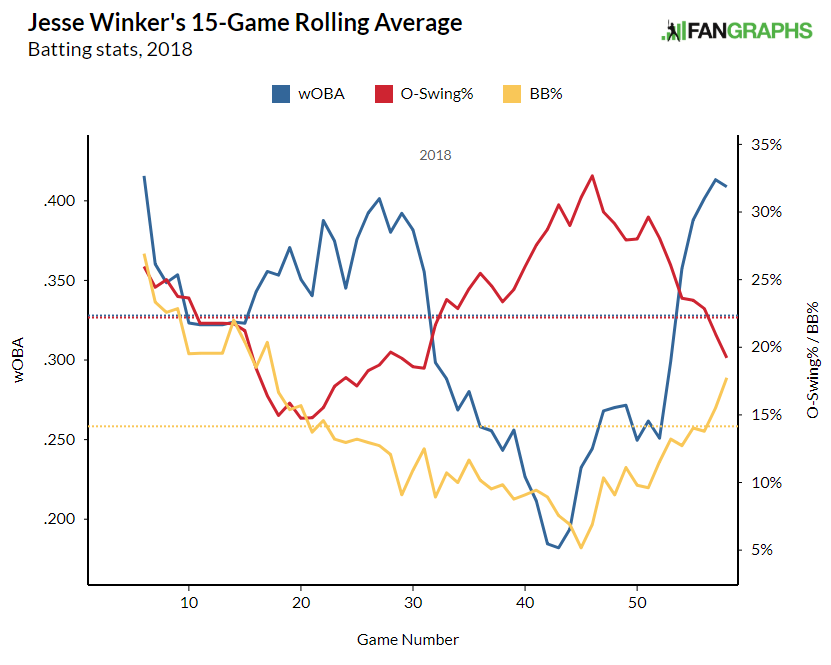 After a great start to the year in terms of plate discipline, Winker started swinging at a lot more pitches outside the zone, which coincided with a steady decline of his BB% (though it was still high at 11.6%). Interestingly, his K% dropped even more and actually gave him a very high 1.29 BB/K ratio for the month. So while fewer walks definitely contributed to his decline in production, it was not like he was all the sudden swinging and missing a ton.

That narrows the issue down to the actual contact that he was making, which was slightly weaker and very groundball heavy, leading to a very low BABIP. These factors were essentially directly related to his production. 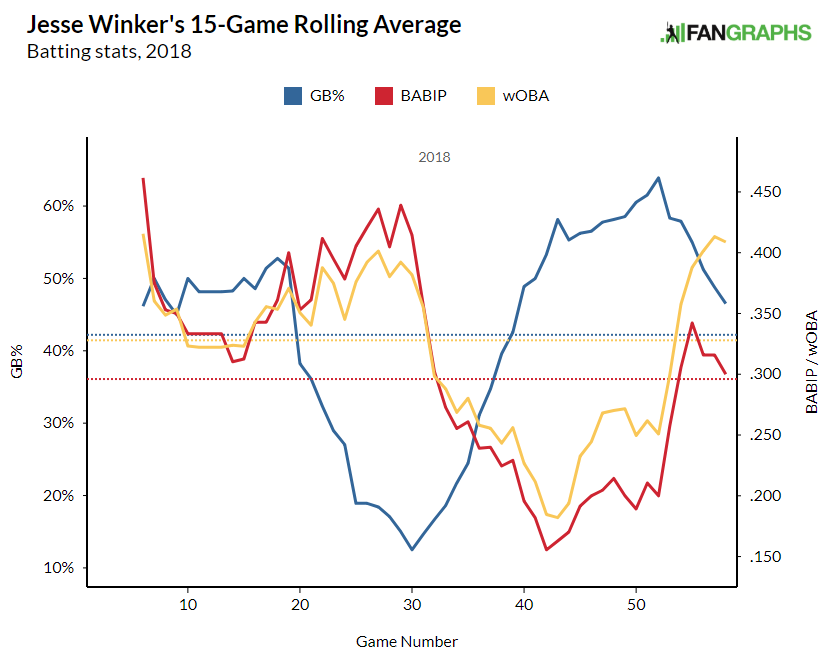 Going back to the statement earlier about pitchers making adjustments, it does not appear that this was anything that pitchers were necessarily in control of. Pitch velocity was down slightly (89.2MPH vs 89.9MPH), but the types of pitches Winker saw were essentially the same ones that he tuned up in April. The only difference was that Winker put significantly more balls on the ground.

If the pitch types were basically the same, then maybe it was the pitch location. Throwing more balls down in the zone would lead to more grounders. Maybe pitchers were exploiting something there? 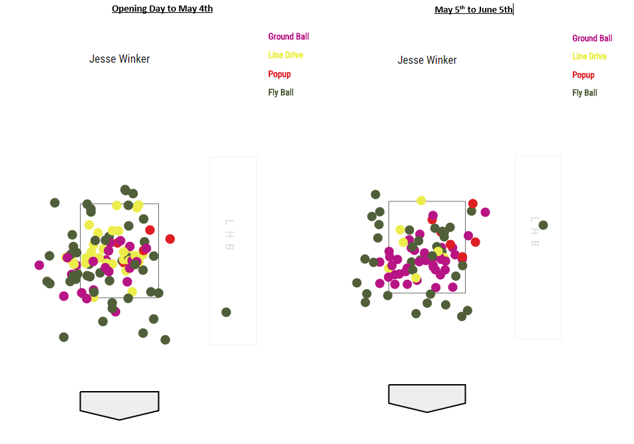 That does not appear to be the case. The locations are slightly different and maybe a little more down and inside, but it is not like there was an assault on the bottom edge of the zone. The difference was that rather than hitting line drives like he did in April, Winker was hitting grounders to the defenders.

Taking another look at the huge drop in BABIP provides a little more insight. While a .385 for April is a bit high, coming all the way down to .180 for an entire month is more than just regression. There was definitely some bad luck at play there. Statcast helps validate that with xWOBA, which was significantly higher than Winker’s wOBA during both March/April (.407 vs .359) and his slumping May (.297 vs .237).

Another good look at how Winker’s fortune changed on ground balls is by looking at his Radial Chart produced by Baseball Savant. He Ã¢â‚¬Å“toppedÃ¢â‚¬Â 12 more balls during his slump than he had leading up to that point (30 vs 18) and had a significantly lower batting average on those balls (0.66 vs .277). That drop alone is significant, especially considering the small samples.

Opening Day to May 4th (Only Topped Balls Showing) 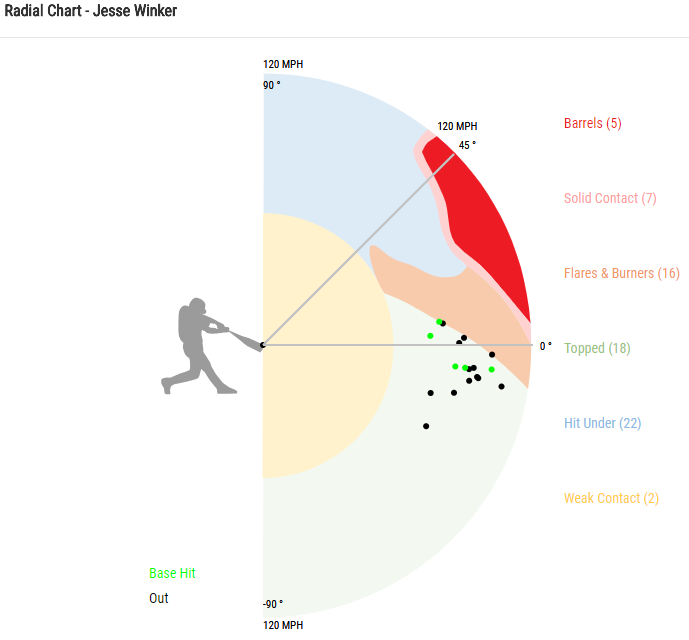 May 5th to June 5th (Only Topped Balls Showing) 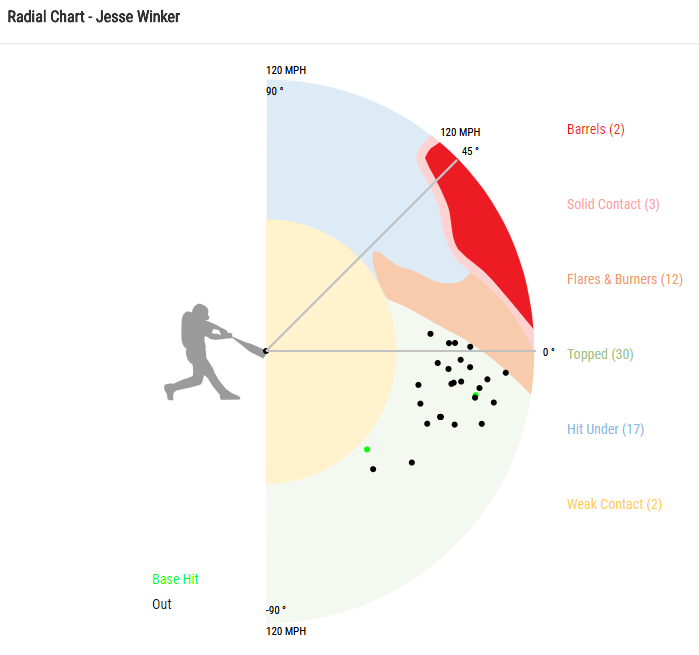 Taking into account that he also had less quality contact in terms of Barrels and Solid Contact, it becomes clear that Winker simply ran into a rough stretch of hitting. This happens to every single player, even the superstars. Mike Trout had an 0-22 stretch earlier this year that saw his BABIP bottom out at 0.71 over 8 games. It didnÃ¢â‚¬â„¢t last a whole month, because, well, he is Mike Trout. But the bottom line is that whatever Winker went through seems to have been temporary and was simply a growing pain for a still young and promising hitter.