As much as I want to write more about the Reds rebuild, or how the team will be good with one or two more prospects, or how maybe we just need (another) management change, I really don’t want to write about that. I can’t take it right now. Writing about the Reds at this point feels a lot like writing about U.S. Men’s Soccer because both are terrible with illusions of grandeur and almost no willingness to change.

So instead of anything analytical or tactical or practical this week, we’ll be returning to Rain Delay’s roots, and I will tell you who to root for in the World Cup based on your favorite Cincinnati Reds’ player. Consider this a once in a lifetime opportunity to develop an appreciation for the global sport, or maybe consider it an opportunity to root for a team that knows how to win, or maybe just consider it a four week respite from awful Reds baseball.

If there’s anything that Reds fans and Argentina fans share it’s the feeling of having one of the best players in the sport on your team and wholly wasting his talents away. Lionel Messi will likely go down in history as the best soccer player to grace this earth, and yet the likelihood of him winning a World Cup keeps slipping away. Also his antics on the field Ã¢â‚¬â€ and by antics I mean making opponents look foolish Ã¢â‚¬â€ rival Joey’s buffoonery.

Enigmatic, perpetually hurt, and probably overrated, Homer Bailey has been expected to live up to his immense talent for what feels like decades. Belgium boasts much of the same. And yes, Baily has thrown two no-hitters, and yes, Belgium once finished fourth at the World Cup, but have either really achieved anything?

Colombia is easily the best World Cup contender that everyone forgets about. While Brazil, Germany, and France get all the press, Colombia quietly lurks behind star James Rodriguez. Feels a lot like Eugenio Suarez’s treatment in the National League. We can only talk about Kris Bryant and Nolan Arenado so much, right?

What I love most about Tucker is that everyone thinks of him as a defensive first backstop, but sometimes he does something like this:

What I love about Egypt is that theoretically, they are a team built on defense, but they also claim Mo Salah, who does stuff like this:

Record breaker. History maker.
? Our top 3? from the king ? pic.twitter.com/f0hHezxwsy

They also both have stunning smiles and who doesn’t like a hero who smiles?

Nigeria is flashy, aggressive, and plays spectacular defense. They also just aren’t really that good. Sounds a bit like the Reds speedy centerfielder, doesn’t it? If you’re just looking to dabble in this World Cup, see some fun, entertaining soccer, but don’t really care about actual sustained skill, Nigeria is your club.

A hometown boy always plagued by inconsistent production that suddenly turns into a world beater many are convinced won’t last basically sums up both the Scooter Gennett and England experience. And besides, how can an American get more hometown than England? Harry Kane will certainly provide goals. Raheem Sterling will show flashes of brilliance followed by boneheadedness. And somehow, someway, England will advance before falling back to earth. Or will they?

Full disclosure: South Korea is my personal favorite team in the tournament, and it’s all because of Son Heung-min. My favorite player on my (and Chad’s) favorite Premiere League club Tottenham Hotspur, Son often comes on late in games to provide much-needed energy and a spark to a sometimes one-note lineup. Son will be starting for Korea, so all of you who still think Iglesias should open on the bump can finally live out your fantasy of a dynamic closer taking the lead. Oh, and South Korea could probably stand to be traded to a different group because drawing Germany and Mexico is just horrific luck.

The voting is over and you have chosen Sonny's winner v Palace as your 2017/18 Goal of the Season. ? ??#COYS pic.twitter.com/0aHIfkktWe

The truest underdog, Morocco has youth, determination, and a group with a recently coach-less Spain. If you’re looking to cheer for a Cinderella story of a team with talent and a whole lot of poise, these are your guys.

Here’s the thing about Switzerland: They’re pretty darn good at this whole soccer thing but everyone continually counts them out. Remember last World Cup when they were one extra time stop away from making it past the first knockout round? Remember when Amir Garrett dazzled as a starter, got hurt, and then never got a second chance? Betting on the Swiss may sound like a dumb proposition, but Amir Garrett also has the stuff to be an ace if you catch my drift.

Please explain to me why you shouldn’t root for dancing athletes. Or athletes that may lack the coordination of other athletes but still manage to succeed. Or athletes with amusing names like Winker and Runar Runarsson. I’ll wait.

Does he have immense amounts of talent? Yes. Does he have any way to consistently harness that talent and become the ace he’s destined to be? Right now, no. Such is the story of French soccer. They have all the talent in the world, from Antoine Griezmann to Kylie Mbappe to Paul Pogba, but most of the time it feels like they just accidentally manage to squeak past teams.

Anybody Else Ã¢â‚¬â€ Australia

I like you people Ã¢â‚¬â€ the ones who just refuse to choose someone with starter’s talent to be their favorite player. Be it Jose Pereza or Adam Duvall or Alex Blandino or Anthony DeSclafani, y’all enjoy the plucky, happy to get this much playing time type. There’s nothing wrong with that either. These players are often the most fun because when they do put it together, we can briefly talk ourselves into think they’re good enough to stay. So goes the plight of Australia. Never quite good enough to make it far, but always good enough to be on the world’s biggest stage.

And if you aren’t convinced the Socceroos represent the best of baseball journeymen, this guy, now nearly 40, is still on the team 12 years later:

Prospect to Watch:Ã‚Â At the beginning of the season, against all conventional wisdom, I stashed Jake Bauers on my roster. He was the Rays No. 5 prospect and a big power type of corner outfielder. Everything I was reading said he could be up by the end of April when C.J. Cron inevitably struggled at first, but then Cron never struggled. Well, Bauers is up in the bigs now and over 29 plate appearances, he’s doing what everyone expected him too. A .308/.379/.538 slashline will play, regardless of position, so if Bauers keeps producing, he’s a must-add already.

On the views front, I’ve entered a holding pattern of sorts, stuck between Jason and Matt. But because the only competition I care about is Matt, I’m just going to start playing park the bus and coffin corner the ball for the rest of the season. Happy World Cup everyone! 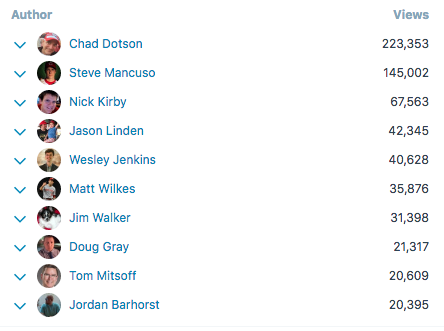