Like much of the young pitching the Cincinnati Reds have featured this year, Tyler MahleÃ¢â‚¬â„¢s season has been filled with ups and downs. HeÃ¢â‚¬â„¢s sporting an xFIP of 4.16 through 75 innings pitched in 2018, and while thatÃ¢â‚¬â„¢s not an awful number, itÃ¢â‚¬â„¢s below average. HeÃ¢â‚¬â„¢s also walking more guys than the MLB average (3.36 BB/9) and isnÃ¢â‚¬â„¢t wowing anyone with his strikeout numbers (8.16 K/9, solidly league average).

Despite all of this, and partially because of it, IÃ¢â‚¬â„¢m going to make the argument today that the Reds should lock up Tyler Mahle to a long term contract this season.

WeÃ¢â‚¬â„¢ve seen what Mahle can do when heÃ¢â‚¬â„¢s Ã¢â‚¬Å“onÃ¢â‚¬Â. Having cruised through the minor leagues with some very impressive statistics, Mahle got to the majors last season and impressed. His shiny 2.70 ERA looked a little worse when you started looking at the advanced statistics (his 134 FIP- was the biggest eye sore), but it was clear that with a little more seasoning, Mahle would be a Ã¢â‚¬Å“guyÃ¢â‚¬Â at the major league level for years to come.

Figuring to probably start the season in AAA, Mahle came out of camp in 2018 impressing the Reds brass, enough to earn a starting role from the jump. He came out of the gates strong, pitching 6 innings of shutout baseball against the Chicago Cubs on April 2nd, but struggled in his next outing against the Pirates, giving up 5 earned runs in only 4.2 innings. These two games are a good microcosm of MahleÃ¢â‚¬â„¢s season; there are multiple instances of a great game bookended by two outings merely average or worse. He gave up 4 earned runs in three straight games against the Giants, Cubs and Rockies in May, before finally turning it on and impressing over his last few starts.

WednesdayÃ¢â‚¬â„¢s game against the Royals was a typical Mahle gem, holding the Royals offense scoreless through 6.1 innings. ItÃ¢â‚¬â„¢s outings like this that we as fans look forward to from Mahle. We know heÃ¢â‚¬â„¢s capable of performing at this level, but like the rest of the young Reds pitching, itÃ¢â‚¬â„¢s consistency weÃ¢â‚¬â„¢re looking for now.

ItÃ¢â‚¬â„¢s safe to say that if Mahle does find consistency, heÃ¢â‚¬â„¢d be a very valuable asset for a rebuilding team. His minor league track record, where he owns a nice 2.85 ERA over 5 seasons, shows that consistency might be a little more attainable for Mahle than it might be for some of the other young pitchers seeking the same thing.

So letÃ¢â‚¬â„¢s say the Reds crunch the numbers, conduct a personality test, or whatever else they might do to determine that Tyler Mahle is a good bet to be a consistently good pitcher at the major league level. Locking up young pitching hasnÃ¢â‚¬â„¢t been nearly as prevalent as signing hitters to early-career extensions has been, mostly because of the injury risk. No matter how good you are, or how good of a head youÃ¢â‚¬â„¢ve got on your shoulders, or how consistently you hit the strike zone with your fastball, an arm injury is always just one pitch away.

However, there are a few notable contracts for young pitchers signing extensions early on in their careers. WeÃ¢â‚¬â„¢ll take a look at two of them below, and then figure out where MahleÃ¢â‚¬â„¢s theoretical extension fits in with them.

In 2011, the Rays signed Matt Moore to a 5 year, $14MM extension after only 17 days of service time and 19 innings pitched in the big leagues. Those 19 innings were pretty impressive though, and 10 of them were strong playoff innings in the ALDS.

Moore had a solid, if injury-prone, career with the Rays before ultimately being traded to the Giants in 2016. Although the injuries sapped some of the upside the Rays were hoping to get in the deal, the money given up in the deal was miniscule. Considering the 2.7 fWAR Moore put up in 2012 alone, the deal was worth it for the Rays.

HereÃ¢â‚¬â„¢s how the deal looked on paper: 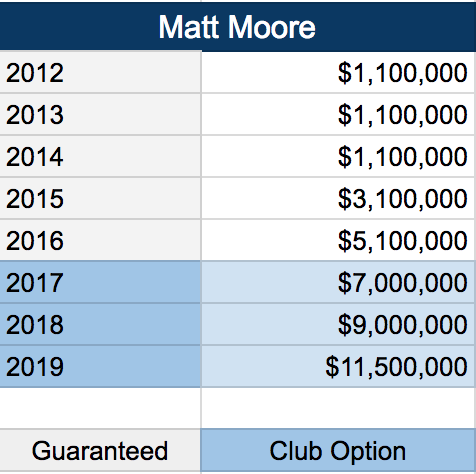 The deal at the time was absolutely unprecedented for pitchers with little service time. It came only a few months after the unprecedented deal the Rays struck with Evan Longoria, and looking back at it now, both deals were great for the Rays. As a small-market team in the same vein, the Reds must look to make deals like this in order to be successful over long periods of time.

Surprise, surprise: another contract from the Rays featured in this series. In 2014, the Rays signed stud pitcher Chris Archer to a six-year, $25.5MM extension after 156 days of service time. This contract is brought up almost every year, by every fanbase, as a contract theyÃ¢â‚¬â„¢d love to see their team trade for. Over parts of 7 seasons with the Rays, Archer has never had a below-average xFIP, has thrown 200 innings three times (and had a 194 inning season on top of that), and is generally an all around good dude. HeÃ¢â‚¬â„¢s the kind of pitcher any organization would love to have at the top of their rotation, and is doing it on the cheap for the Rays. No wonder we talk about them in these articles so much!

LetÃ¢â‚¬â„¢s take a look at the numbers: 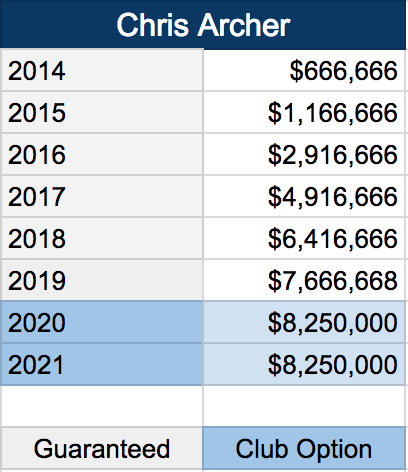 If we all agree with the common thought that 1 WAR is worth roughly $6MM, the Rays got their moneyÃ¢â‚¬â„¢s worth out of Chris Archer back in 2014. His 5+ WAR 2015 was merely icing on the cake. Again, the Rays rolled the dice and it paid off.

So, looking at these two players and the contracts that go along with them, what is Tyler Mahle worth? At the time of MooreÃ¢â‚¬â„¢s signing, he had just come off a season in which he pitched 9 innings of excellent regular season baseball, and 10 innings in the ALDS. He was widely regarded as a top prospect, and the fact that he was even extended at all was shocking to the baseball world. Archer obviously got more money in his deal, probably because the Moore deal set the market, and was generally considered a successful deal by the time 2014 rolled around. Archer was heading into his second full season in the big leagues, having just pitched 128 innings of 99 xFIP- baseball. He was almost as league average as you can get, which is extremely valuable at only 24 years old.

Tyler Mahle is 23, and is currently sporting a 105 xFIP- Ã¢â‚¬â€œÃ‚Â pretty close to ArcherÃ¢â‚¬â„¢s mark the season before he got his extension. The two paths are pretty similar, with Archer having the slight edge statistically. Archer was also the better prospect, although not by much, never breaking Baseball AmericaÃ¢â‚¬â„¢s top 25 list. Both pitchers routinely placed in the top 100, though.

If IÃ¢â‚¬â„¢m the Reds, ArcherÃ¢â‚¬â„¢s contract is a jumping off point. If IÃ¢â‚¬â„¢m Mahle, IÃ¢â‚¬â„¢m looking for more. At this point it was signed four years ago, so the money will likely need to increase at least a little bit. HereÃ¢â‚¬â„¢s what I see as a good balance between the two camps: 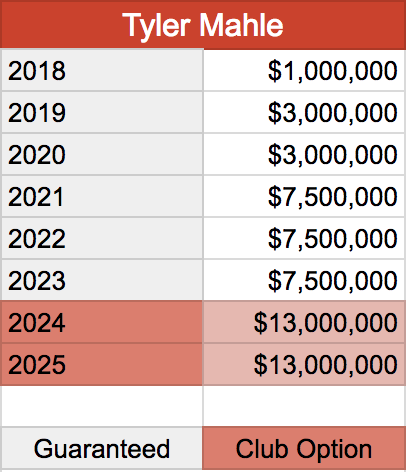 The Reds have expressed the importance of having multiple years of the same value in a contract in the past, and itÃ¢â‚¬â„¢s evident in the Eugenio Suarez deal. Here they get Mahle leveled off at $7.5MM for his three arbitration years, before heading into two club options covering the first two years of free agency. It wonÃ¢â‚¬â„¢t break the bank for the Reds, while also providing Mahle with the security of a long contract at the beginning of his career.