Billy Hatcher has become somewhat of a position coach legend in Cincinnati over the years. From fans adorning their shirts with his caricature, to him constantly garnering praise by the local media, everyone seems to love Ã¢â‚¬Å“HatchÃ¢â‚¬Â. The love fest with Billy Hatcher is well deserved. This is his 13th year in the Reds organization. He spent ten years as first base coach and just recently, in 2016, made a switch to coach third base. When he isnÃ¢â‚¬â„¢t winding his arm around like a windmill, sending base runners from third to home, he is joking with fans in the crowd and throwing balls to little kids. Billy Hatcher seems like a great human and a guy you want to have in the clubhouse.

Looking past that, though, I wanted to evaluate Billy Hatcher and the work heÃ¢â‚¬â„¢s done at third base. Just from an eye test perspective, it seems like the Reds have base runners thrown out at third or home pretty frequently. Now, I will admit, evaluating this is pretty hard. IÃ¢â‚¬â„¢m going strictly off of OOB3 (outs on base at third) and OOBHm (outs on base at home). These stats count how many times a player has been thrown out at third base or home on a base running play. These stats do not include caught stealing, pickoffs, or force outs (things that wouldn’t really involve Hatcher, anyway).

The caveat with these stats is that there are a lot of unknown variables. For example, how many times did Billy Hatcher tell a runner to stop at third base and the runner ignored him and went home anyway? Or, how many times did a player tag at second and try to take third at their own discretion? This applies to all teams really, so keep that in mind. 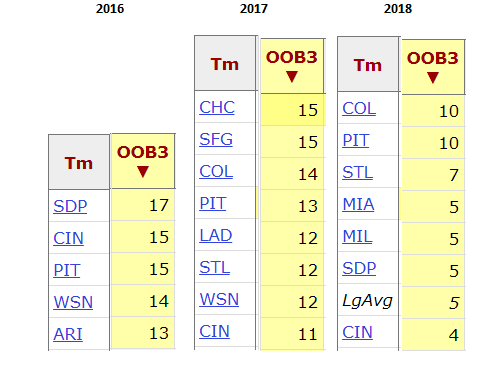 In two out of the three years since Billy Hatcher has taken over as third base coach the Reds have been below league average in runners being thrown out at third and were 2nd in 2016. This does include 2018 data which isnÃ¢â‚¬â„¢t complete yet.

For context, letÃ¢â‚¬â„¢s compare these numbers to the infamous Steve SmithÃ¢â‚¬â„¢s OOB3 and OOBHm the last year he was third base coach before he was fired:

So, what does all of this mean? It means that the Reds have been near the top of the NL in getting runners thrown out at home or third base the past three seasons. Who’s fault is that? I’m not sure we can make a conclusion on exactly who’s fault that is. It could be a number of things but the third base coach must be held somewhat responsible. IÃ¢â‚¬â„¢m not calling for Billy HatcherÃ¢â‚¬â„¢s head, but I think there is some room for improvement. Whether it’s working with Hatcher in the off-season, reviewing tape and seriously evaluating him, or moving him back to first base and finding an upgrade at third base coach. There are options that the Reds could take to improve their base running situation.

A runner being thrown out at third base or home during a game may seem pretty minute in the grand scheme of things, but those add up over the course of a season. The Mets had a league best 12 OOBHm last year and the Reds had a 20 OOBHm. When it comes down to it, in a contending year those 8 runs could be the difference between a win and a loss and ultimately a division title and missing out on the playoffs.