The Cincinnati Reds completed a two-game sweep of the Royals this evening, and have now won three consecutive games. Reds pitchers were dominant in Kansas City, allowing just one run in 19 innings. It was Tyler Mahle’s turn tonight, pitching 6.1 shutout innings. It appears as if Mahle has turned a corner in 2018. The Reds offense didn’t score until the seventh inning, but they quickly made up for lost time. Adam Duvall provided a night cap with a grand slam to give the Reds a 7-0 lead. 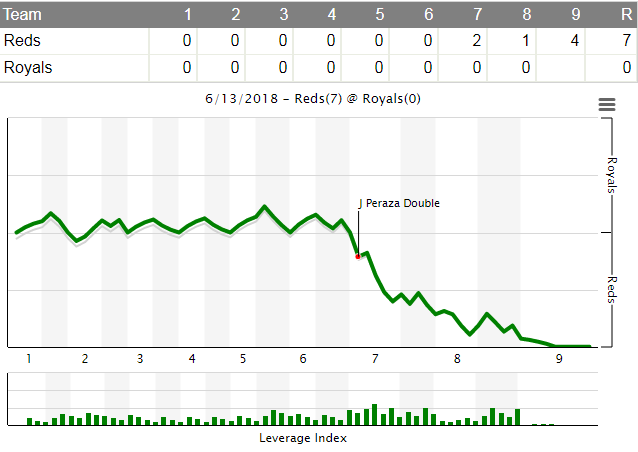 According to FangraphsÃ‚Â WPA statisticÃ‚Â (winning percentage added), the most important play of the game wasÃ‚Â Jose Peraza’s leadoff double in the 7th inning with the score tied 0-0.Ã‚Â That play increased the Reds chances of winning by 10.6% (from 50.0% to 60.6%). 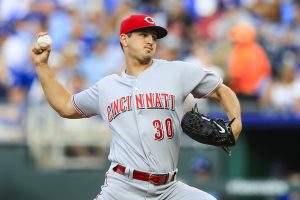 Mahle had his third consecutive good start for the Reds (1.12 ERA over his last 3 starts). Mahle only had 1 strikeout tonight (he had 11 in his last two starts), but he limited the Royals to just 3 hits and 2 walks. The Royals average exit velocity off Mahle’s fastball was 82.0 MPH. The average exit velocity in the MLB vs fastballs is around 88 MPH. The biggest thing for Mahle is that he has now gone 4 starts (21.1 IP) without allowing a home run.

Adam DuvallÃ‚Â blew the game open with a grand salami in the 9th inning. He got every ounce of it too (107.3 exit velocity).

Jose PerazaÃ‚Â had two hits tonight, including the biggest hit of the night (see above). Peraza’s OBP has crawled to .300. 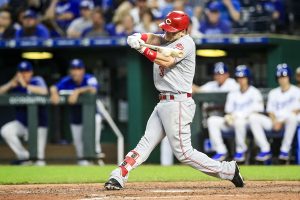 There was something up here about Adam Duvall going 0 for 3. But then he had to go and hit a grand slam. Jerk.

Just another fun night in the booth withÃ‚Â Thom Brennaman.Ã‚Â Thom said “this is brutal” when the Reds loaded the bases in the 9th inning, and one of his many tangents of the night included berating Jared Hughes (the Reds’ best pitcher in terms of not walking batters) for walking a batter.