It’s become a cliche, but the sentiment still holds true: the best pitch in baseball is a well-located fastball.

Overwhelmingly, the most commonly thrown pitch in the game is the fastball — whether it’s a four-seamer, cutter, or sinker — and it has been since the sport was invented. But as more data becomes available, there’s an interesting trend developing among starters. Fastball usage is on the decline. Since 2002, the first year PITCHf/x data is available, starters have gradually thrown the heater less.

There are likely many reasons for this. One cause is breaking balls are simply not hit as hard as fastballs, and the growing trend of using them in traditional hitter’s counts (2-0, 3-0, etc.) rather than a fastball right down Broadway keeps hitters off balance. Against fastballs, batters are managing an average exit velocity of 89.2 mph and a .453 slugging percentage in 2018. Versus breaking balls, those numbers drop to 87.0 and .353, respectively.

But there’s also been an emphasis on pitchers throwing their best offering more frequently, and it has occurred both with players who do and do not have a quality fastball.

Clayton Kershaw has done it. Masahiro Tanaka, along with basically every other Yankees pitcher, has done it. Patrick Corbin’s breakout season is in part attributed to it. But the most notable example in recent memory is Lance McCullers Jr. Yes, the same guy who threw 24 straight curveballs in Game 7 of the ALCS to help send the Astros to the World Series last year.

This video of Lance McCullers Jr. throwing 24 consecutive curveballs to win the pennant is glorious: https://t.co/YIDdsW8mDd

McCullers is one of the most extreme examples of “pitching backwards,” as his curveball is his primary pitch. Starting in 2016, he stopped trying to throw a fairly ineffective fastball the majority of the time and turned to the biggest weapon in his arsenal — a lot. Over the past three seasons, McCullers has thrown his curveball 46.9% of the time, by far the most in baseball among starters. He still uses his fastball, now preferring a sinker to a four-seam, but he’s cut its usage down to 40.9%. This season, he’s throwing it less than ever (39.7%) as he has mixed in a changeup more often.

For McCullers, the primary problem with his four-seam fastball had nothing to do with velocity — he could fire it at 99 mph, after all. Rather, command was the issue. Despite his electric stuff, he struggled to get ahead in the count with his fastball and the pitch got crushed when he came in the zone with it.

While not an identical case, Robert Stephenson fits a similar mold. The former first-round pick can dial his fastball into the upper-90s and average around 93-94, but it has been an ineffective offering because he can’t control it consistently. Traditionally, the fastball is meant to be a get-ahead pitch. Although Stephenson has used it on 57.4% of his big-league pitches, it has found the strike zone only 48.6% of the time. Among all pitchers who threw the pitch 500 or more times in 2017, only eight had fewer called strikes for every ball thrown than Stephenson (0.40).

But Stephenson continues to rely on it when he falls behind hitters anyway. In hitter’s counts, he’s thrown the fastball 58.2% of the time. With three balls, 63.9% of his pitchers are heaters. It’s not particularly surprising, then, that on 59 of his 72 career walks, ball four came on the four-seamer.

When he does throw it in the strike zone, he doesn’t excel at painting the corners or keeping the ball high or low enough that hitters swing through it. In his 121 2/3 major-league innings, the four-seamer has been crushed for a .324/.451/.606 slash line, and 16 of his 21 home runs have come on the pitch. Here’s a look at the career heat map: 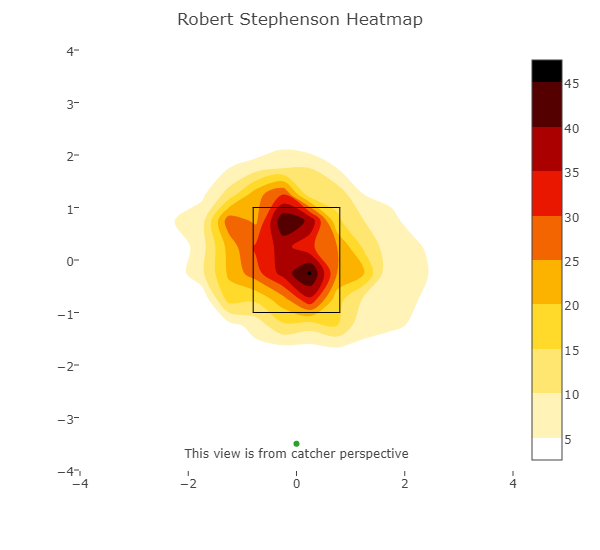 What Stephenson is missing in fastball effectiveness, however, he makes up for with his secondary offerings. His curveball held batters to a .148/.172/.259 slash line last year and had a respectable 13.0% whiff rate. His changeup registered a 21.2% whiff rate. Now we’re talking. Only 16 other pitchers in baseball who threw the pitch 200+ times had a higher percentage of swings and misses. Despite the strong whiff numbers, Stephenson doesn’t have the same dominant results (.263/.290/.404), but the pitch is a solid one when he keeps it down in the zone.

Neither of those would be the pitch to take the McCullers approach with, however. His best offering is, funnily enough, the newest addition to his arsenal: the slider. He just picked it up last year, and it’s already an elite-level weapon. The opposition managed an 83.8 mph average exit velocity (league average for SPs: 85.2 mph) and a pitiful .136/.177/.203 line against it when they put it into play, which wasn’t very often. Per Statcast, Stephenson got a whiff on the pitch 25.0% of the time he threw it. Of the 221 pitchers who used the slider 200 or more times last year, only 15 had a higher whiff rate than that. Among the names just ahead of Stephenson: Carlos Carrasco, Max Scherzer, Clayton Kershaw, and Zack Greinke.

Would increasing his slider usage and decreasing his fastball percentage unlock Stephenson’s potential? It seems plausible based on last year’s results. As the chart below shows, he gradually became more comfortable with the new breaking ball as the year moved on, using it around 30% of the time in his August and September starts.Ã‚Â And the results were promising. In those two months, he posted a 2.50 ERA and 24.3 K%. But that came at the expense of his curveball rather than the fastball, and his walk rate remained high at 13.1%. 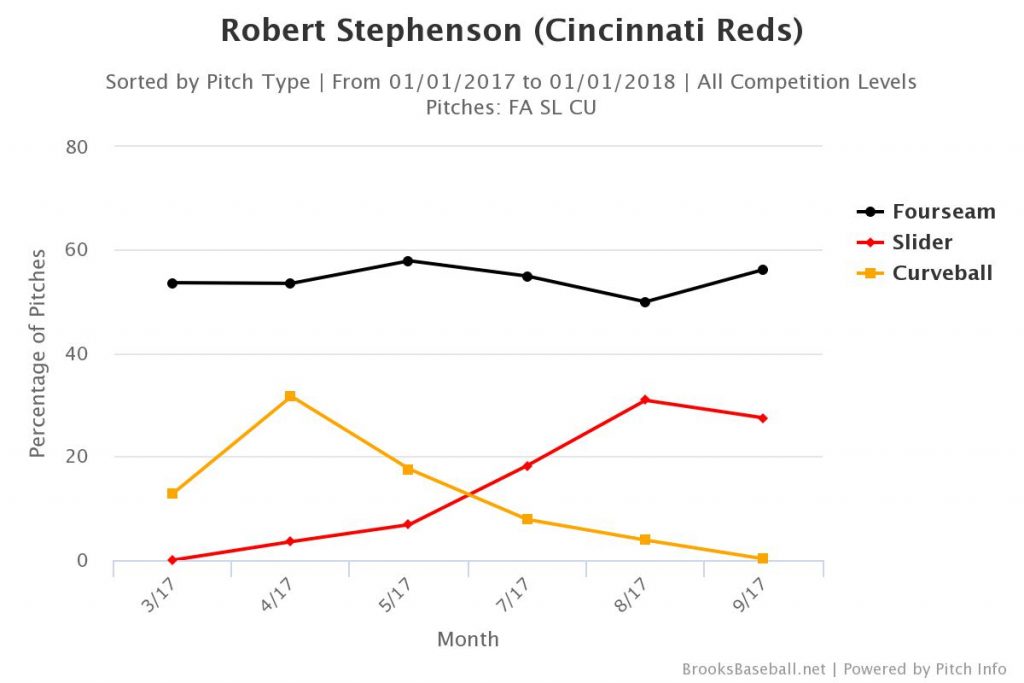 Would decreasing his fastball usage help him sort out the command problems? There’s no way of knowing unless he does it. I’m not a pitching coach, and I don’t pretend to be. The Reds have significantly more data than I do, so they may have concluded that this approach would be a complete disaster for Stephenson. Maybe he’s also unwilling to give it a shot. But just looking at these numbers, it’d be an interesting experiment to try.

Stephenson is again in the midst of an inconsistent season in Triple-A Louisville (4.11 ERA, 26.6 K%, 13.9 BB%) as he tries to claw his way back to the major leagues. His strikeout rate indicates his raw stuff is still strong, though the walk rate would tell you that fastball command remains an issue. Perhaps unfurling his best pitch with more regularity could be beneficial for the 25-year-old and help him become a mid-rotation-level starter or better. For a rebuilding team whose ace is arguably a pitcher with two starts under his belt in the last year-and-a-half, that would be a significant development.