With Father’s Day approaching, we wanted to bring you a piece of the book that will hit home with all fathers and sons. This excerpt fromÃ‚Â The Big 50: Cincinnati RedsÃ‚Â by Chad Dotson and Chris Garber is presented with the permission of Triumph Books.Ã‚Â For more information and to order a copy, please visit www.triumphbooks.com/Big50Reds. 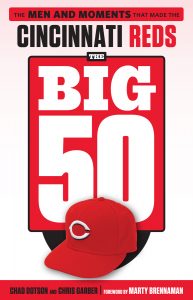 Ken Griffey Jr. is a Hall of Famer, a baseball legend, and an American cultural icon. He made his first All-Star team at age 20, won an MVP award and nine Gold Gloves, and was named to the MLB All-Century team at the tender age of 29. He’s sixth on the all-time home run list, among such names as Willie Mays and Babe Ruth.

But in the beginning, in Cincinnati, he was just Ã¢â‚¬Å“LiÃ¢â‚¬â„¢l Kenny.Ã¢â‚¬Â

His dad was the original Ken Griffey, a standout player for the Big Red Machine in the 1970s. Back then, Junior was one of a group of playersÃ¢â‚¬â„¢ kids who ran through the tunnels of Riverfront Stadium, taking swings in the batting cages, and generally wreaking havoc. There was LiÃ¢â‚¬â„¢l Kenny, as manager Sparky Anderson called him, and his brother Craig, Petey Rose, Pedro Borbon Jr., Lee May Jr., and Eduardo PÃƒÂ©rez, among others.

Sparky encouraged his players to bring their children to the ballpark, but he had a couple of rules. Kids were welcome in the clubhouse before games, and after games that the Reds had won. Not during the game.

LiÃ¢â‚¬â„¢l Kenny and Eduardo — his father was Tony PÃƒÂ©rez — were intimidated by Sparky. That didnÃ¢â‚¬â„¢t stop them from, on several occasions, sneaking into AndersonÃ¢â‚¬â„¢s office during a Reds game and swiping red pop from the managerÃ¢â‚¬â„¢s well-stocked mini-fridge.

Meanwhile, on the field, JuniorÃ¢â‚¬â„¢s dad was hitting balls into the gap and speeding around the bases for the fearsome Reds. Sometimes lost in the glare of JuniorÃ¢â‚¬â„¢s brilliant career is the fact that Ken Griffey Sr. was a great player in his own right.

Senior was a three-time All-Star and a member of two World Series champions with the Reds. In the second of those championship seasons, 1976, Griffey led the club with a .336 average; he narrowly lost out to Bill Madlock for the National League batting crown on the seasonÃ¢â‚¬â„¢s final day. GriffeyÃ¢â‚¬â„¢s .401 on-base percentage was third in the National League, trailing only teammates Joe Morgan and Pete Rose. Griffey was a genuine star who collected 2,143 hits in a 19-year big league career, and was inducted into the Reds Hall of Fame in 2004.

From the beginning, Junior tried to emulate his dad, but it was clear that Junior was a different type of player. While Senior once had 38 infield hits in one season, Junior was known for the high, majestic bombs that he would hammer to all parts of the stadium — even as far back as his days at CincinnatiÃ¢â‚¬â„¢s Moeller High School.

Once, as a teenager, Junior took batting practice on the field at Riverfront as Ken Sr. and his old teammate Tony PÃƒÂ©rez looked on. PÃƒÂ©rez was astounded. He turned to Senior, eyes wide. Ã¢â‚¬Å“DonÃ¢â‚¬â„¢t let anybody ever change that swing,Ã¢â‚¬Â he said. Ã¢â‚¬Å“ThatÃ¢â‚¬â„¢s a big league swing right now.Ã¢â‚¬Â

Memorably, Senior finished his big league career playing in the same Seattle outfield as his son. Ã¢â‚¬Å“A lot of times IÃ¢â‚¬â„¢d look over to center field,Ã¢â‚¬Â said Ken Sr., Ã¢â‚¬Å“and this is no lie, I still see the hat too big for his head, a baggy uniform, and heÃ¢â‚¬â„¢s got number 30 across his chest and back. ThatÃ¢â‚¬â„¢s a father-son game I was remembering when he was just a little kid and I was with the RedsÃ¢â‚¬Â¦.Relationships between fathers and sons are unique and different in certain ways.Ã¢â‚¬Â

Junior pulled on that number 30 uniform — his fatherÃ¢â‚¬â„¢s old number — in a real Reds uniform in 2000, when he was traded from Seattle to his hometown Reds. By June of 2004, Junior was on the chase for his 500th career home run.

The countdown began with home run number 495 on June 1. He hit number 499 on June 13 and as the media began shadowing his every move, Junior was forced to reflect on how he got there. Ken Sr. was never far from his thoughts.

A week later, Junior still hadnÃ¢â‚¬â„¢t been able to hit number 500. His extended family — including his father — had come to Cincinnati to see the big moment, and Junior was getting anxious. His teammates, however, were not.

With Junior unable to connect for the big blast in Cincinnati, his family was forced to follow the Reds on their road trip to St. Louis, but that ended up being the perfect way to conclude the chase for 500.

In fact, it could hardly have ended any other way. Junior was just waiting for FatherÃ¢â‚¬â„¢s Day.

Yes, FatherÃ¢â‚¬â„¢s Day, June 20, 2004, a bright, sunny day at St. LouisÃ¢â‚¬â„¢ Busch Stadium. Seated next to the Reds dugout were Ken Sr. and JuniorÃ¢â‚¬â„¢s children Trey, Taryn, and Tevin, ranging in ages from ten to two.

Before the game, Senior had offered his son some advice: forget about it. Ã¢â‚¬Å“Pick out a pitch you can hit,Ã¢â‚¬Â he told Junior. Ã¢â‚¬Å“Still get your base hits, and one is going to fly out.Ã¢â‚¬Â

Junior got another pregame visit, this one from Cardinals Hall of Famer Stan Musial. Musial had been born in the same town, Donora, Pennsylvania, as both Griffey men, 49 years to the day before Ken Jr. But he had another link to the Griffeys, as well. One of MusialÃ¢â‚¬â„¢s teammates on the Donora High baseball team was Buddy Griffey. Yep, Ken Sr.Ã¢â‚¬â„¢s father, JuniorÃ¢â‚¬â„¢s grandfather.

Musial wished Junior good luck, then laughed. Ã¢â‚¬Å“And hurry up and get this over with.Ã¢â‚¬Â

In his first two at-bats, Junior lifted high fly balls to center field. In the sixth, however, with the Reds leading 5-0, the moment arrived.

Cardinals starter Matt Morris was still on the mound, and he wasnÃ¢â‚¬â„¢t particularly eager to be a footnote to GriffeyÃ¢â‚¬â„¢s historic moment. Ã¢â‚¬Å“I stayed away with breaking balls,Ã¢â‚¬Â said Morris, Ã¢â‚¬Å“until on a 2-2 count, I tried to slip a fastball by him.

Junior turned on the inside fastball and hit a mammoth blast into the right-field stands. Cardinals right fielder Reggie Sanders didnÃ¢â‚¬â„¢t even chase after it.

Junior stood to watch the ball fly away, just for a moment, before dropping his bat and beginning his slow trot around the bases. The crowd of 45,620 stood and cheered enthusiastically, even though they were saluting an opponent.

As Griffey stepped on home plate, Dunn greeted him with a fist bump and a pat on the helmet. The rest of the team had also emerged from the dugout, and they took turns embracing Junior and offering congratulations. Reds captain Barry Larkin was one of the first players there.

Then came the moment that put a lump in everyoneÃ¢â‚¬â„¢s throat. Junior climbed over the camera well next to the Reds dugout, leaned over a railing and hugged a smiling Senior.

After collecting hugs from own children, Junior stepped back onto the field. He lifted his helmet to the crowd, and they roared even louder.

Not only had Junior knocked down the door to the 500 Club, but the home run was also his 2,143rd career hit — the exact number of hits collected by Ken Sr. in his major league career. Talk about a FatherÃ¢â‚¬â„¢s Day tribute.

Ã¢â‚¬Å“It was a nice FatherÃ¢â‚¬â„¢s Day present,Ã¢â‚¬Â Griffey Sr. said after the game, Ã¢â‚¬Å“but itÃ¢â‚¬â„¢s an easy way to get out of giving me something.Ã¢â‚¬Â

Junior laughed at that. Ã¢â‚¬Å“I always buy you Old Spice and underwear!Ã¢â‚¬Â he joked.

It was a special day, for two special Reds Hall of Famers who just happened to be father and son.