Last weekÃ¢â‚¬â„¢s news that the four-man outfield rotation was over, or at the very least on hold, probably did not come as a surprise to anyone, given how poor the overall performance has been. It makes sense to give three guys consistent reps to try to find their rhythm. The surprise still came, however, as the odd-man out was announced to be Jesse Winker. For many, this was a huge hit to any optimism that remained for the Reds to turn the ship around and shoot for contention next year.

Heading into the season, it seemed that the outfield situation would work itself out for the better and the team could focus its attention on the middle infield situation. That has not been the case, as poor play all around has thrust the outfield into an area of some concern. This is a continuation of a trend that has gone on for five years now. 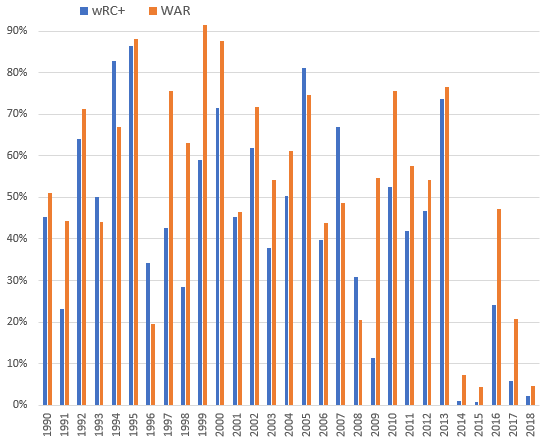 Life comes at you fast, and that could not be more accurate for the Reds outfield. Aside from 2016, which was still not even in the 25th percentile for wRC+, the past five years have been a barren wasteland of offensive production, starting with a monumental drop off from 2013 to 2014. Comparing the Reds outfielderÃ¢â‚¬â„¢s wRC+ to every other team for every season in major league history, the Reds 2014 and 2015 season ranked in the 1st percentile. As bad as 2018 has been, it is coming in slightly better in the 2nd percentile.

Blaming Billy Hamilton would be a natural reaction to this as his offense has been very poor since he came into the league, when he was almost immediately placed atop the Reds lineup. And despite his strong defensive play, it does not do enough to make the WAR percentiles much less abysmal. The addition of All-Star Adam Duvall (TM), whose slugging and defense gave the unit a nice boost, helped the 2016 campaign, but that proved to be short-lived as the past year and change have brought Adam back down to reality. Scott Schebler has shown glimpses of becoming a key contributor but has struggled with inconsistency, injury-related or not, and has been unable to breakthrough. Jesse Winker looked like the real deal for roughly the first 80 games of his big-league career, but has since stumbled onto his first rough patch, which led to this and subsequently this.

This brings us to the five-year rolling average, which has reached rock bottom in 2018. 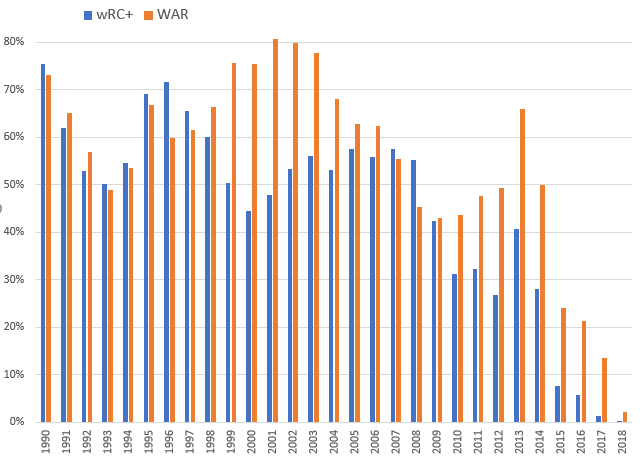 The current group is not entirely to blame for this. Jay BruceÃ¢â‚¬â„¢s two worst professional seasons were 2014 and 2015. Add in players like Skip Schumaker, Ryan Ludwick, and Marlon Byrd and these numbers make sense, as startling as they are.

But while exchanging veterans for youth, some marginal improvements and a flash-in-the-pan season have changed the perspective on the group as a whole, the reality is that the outfield has been historically bad recently and remains a major issue going forward.