The Reds chose University of Florida infielder Jonathan India with their first round selection, fifth overall in the 2018 MLB Amateur Draft. India sounds a lot like Nick Senzel. He also famously hit a home run in April against Auburn pitcher Casey Mize, who was tonight’s #1 pick overall. India and his Gator teammates are playing Florida Atlantic in an NCAA Regional in Gainesville tonight.

The Reds have two more picks tonight, their 2nd round pick, #47 overall and a Competitive Balance, Round B pick, #72 overall.

More analysis on the pick later, but here are a few online resources:

Press release from the Reds: 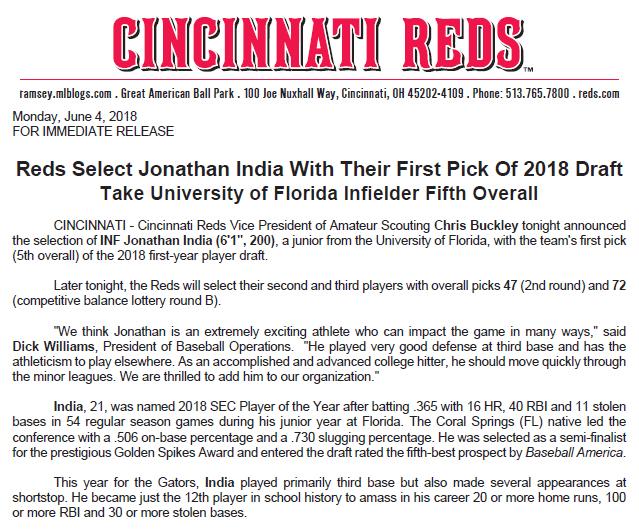 From Kiley McDaniel at FanGraphs:

“This spring, India has cleaned up his body, is a little more athletic, and now has 55 raw power to profile at third base, where he fits best long-term despite some time at shortstop this spring.

This improvement in body and strength has translated to his numbers, as India is raking this year to the tune of .433/.542/.911, with 20 walks, 19 strikeouts, and 11 homers. If he continues hitting at this rate deep into SEC play, he may force his way into the late first round, but heÃ¢â‚¬â„¢s currently a sandwich pick for me right now. A college bat with 50 hit and power tools, gaudy numbers, and some defensive value isnÃ¢â‚¬â„¢t easy to find. Such players tend to climb come draft day, so India is in good position.”

Reds want to take best player available, want guys who have a chance to advance to big leagues quickly, if possible. Looking for big arms, but if impact bats are available, they'll lean in that direction, because of how often big arms get injured.

Here's the thing about MLB Draft. You take the best players, regardless of position. With hitters, you worry less about position. If a guy can hit, you take them. Cubs did this with Schwarber and Happ, Red Sox with Benintendi. If you can hit, you can play.

5. Reds: Jonathan India, 3B, Florida. Can be a plus defender at 3B or 2B. Could also potentially play SS. Breakout season this year at the plate for a long-time well-scouted, well-regarded prospect. Back-to-back years Reds take a very polished productive SEC infielder.