Originally, this article was going to have nothing to do with the actual “Sleepless in Seattle” — besides the headline pun — but then I decided to refresh my memory on the movie’s plot and came across this one line summary: “A recently widowed man’s son calls a radio talk-show in an attempt to find his father a partner.”

We’ll stop with the movie gambit here, but the point stands: The Mariners could use a second baseman and the Reds have a second baseman to deal. So how could the two teams overcome the Mariners woeful farm system and send Scooter to Seattle without shorting the Reds’ end of the sale?

Before we dive into option one, let’s set our basic givens:

These five givens tell us: 1) Scooter’s worth has never been higher than it is currently; 2) prevailing wisdom says this is the best he will ever be; and 3) he will probably be too expensive for the Reds to re-sign. Three solid reasons to deal him now.

But the five givens could also be argued to say that: 1) Scooter has had enough sample size to prove this version is for real; 2) many second baseman only enter their prime at 28; and 3) re-signing him could be a bargain compared to other more renowned second baseman. Add in the possibility of Scooter playing outfield, and the givens are pointing toÃ‚Â hold, hold, hold.

If you buy into this second explanation — that Scooter is the second coming of Joe Morgan — all of the potential trades I’m about to suggest are going to seem…disappointing. If you buy into the first option, or even some middle ground between the two, the trades will still seem disappointing, but for the sake of this post, let’s stick with it.Ã‚Â Were the Reds to send Scooter to Seattle, logic dictates that they should be looking at a package of prospects similar to the Johnny Cueto haul.

Combing through the Seattle top 30, there are two tiers of players who should interest the Reds, of which they should ask for one from the first and two from the second.

Jumping out of your seat with joy yet? No? Fair enough, this first option is by far the most boring and uninspiring package for Gennett.

Mariners’ top prospect Kyle Lewis isn’t worth asking after due to his knee injuries, but No. 2 prospect Evan White definitely intrigues. White lacks pop, but has a plus hit tool and should be a bottom of the order asset in centerfield. An improvement in the box over Billy Hamilton at least. Julio Rodriguez is more of an upside prospect with a good frame for power and an easy, if long, swing. He could mature into 3-4-5 bat, or he could flame out spectacularly, who knows really.

As for the Tier 2 guys, none of them are really worth acknowledging. The pitchers have ceilings of No. 5 starters or eighth inning relievers. Liberato could hit well or could whiff his way out of baseball in three seasons. Of the four, Liberato has the highest upside but lowest floor.

Like I said before, taking this option would be a morale killer, and the Reds would be better off just holding Scooter than dealing for any three of these guys. But a deal of White, Elledge, and Liberato shouldn’t cause a mutiny. In fact, if Scooter does indeed become a pumpkin like many think he will, those three might be a steal.

2. Two Prospects and a Big Leaguer

Slightly more exciting, this option would at least net the Reds a recognizable name with some value for the next couple of seasons.

Take one Tier 1 guy from above (White would be my choice) and one Tier 2 guy (Elledge I would say), and then throw on Ben Gamel and you have yourself the makings of a deal.

A word of warning: This suggestion is by no means a ploy to trick the Reds into thinking Ben Gamel is an above average Major Leaguer. It’s more an acknowledgement that Gamel is only 26 years old and put up a similar, albeit better, slash line in his age-25 season compared to Gennett’s age-25 numbers.

Sub in Liberato for Elledge and the Reds’ return becomes three guys all with high upside and one who already has a Major League cup of tea.

To be entirely upfront, this option is the reason I wanted to write this post. The Reds can quibble over Evan White or Julio Rodriguez, Luis Liberato or Seth Elledge all they want, but none of those names will put any excitement into the fanbase.

But if the Mariners agree to trade whoever they draft at No. 14 as well? I’m dealing Scooter in a heartbeat.

That statement may seem absurd or premature at its face because no one knows who the Mariners will pick yet, so allow me to explain myself:

For reference, this is Trevor Larnach:

When he gets the call this @MLBDraft, where's he going to end up?#MLBDraft pic.twitter.com/VbCtQha6zl

If you aren’t convinced that he’s worth dealing Scooter for, watch this home run until you are.

In my opinion, Larnach is the most underrated prospect in this draft and that’s despite a top-15 projection. He has light tower power and plus defense, and should he hit at a reasonable clip, he’ll blaze through the minors. If the M’s are desperate to capitalize on their hot start, then dealing their first round pick makes sense.Ã‚Â Oh, and if they don’t select Larnach, the Mariners have also been linked to Travis Swaggerty, who isn’t a bad option either.

If I’m Dick Williams or Nick Krall, I’m on the phone Monday night, exploring any kind of deal involving Scooter and that No. 14 selection. Dealing the hometown boy may not make sense with any of the return options the Mariners currently have but give it four days and that one little plot hole may just resolve itself.

Because my fantasy team is now 1-7 and in absolutely abysmal shape, I’m going to largely stop updating you all on its progress and instead make a biweekly recommendation on a prospect to watch for dynasty leagues. This week, we have Zack Collins.

All of 23 years old, Zack Collins is the White Sox No. 9 prospect and probably the best catcher in the organization now that Wellington Castillo is suspended. Collins hits for a lot of power and even better, walks like Joey Votto. Unfortunately, he strikes out just as prevalently, but given his plus pitch recognition, he should be in the Majors sooner than later. The White Sox will probably keep him in the Minors until 2019, but he could be a nice September addition to any playoff fantasy teams.

And as for the biweekly update to the RLN views standings, I now sit precariously between Jason Linden and Matt Wilkes, settling like Jesse Winker onto the pine. 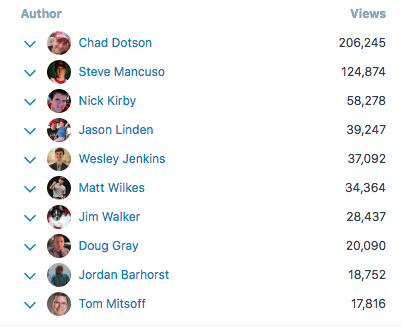