As most of you reading this article know, the 2018 Cincinnati Reds season is basically over. After the worst start to a season in franchise history, and without a roster built to dig out of such a deep hole, many fans are writing off the season as lost. But even in the midst of the darkest time this team has seen in the last decade or so, there have been a few bright spots worth mentioning. One of those bright spots has burnt brighter than ever as of late, and has gotten Redleg Nation in a tizzy. I speak, of course, of Ryan Ã¢â‚¬Å“ScooterÃ¢â‚¬Â Gennett.

We all know the story by now. Scrappy utility infielder claimed off the waiver wire turned Cincinnati folk lore legend after an out-of-nowhere massive power season, featuring one of only 18 instances in MLB history of a player hitting four home runs in a single game. In a city that lives for stories worth telling, Scooter Gennett became an overnight sensation.

But ScooterÃ¢â‚¬â„¢s 2017 season had fluke written all over it. Studies found that the baseball used was Ã¢â‚¬Å“juicedÃ¢â‚¬Â, aimed to increase the amount of power hitting in the game. Boy, did that ever work. Early reports in 2018 say the ball is no longer juiced, and naturally, weÃ¢â‚¬â„¢re seeing some of the big names who Ã¢â‚¬Å“broke outÃ¢â‚¬Â in 2017 turn back into pumpkins.

Currently, Gennett is leading the National League in Batting Average, and is top five in Slugging, wOBA, wRC+, and *shudders* RBI. HeÃ¢â‚¬â„¢s not only passing the stat test, but it seems like every time I tune in to watch the Reds, Scooter is hitting a ball, and hitting it hard.

What was meant to be a stopgap plan for second base in the Reds long-term plans has turned into something a little more complicated. Anyone who follows baseball knows the production is about to fall off; ScooterÃ¢â‚¬â„¢s .401 Batting Average on Balls In Play (BABIP) is ridiculously high, and therefore we can assume heÃ¢â‚¬â„¢s been pretty lucky so far. And for all of those top-of-the-leaderboard offensive statistics, Scooter still represents only an average major league regular when you factor in his awful defensive metrics. While Scooter may pass the eye test with the bat, he resoundingly fails the eye test with the glove. And, of course, the defensive stats back that up.

The internet has been waging this war for a few weeks now Ã¢â‚¬â€œÃ‚Â Do you sign Scooter Gennett to a long term deal, or do you try to flip him to a contender for a missing rebuild piece? IÃ¢â‚¬â„¢m not going to try to answer that question, mostly because any answer will be refuted by 50% of the fanbase. Instead, today weÃ¢â‚¬â„¢re going to envision a scenario in which Dick Williams and Nick Krall decide that Scooter Gennett is a must-have player for the future success of this team. What would a fair contract look like?

As we’ve done with all the other entries in this series, weÃ¢â‚¬â„¢re going to try to find a few comparable cases, and see what kind of money those players got. Of course, there hasnÃ¢â‚¬â„¢t really been a situation exactly like ScooterÃ¢â‚¬â„¢s, but weÃ¢â‚¬â„¢re going to try to get close. IÃ¢â‚¬â„¢m only looking at players older than 28 years old signing contracts extensions at least three years in length.

WeÃ¢â‚¬â„¢ll start with the player maybe least similar to Scooter Gennett, and thatÃ¢â‚¬â„¢s the defense-first shortstop of the San Francisco Giants, Brandon Crawford. In 2015, entering his age 29 season, Crawford agreed to sign a six-year, $75MM extension, locking him up for two arbitration seasons, and four free-agent years.

Crawford is known for his slick glove, but signed the extension after a 2015 season in which he had a 113 wRC+, which youÃ¢â‚¬â„¢ll take every single day at short. He was worth 4.3 fWAR during the 2015 season, mostly due to his defense. Since the signing, Crawford has been a solid contributor, putting up a career high 5.4 WAR in 2016 before seeing an offensive slide in 2016, which resulted in 2.1 WAR. He seems to be back on track in 2018, currently hitting to the tune of a 122 wRC+. Like most middle infielders, the defense has taken a hit after age 30, but Crawford is still above average defensively for the Giants.

LetÃ¢â‚¬â„¢s take a look at the contract details: 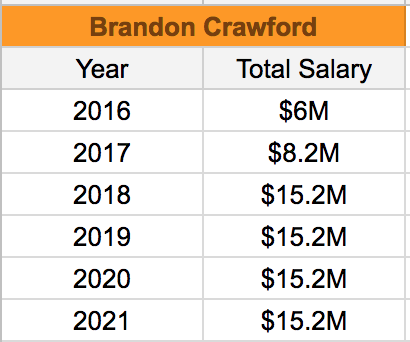 LetÃ¢â‚¬â„¢s call this the high end for Scooter. There would be quite a few Reds fans pretty irate if ScooterÃ¢â‚¬â„¢s extension were anywhere close to this. Both the money and the guaranteed years are pretty high. With the value Crawford brings with his glove, and the negative value Scooter brings with his, the Reds would need to hope GennettÃ¢â‚¬â„¢s May 2018 numbers become the new normal. Since only four players in MLB history have had a .401 BABIP over an entire season, I think itÃ¢â‚¬â„¢s safe to say that wonÃ¢â‚¬â„¢t be the case.

In the middle of the 2016 season, the Blue Jays and first-baseman Justin Smoak agreed to a two year, $4.125MM extension with an option for a third year at $6MM. The deal was signed during SmoakÃ¢â‚¬â„¢s last arbitration season.

LetÃ¢â‚¬â„¢s take a look at those contract numbers: 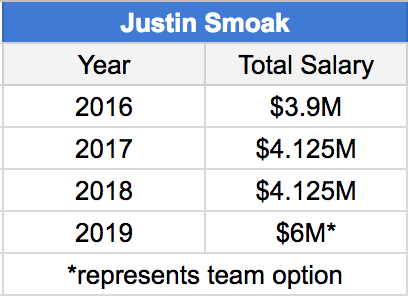 I think even the most hesitant of Reds fans could probably live with this extension. ItÃ¢â‚¬â„¢d be giving Scooter the security to finish out the rest of his prime years wearing Red, and giving the team a little bit of security with the back-end option in case things go south in a hurry. Of course all of these numbers will need to be increased, as Scooter is currently making just over $5MM in his second year of arbitration. But the structure is something I could get on board with.

At the end of the 2016 season, the Marlins signed third baseman Martin Prado to a three year, $40MM extension. Prado was 32 at the time of the signing, and was coming off a 3.7 WAR 2016 season. That followed a 3.4 WAR 2015 season. In fact, Prado had at that point just wrapped up his eighth season with a wRC+ over 100, meaning that heÃ¢â‚¬â„¢s been an above-average hitter for most of his career.

The mistake here is exactly the mistake the Reds donÃ¢â‚¬â„¢t want to make with Scooter Gennett. After the ink dried, PradoÃ¢â‚¬â„¢s body fell apart. He played in only 147 games in 2017, and had a Hamilton-esque 67 wRC+, ultimately finishing the season with -0.1 fWAR. Things arenÃ¢â‚¬â„¢t getting any better in 2018, as heÃ¢â‚¬â„¢s already Ã¢â‚¬Å“accruedÃ¢â‚¬Â -0.5 fWAR through 100 plate appearances. Now we need to keep in mind that Prado was 32 at the time of the extension, which is four years older than Scooter Gennett is right now. But let Prado be the cautionary tale of signing a player, especially aninfielder, into his 30Ã¢â‚¬â„¢s.

Despite Prado not living up to the contract he signed, the numbers are actually quite close to what IÃ¢â‚¬â„¢d expect a Scooter Gennett contract to look like. Here are the numbers: 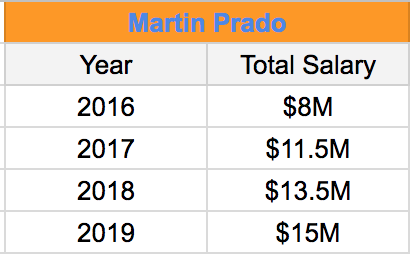 Again, none of these three scenarios exactly matches what the Reds have on their hands with Scooter. The money in the Prado deal seems about right, given GennettÃ¢â‚¬â„¢s current arbitration salary. You could argue that Gennett might want more years on his deal, but he hasnÃ¢â‚¬â„¢t come close to proving his value over as many full seasons as Prado was able to before signing his deal.

You knew it was coming, didn’t you? It’d be impossible to talk about an extension for a Reds second baseman without mentioning @DatDudeBP. In the early stages of the 2012 season, the Reds signed Brandon Phillips to a six-year, $72.5MM contract extension. Here are the details, in case you’ve blocked them from memory: 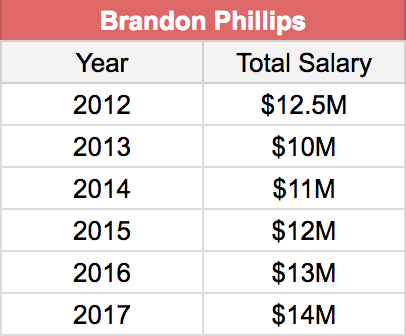 As we all know, the extension was the beginning of the end for Phillips in a Reds uniform. While he’d stay in Cincinnati through 2016 before being traded, those years were hardly Phillips’ best for the Reds. Brandon failed to hit above 100 wRC+ in any of those seasons, although he hovered close (his lowest in that span was 88 wRC+ in an injury-riddled 2014).

What really made this a bad deal was the fact that BP was 30 when he signed the contract. That makes the second example in this article alone of an infielder tripping over the 30 year old age line and declining rapidly. Baseball history has many, many more examples of this occurrence.

After looking through all of these scenarios and comparing to Scooter GennettÃ¢â‚¬â„¢s specific case, as well as the past few extensions the Reds have offered to players, hereÃ¢â‚¬â„¢s how I think a potential Gennett extension could shake out: 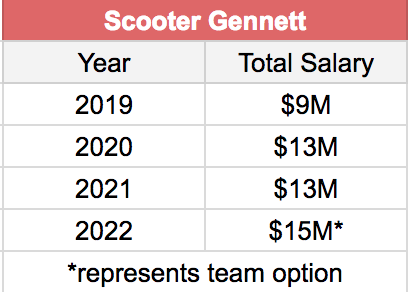 ThereÃ¢â‚¬â„¢s a little bit of everything here. Ultimately, the Reds tack on an extra team option to make the deal a year longer than PradoÃ¢â‚¬â„¢s. The money doesnÃ¢â‚¬â„¢t really come close to the Crawford extension, but is still significantly more than ScooterÃ¢â‚¬â„¢s fellow 2017 breakout companion Justin Smoak. The Reds have quite a bit of leverage here, mostly because Scooter’s track record isn’t all that lengthy. The past two years (should he keep it up) do warrant some serious dollars, though.Ã‚Â

ThereÃ¢â‚¬â„¢s no getting around the fact that, barring a disastrous second half, Scooter is going to get paid eventually. Whether the Reds should be the one paying him is obviously a different question. Reds fans have seen a post-prime, fan-favorite second baseman get extended in the not-so distant future. If signed, is Scooter Gennett doomed to the same fate as Dat other Dude? Sound off in the comments.