The Reds dropped their third consecutive game with a 5-2 loss in Arizona. The Reds have now lost 10 of their last 14 games. 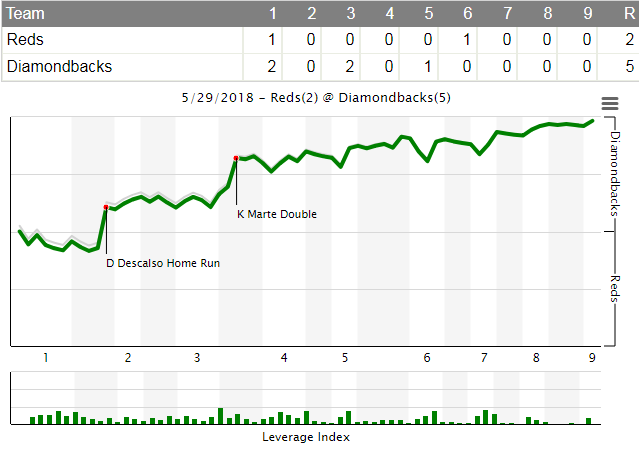 According to Fangraphs WPA statistic (winning percentage added), the most important play of the game was Luis Castillo allowing a 2-run home run to Daniel Descalso with 2 outs in the 1st inning, giving the Diamondbacks a 2-1 lead. That play decreased the Reds chances of winning by 17.9% (from 57.2% to 39.3%).

Eugenio Suarez hit his 10th home run of the season. Suarez now has a 155 wRC+ on the season.

Luis Castillo‘s recent run of solid stars was halted a bit tonight. He walked three batters tonight, the biggest being Jake Lamb right before he gave up a two out home run to Daniel Descalso. His final line certainly wasn’t awful, but the Reds are really wanting Castillo to take that ace role and run with it: 5.0 IP, 4 H, 1 HR, 4 ER, 3 BB, 6 K.

Scott Schebler and Adam Duvall both went 0 for 4. The four man outfield rotation has produced four below average hitters so far in 2018.