The Reds have stumbled into some tough decisions that need to be made regarding the future of the middle infield. Several names been both added and subtracted from the list of candidates over the past year or two, leading us to the current state of the roster that features Jose Peraza and Scooter Gennett. With Nick Senzel hopefully not too far off, Dilson Herrera finally playing at Louisville and Shed Long improving at Pensacola, that leaves Alex Blandino as somewhat of an unknown.

Blandino is the Reds 2014 first-round draft pick (#29) who has steadily climbed through the farm system, seeing extended time at AA Pensacola from 2015 -2017 before earning a mid-season promotion to AAA Louisville last season. He was moved to the 40-man roster last November and was called up to the big leagues in early April when Eugenio Suarez suffered his fractured thumb.

After a 1-17 slump to start his major league career, Blandino has started to perform more like he did in the minors, posting an .846 OPS since April 20th. He has also played all three infield positions not manned by Joey Votto, with the majority of his time coming at second and third base. While he still has much to prove to show he can be a consistent contributor, it is not hard to imagine Blandino filling the role of a utility player. How impactful he could be, again, is still up for debate.

It is tough to get a good read on him so far considering he has played somewhat sparingly and also got off to a really poor start to the season. A good place to begin might be a tweet from Redleg NationÃ¢â‚¬â„¢s own Nick Carrington.

These numbers are basically the same from last week and do indicate that Blandino has exercised good patience at the plate and has made more contact than average when he does swing.

This could be a product of the contact that he has been making, which is a bit below average. Hard hit and soft hit percentages are basically average, but his GB/FB ratio is a little high. His xWOBA is right around average while his xSLG is below average at .358. His current ISO is below his worst season in the minor leagues (2016 at AA) and well below is 2017 campaign at AAA where he posted a .173.

The hit tool looks good and there is potential for more power, we just have not seen all come together at the major league level. And considering he does not even have 100 plate appearances yet, it may take awhile for that to happen.

Based on rankings from Doug Gray at redsminorleagues.com, BlandinoÃ¢â‚¬â„¢s prospect ranking peaked after his 2015 season as the organizationÃ¢â‚¬â„¢s #9 prospect. He sat at #17 after his 2017 season where he posted an .835 OPS in his time at AA and AAA. So while he has some strong pedigree as a top-pick and has been a top 10 Reds prospect in the past, he has never received the Ã¢â‚¬Å“franchise-playerÃ¢â‚¬Â expectations of that have been placed on recent draft picks Nick Senzel and Hunter Greene.

For a deeper dive into what we could potentially expect from Blandino, I looked to his KATOH projections. FanGraphÃ¢â‚¬â„¢s Chris Mitchell developed this projection system which is aimed at developing long-term production forecasts for minor league players. Without getting too far into the weeds, one of the outputs for the system is likelihoods for certain ranges of career WAR. Below is BlandinoÃ¢â‚¬â„¢s projections as of January 2018. 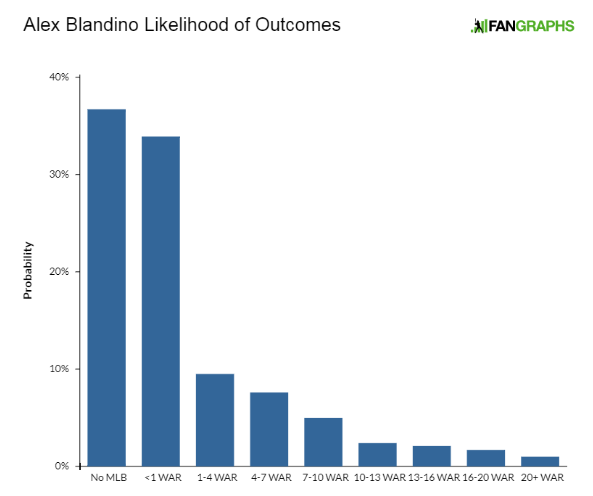 While this admittedly does not look super optimistic at first glance, every single prospect is going up against the odds to become an everyday contributor for a major league club. For reference, comparing Blandino to a similar, higher ranked Reds prospect like Shed Long shows us that Blandino might not be someone to sleep on. 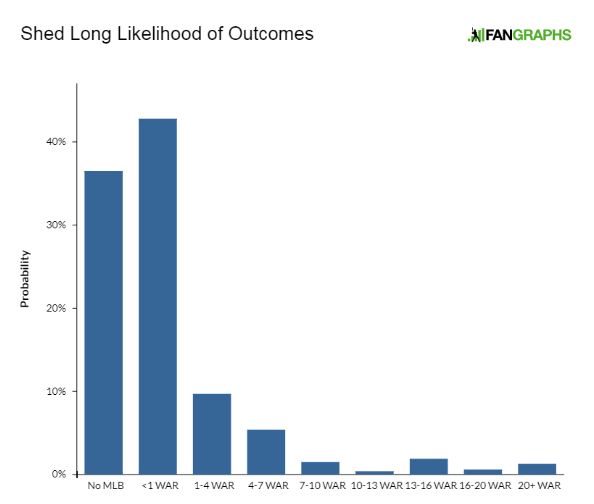 Considering that Blandino has already jumped his first hurdle and made it to the Reds, we can start to see a high floor, low ceiling player who would fit perfectly as a utility infielder. Positional versatility is very trendy across the league right now and despite Blandino grading out as a below average defender, there is value in being able to play multiple spots, especially if he can find the offensive production he had for most of his minor league career.

Some of the more successful seasons the Reds have had with infield utility players came from the likes of Juan Castro (1.7 bWAR in 2003), Rich Aurilia (3.0 bWAR in 2005-2006), Paul Janish (1.1 bWAR in 2010) and Kris Negron (2.1 bWAR in 2014). There have also been some poor seasons, with both Castro and Negron, as well as players like Ivan De Jesus and Wilson Valdez. Overall it is a mixed bag of players that have filled the role, though most of them were older veterans on the tail end of careers. One exception was Juan Castro who joined the Reds as a 28-year old and had six plus seasons as a true utility man, but actually amassed -2.6 WAR over that span (2000-2007).

The point of all this is to say that Blandino presents an opportunity for the Reds that they have not been able to take advantage of in the past. It only takes a little squinting at the graph above to see that Blandino has a roughly 20% chance of producing 4+ fWAR for his career. That might not sound like much, but it does sound better than Juan CastroÃ¢â‚¬â„¢s -6.1 career fWAR. It is also not hard to look around the league and see dozens of players who are not one of their teamÃ¢â‚¬â„¢s top options, but play a key role in their success. Marwin Gonzalez, Brock Holt, Chris Taylor, Ian Happ and many others have all been key contributors on teams that have seen significant success recently. There is obviously more to winning a World Series than having a good utility player, but it certainly can be an X-factor when every little detail matters in October.

Blandino may or may not be as good as any of those players; there is still much to be seen about that. But given the other infielders on the 40-man roster this could be a best-case scenario for everyone involved. If the Reds are going to manage to build a contender in the near future, Blandino could end up being an important part of it, even if he is not the most important part.