The Reds have made a habit of picking pitchers up off the scrap heap and later flipping them for promising young players who have shaped today’s roster. In 2014, they turned Alfredo Simon, a former waiver-wire addition, into eventual third baseman of the future Eugenio Suarez. In 2017, they dealt another waiver claim, Dan Straily, for Luis Castillo and Austin Brice.

They’re hoping former Mets ace Matt Harvey, acquired in exchange for Devin Mesoraco one week ago, will be the latest pitcher whose value they can rebuild. Harvey has the name recognition and track record of success that even a few steps in the right direction might send teams calling in July. Pitching coach Danny Darwin will have his work cut out for him if that’s going to happen, however.

In reality, Harvey is nothing more than a reclamation project at this point in his career. Although he’s only 29 years old and was once among the most dominant pitchers in the game, the last two-and-a-half seasons have not been kind to the right-hander. Injuries, off-field debauchery, clubhouse question marks, and — the most important thing at the end of the day — poor performance have riddled Harvey since 2016.

While there’s no reason to believe Harvey will ever return to his former prominence, the Reds are hoping to turn him into July trade bait at the very least. His first start with the club, while brief, was solid. In Los Angeles on Friday, he threw four nearly perfect innings, with the only hit being a flyball that was lost by Scott Schebler in the bright lights of Dodger Stadium. If nothing else, the outing provided a little glimmer of hope for Harvey’s future in Red. But is it warranted?

A 2010 first-round draft pick out of North Carolina, Harvey quickly became a star. By 2012, he was in the majors. By 2013, he became the youngest pitcher to start an All-Star Game since Dwight Gooden in 1988 and finished fourth in NL Cy Young voting (and he likely would’ve won the award if he’d pitched a full season). Even Tommy John surgery didn’t slow him down, as he posted a 4.4 fWAR when he returned in 2015. Through his first three-and-a-half seasons, Harvey held a 2.53 ERA, 26.6 K%, and 5.6 BB% — numbers that held up with the best of the best.

Harvey’s calling card was velocity. He topped 100 on the radar gun on several occasions and averaged 96 mph on the heater in 2013 and 2015. The year in between was when he had Tommy John surgery and didn’t pitch at all, so the fact that he came back and was just as effective shows you how far the procedure has come. But not all recoveries from surgeries are so smooth. In 2016, at age 27, Harvey’s reign as a dominant pitcher came to a sudden and screeching halt.

The troubling signs came early in the season, as his heater suddenly had a little less sizzle. There was hope he could pitch through it, as his fastball velocity had dipped a bit toward the end of the 2015 season and he still threw effectively. Despite continuing to sit in the mid-90s, however, Harvey’s effectiveness disappeared. He posted a 4.86 ERA in 17 starts and saw his strikeout rate plummet from 24.9% to 18.9% in 92 2/3 innings before being shut down for the year with right shoulder problems. Harvey later had surgery for thoracic outlet syndrome, a nerve condition that is much harder for pitchers to return from than a torn UCL.

Former Astros pitcher J.R. Richard is the most famous example of the severity of thoracic outlet syndrome. After pitching with the condition for an extended time, his arm eventually went “dead.” He would later have a major stroke brought on by the condition and never pitched again, his career over at age 30. Even with the medical developments over the last three decades since Richard’s playing days ended, recovery is no sure bet.

Josh Beckett, Chris Carpenter, and Shaun Marcum are just three pitchers who’ve seen their careers derailed by the problem in recent years. But they were all in their mid-to-late 30s at the time they had the surgery, so Harvey’s youth perhaps gave more reason for optimism. Pitchers like Tyson Ross, who had the procedure at 29, and Jaime Garcia (27) bounced back and have been productive pitchers again. Matt Harrison also had the operation at age 23 and returned to effectiveness in 2011 and ’12.

So far, though, Harvey has looked nothing like his former self on the mound. Last year, he missed more time with a stress fracture in his scapula and posted a 6.70 ERA, 6.37 FIP, and 5.39 xFIP in 92 2/3 innings. His fastball velocity dropped further, averaging 93.8 mph and touching 96 only on occasion. Per FanGraphs, Harvey maintained a career-worst minus-15.6 pitch value on his fastball. Of 149 pitchers to throw at least 90 innings, only 11 had a worse fastball than that.

Those numbers are even worse in 2018. 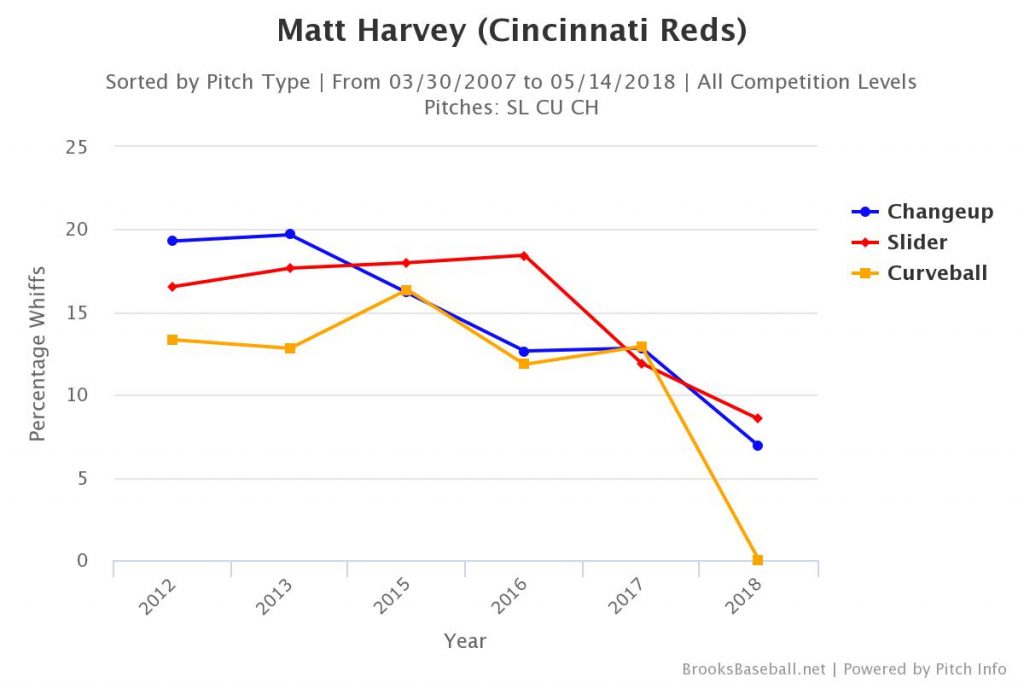 After Harvey’s fastball showed signs of returning to its former glory in spring training, its velocity has dropped another full mile per hour, sitting at 92.8 mph. All four of his former plus pitches are unrecognizable compared to Harvey’s peak. Not only is he failing to generate whiffs, but he’s also not getting batters to chase, an indicator that his pitches aren’t fooling the opposition at all. The league average O-Swing% (percentage of pitches swung at outside the strike zone) for pitchers is 29.8%. Harvey has a worse rate than that on all of his offerings. He’s also largely scrapped the curveball this year, throwing it only 17 times despite it being his best swing-and-miss offering in 2017.

As a result, he’s been hit even harder in 2018. His average exit velocity allowed is 89.3 mph, which is far from the worst in baseball but is also the lowest mark for Harvey in the Statcast era (since 2015). That problem is exacerbated by his lowest groundball rate (39.6%) since his rookie year in 2012, as Harvey has allowed six dingers in 31 innings after allowing 21 in 92 frames last year. In Great American Ball Park, luck probably won’t be on his side as much as it was in Dodger Stadium on Friday.

Clearly, the overall picture is not an appealing one. The deeper you dive into some of the numbers, the worse it gets. But there are at least some encouraging signs — even if it might take some squinting to see.

Searching for a Silver Lining

Obi-Wan Kenobi isn’t walking through that door, but all hope is not lost for Harvey. Some pitchers have needed over a year to fully recover from thoracic outlet syndrome and regain any semblance of their former self. The aforementioned Tyson Ross is a perfect example of this. The former San Diego Padres all-star had the procedure following the 2016 season. Ross returned to a big-league mound with the Texas Rangers last June and posted numbers worse than Harvey’s over the last two-and-a-half years.

His big-league career seemingly on life support, Ross re-signed with the Padres on a minor-league deal during the past offseason and made their rotation out of spring training. Ross has proceeded to be their best starter again, just as he was in 2014 and ’15. Although Ross’ velocity hasn’t returned to his pre-surgery levels, his feel for his wicked slider has, fueling a 26.7 K% one year after posting a dismal 15.1 K%. By no means does that indicate Harvey is due for such a rebound, but Ross has shown it’s possible to flourish again after a debilitating surgery.

Similar to Ross, Harvey’s slider has shown signs of improvement in 2018. The results aren’t there in terms of missing bats, but hitters are having far less success against it than they did a year ago, slugging just .179 versus .418 in 2017. That’s largely because the pitch is still generating a high groundball rate at 55.0% and a drop in average exit velocity from 86.0 mph to 85.2 mph.

Better control is fueling Harvey’s success with the pitch. Unlike last year, he’s not missing up in the zone as much (four of his 21 homers allowed came on the slider, second most of any pitch behind the fastball), and he’s not missing so far off the plate that it’s an easy take for hitters. Here’s a look at the slider location in 2017 (left) vs. 2018 so far (right):

Harvey’s control in general is also better. His walk rate has fallen from a terrible 10.9% to a much more manageable number at 6.6%, and he’s throwing his fastball in the zone 58.3% of the time compared to 55.7% last season. That’s not all good, as the pitch is getting blasted by 5 mph more. While the control is better, Harvey still has work to do on his command and keeping the ball out of the middle of the plate.

Fortunately, his fastball velocity has increased over his last two outings, which may help him get by with some of the mistake pitches if (and that’s a big if) that trend continues. In his first game with the Reds, he averaged a season-best 94.6 mph and hit a maximum of 96.9, his fastest pitch since June 2, 2017.

There’s obviously a lot more bad than good with Harvey over the last two years; the Mets wouldn’t have given up on their former ace otherwise. But if the Reds aren’t going to give Amir Garrett a shot in the starting rotation — which seems like a fading possibility with each passing day — there’s not much harm in seeing if Harvey can build himself back into a decent trade chip by the time July rolls around, or at least until Anthony DeSclafani returns.