Two Reds players offer an excellent lesson for how variance in defense and luck can dramatically skew batting statistics. Scooter Gennett is having a terrific season. In fact, he was named the NL Player of the Week today for last week’s performance. On the other hand, Adam Duvall is struggling at the plate.

But wow, that batting average. Gennett is really hitting and Duvall isn’t, right?

Batters do have a little control over how hard they hit a ball and what kind of ball — ground ball, fly ball, line drive — they hit. But once it leaves the bat with a certain trajectory and exit velocity, batters have little to zero control over whether the ball lands for a hit or is caught relative to similarly hit balls.

Hitters can be victims of great defensive plays or beneficiaries of short-range or weak-armed defenders. They also have varying degrees of luck. The idea that batters take great aim at where they hit the ball is a myth. Even major league hitters don’t have the skill to accurately target ground balls between the third baseman and shortstop. Some happen to go to defenders and some go between. Same goes for hard-hit balls to the outfield. Sometimes it’s Billy Hamilton out there, sometimes its not.

Take ground balls for example. In 2018, Scooter Gennett has hit more ground balls than Adam Duvall overall and more grounders into the shift. Duvall has hit his ground balls harder, giving defenders less time to react. Given average defense and luck, you’d expect Duvall to have a higher batting average on ground balls this season. But you’d be wrong.

Scooter Gennett has a .292 batting average on ground balls while Adam Duvall’s is just .129. Again, it’s not because Duvall hits into the shift more. Or that Gennett hits it harder. It isn’t running speed either, as Duvall has a slight edge there. No, those factors out of hitters control have broken in Gennett’s direction and that accounts for the huge difference in batting average.

Same for fly balls. This season, Adam Duvall has hit fly balls with a higher exit velocity than Scooter Gennett. His fly balls have gone further. But Gennett’s batting average on fly balls is considerably higher than Adam Duvall’s.

Duvall has hit line drives harder than Gennett this year, but Scooter’s batting average is significantly higher. Duvall has been really unlucky.

Statcast classifies certain hit balls as “solid contact” and those become hits at an average rate of .406. Gennett’s solid contact balls have fallen in for a .444 average, while Duvall’s outcome is well below average. Again, keep in mind these are similarly hit balls.

Statcast also has a category of hit balls deemed “flare/burner” where the batter trades off speed for loft and vice versa where balls land in between fielders. League average on those kind of balls is .662. But Gennett’s average is more than 100 points higher than league average and Duvall’s is, astonishingly, nearly 300 points below.

When you put everything together and look at how each of those two batters has struck the baseball this year, it turns out that Duvall has actually hit balls better than Gennett. The statistic xwOBA is based on looking at every actual hit and figuring out what the average run production of that hit is, across the league. (Here’s a primer on the stat from last season.)

Adam Duvall has a higher xwOBA than Scooter Gennett. That’s in contrast to what their respective hit balls have actually produced without holding defense and luck constant. Gennett’s wOBA (actual, not expected) is .377 and Duvall’s is .269.

338 major leaguers have had at least 50 plate appearances.Ã‚Â Here’s a chart showing where all the Reds stand in xwOBA (how they have hit the ball) relative to those 338 players. 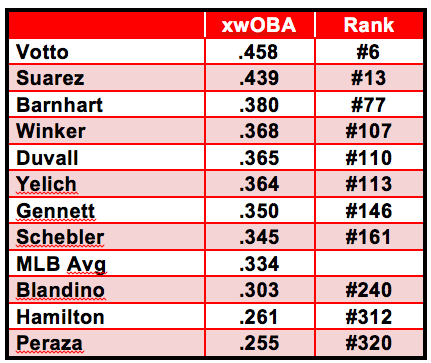 Joey Votto is top ten. That’s remarkable considering his horrible start to the season. Eugenio Suarez is right behind and that’s no surprise. He’s the #13 hitter in baseball. Then there’s a big gap to Tucker Barnhart. His number is higher than you might expect because this statistic does credit hitters for walks. Then there’s Jesse Winker, well above league average AND above Redleg Nation platonic love interest Christian Yelich. At the bottom are Billy Hamilton and Jose Peraza. Yes, Jim Riggleman is batting one of the least productive hitters in baseball #1 or #2 every day.

One last stat – average distance that home run balls travel. Gennett’s home runs stand out as being really short. In fact his average distance ranks in the bottom 3 percent of major league batters with at least 25 batted balls. So yes, he’s hit 6 home runs, but maybe he’s been a bit lucky about where they’ve gone. 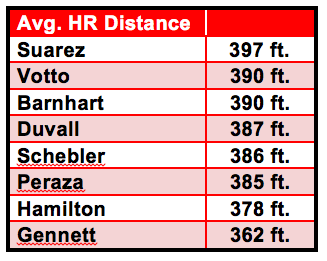 Scooter Gennett’s hits for the Reds this year have been real. And they are as welcome as can be. Likewise, Duvall’s lack of production has hurt the Reds. Those are actual results based on where the balls landed and how they were fielded. They describe what happened with 100 percent accuracy. Gennett has hit .329 and Duvall .179.

But unless you account for how their balls were hit, you won’t have the complete picture. Including the positive production from walks, Adam Duvall has hit the ball better than Scooter Gennett. The latter has been quite lucky and the former quite the opposite. That information is about the future.Ã‚Â Those numbers — the real data about how the balls were hit — argue for caution both in overestimating Gennett’s future contribution and underestimating what Adam Duvall might provide.