The Cincinnati Reds have now won five consecutive games. The Reds fell behind early tonight, but Scott Schebler delivered a huge three run home run against his former team to turn a 3-1 deficit into a 4-3 lead. Every Reds starting position player collected a hit tonight.

Homer Bailey wasn’t great, but he battled through five innings. The Reds bullpen slammed the door again, even without Igelsias available tonight. The Reds have their first five game win streak since May 3-7, 2017. 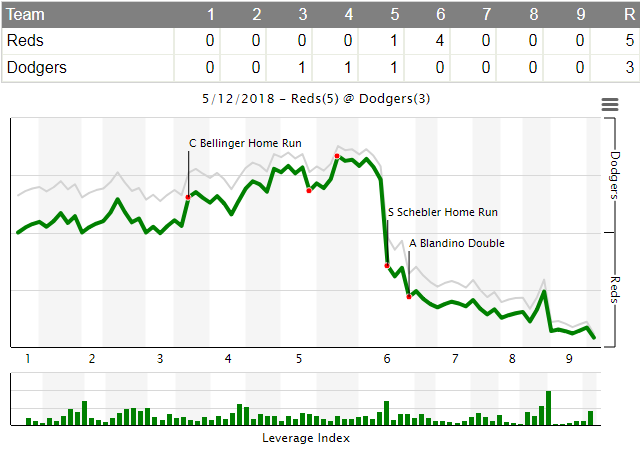 According to FangraphsÃ‚Â WPA statisticÃ‚Â (winning percentage added), the most important play of the game wasÃ‚Â Scott Schebler’s 3-run home run with 1 out in the 6th inning off J.T. Chargois, giving the Reds a 4-3 lead.Ã‚Â That play increased the Reds chances of winning by 37.7% (from 26.9% to 64.5%).

Scooter GennettÃ‚Â just keeps raking. Gennett had 3 hits tonight, and now has 13 hits over the last 5 games. He is now hittingÃ‚Â .329/.368/.521 on the season. We will soon be talking about Scooter’s all-star campaign.

Since joining the Reds in 2017, Scooter Gennett ranks 16th best vs RHP in wRC+ (140) IN THE ENTIRE MLB. He is ahead of guys like Giancarlo Stanton, Paul Goldschmidt, Anthony Rizzo, Cody Bellinger, Manny Machado, Carlos Correa, Anthony Rendon, Jose Abreu, and Edwin Encarnacion.

David HernandezÃ‚Â pitched a brilliant 2.1 shutout innings in relief, and the Reds needed it with a thin bullpen. Hernandez only allowed 1 hit, didn’t allow a walk, and had 3 strikeouts.

Jared HughesÃ‚Â pitched a perfect 9th inning, earning his first save of the season.

Jose PerazaÃ‚Â had a really nice play on a slow roller hit to him in the 9th. If he hadn’t made that play, Cody Bellinger would have hit representing the tying run.

There is nothing to see here. THE REDS HAVE WON 5 STRAIGHT GAMES, GUYS. 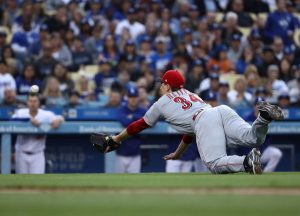 It was another mediocre start forÃ‚Â Homer Bailey.Ã‚Â He certainly battled through the start, and in the end only allowed 3 runs. However, Bailey allowed 10 hits and 2 walks in just 5.0 innings. Bailey also allowed his MLB worst 12th home run of the season.

Scott Schebler‘s post game comments were interesting. Jim Day asked Schebler if the manager change had anything to do with the teams recent success. Schebler said something about Jim Riggleman demanding that they run out ground balls, always hustle, etc. That certainly doesn’t mean thatÃ‚Â Bryan PriceÃ‚Â didn’t demand hustle, but it has certainly been a focal point for Riggleman. 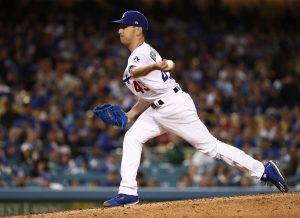 The ambidextrousÃ‚Â Pat Venditte got 4 outs tonight for the Dodgers. That was fun to see.

Yes, I had the title of this recap up by the 7th inning. I believed.

@Nicholaspkirby you're tempting fate with the title of your draft recap