On March 26th, just days before the 2018 season would officially start, the Philadelphia Phillies signed prospect Scott Kingery to a six-year, $24 million dollar contract. The signing stuck out for obvious reasons Ã¢â‚¬â€œÃ‚Â Kingery would become just the second drafted player in history to sign a multiyear contract before debuting in the big leagues. Kingery is struggling so far in his rookie season, but looks to be a productive player once he gets adjusted to the big leagues.

On April 18, 2008, the Tampa Bay Rays signed Evan Longoria to a six-year, $17.5 million dollar guaranteed contract, after just six big league games. The contract included a few team options which could have maxed out at nine years and $44M, but a contract extension was signed that locked Longoria up (seemingly) for life. Longoria had a fantastic career in Tampa, building his case for the Hall of Fame on one of, if not the most team-friendly deals in MLB history.

But why? ItÃ¢â‚¬â„¢s clear that Evan Longoria deserved to be paid much more than he actually was during his time with the Rays. Why auction off a Hall of Fame future after only playing six games in the majors?

Remember when I said Scott Kingery was the second drafted player to sign a multiyear contract before stepping foot on a big league field? The first player to accomplish this feat was Jon Singleton of the Houston Astros. At the time, locking up Singleton for five years at $10 millionÃ‚Â seemed like a good deal. Singleton was the teamÃ¢â‚¬â„¢s third ranked prospect, behind only Carlos Correa and Mark Appel. He was a consensus top-100 prospect, much like Kingery himself.

But, being a star in the MLB wasnÃ¢â‚¬â„¢t in the cards for Singleton. Despite the pedigree, Singleton bombed miserably at the major league level, not even sniffing the Mendoza Line, and striking out almost 40% of the time over 430 plate appearances between 2014 and 2015. He hasnÃ¢â‚¬â„¢t appeared in the big leagues since.

Another Tampa Bay Ray, Matt Moore, signed a five-year, $14 million extension in 2011 after just 19 innings pitched for the Florida club. Perhaps hoping to strike gold twice, MooreÃ¢â‚¬â„¢s tenure with Tampa was marred by injuries, although it was still fairly successful. Moore was eventually traded to San Francisco at the deadline in 2016.

So what does all of this say? Signing players early poses both risk and reward for clubs and players alike. Teams are taking a chance on young players who havenÃ¢â‚¬â„¢t Ã¢â‚¬Å“proven itÃ¢â‚¬Â at the big league level, and are definitely at risk of the plan not working out. However, there are plenty of examples of players signing these contracts and exploding onto the scene, and suddenly becoming one of the best assets in baseball due to their contracts and ability. Names like Chris Archer and Christian Yelich were dropped in almost every tweet last off-season, mostly due to their team-friendly contracts and young age.

For the players, the risk is a little more substantial. If a player is good enough to be considered for a contract extension at such an early stage in their career, the chances are theyÃ¢â‚¬â„¢ll likely be worth it, and then some. It was certainly the case for Longoria. However, as we all know, entire careers can be shipwrecked by one injury. Signing a contract this early is a great insurance policy, and is a huge step up from the pathetic wages minor league players are being paid today.

Okay, time to put this in context. At this point in the rebuild, there are a ton of young players on the Reds roster. WeÃ¢â‚¬â„¢ve seen a lot of good things from these guys, but weÃ¢â‚¬â„¢ve also seen some growing pains. Are any of the young Reds players worthy of an extension like this? And if so, what would it cost the Reds?

As far as hitters go, this decision really came down to Nick Senzel vs Jesse Winker. With SenzelÃ¢â‚¬â„¢s recent illness potentially being related to his 2017 season ending vertigo, thereÃ¢â‚¬â„¢s a new uncertainty that we need to factor into his prospect status. IÃ¢â‚¬â„¢m not saying itÃ¢â‚¬â„¢s going to detract from his greatness, but if it keeps cropping up every once in a while, itÃ¢â‚¬â„¢ll be a factor.

Another reason I didnÃ¢â‚¬â„¢t opt to include Senzel in this hypothesis is the unpredictability of his agent, Scott Boras. WeÃ¢â‚¬â„¢re likely a few years away from an ugly divorce between team and player, if BorasÃ¢â‚¬â„¢ history tells us anything about teams being able to extend his clients.

ThereÃ¢â‚¬â„¢s also the fact that he hasnÃ¢â‚¬â„¢t made his major league debut yet, and even though all signs point to him making that leap with flying colors, weÃ¢â‚¬â„¢re going to deal with someone a little more established in this scenario.

So far in 2018, Jesse Winker has been a revelation at the top of the Cincinnati lineup (when heÃ¢â‚¬â„¢s actually in the lineup, that is.) The 24 year old is batting .287/.404/.362 over 114 plate appearances, and is currently second on the team in both walks and doubles. The power hasnÃ¢â‚¬â„¢t shown up just yet, but as a leadoff hitter, Winker has been exactly what the Reds have been missing at the top of the lineup for years. If the power does come around even a little bit, Winker becomes a cornerstone of the Reds offense for years to come.

So whatÃ¢â‚¬â„¢s he worth? LetÃ¢â‚¬â„¢s take a look at both the Kingery and Longoria deals. Keep in mind that these two deals were almost exactly a decade apart, so the numbers wonÃ¢â‚¬â„¢t line up exactly. But, both contracts include three option years, which is an important factor. 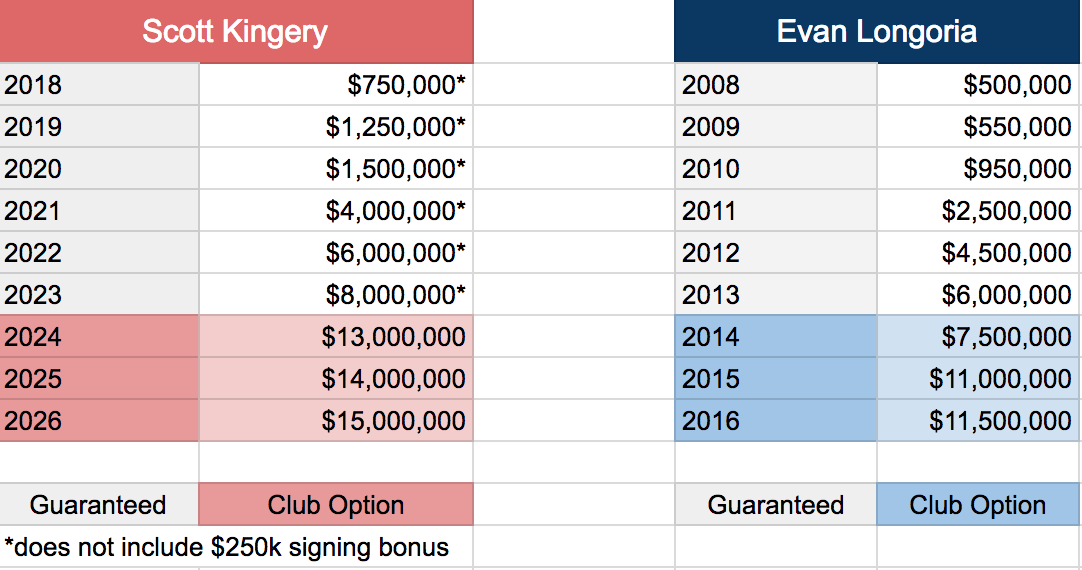 Right away, we can see what economics has done to baseball over the last decade. Players are getting paid, which is a good thing. You can see the ramps in salary are steeper and happen earlier in the Kingery contract, despite him not having nearly the prospect clout that Longoria did at the time of his signing. ItÃ¢â‚¬â„¢s the Kingery contract weÃ¢â‚¬â„¢ll need to model any Winker signing after.

Winker isnÃ¢â‚¬â„¢t quite the prospect that Kingery is at the national level. Although most Reds fans would have Winker higher on top 100 lists than most analysts ended up placing him, he just doesnÃ¢â‚¬â„¢t have the top 50 prospect status that Kingery has. However, Winker obviously has more experience than Kingery did at the time of his signing. Although 256 plate appearances is hardly a large sample size, Winker is already well on his way to establishing himself as a major league regular.

What Winker has done in those 256 plate appearances though, leaves a little to be desired. HeÃ¢â‚¬â„¢s been great, donÃ¢â‚¬â„¢t get me wrong, but the Phillies paid Kingery Ã¢â‚¬Ëœfuture starÃ¢â‚¬â„¢ money. WinkerÃ¢â‚¬â„¢s lack of power in 2018 likely rids him of a Ã¢â‚¬Ëœfuture starÃ¢â‚¬â„¢ label, and saddles him instead with an Ã¢â‚¬Ëœeveryday playerÃ¢â‚¬â„¢ label. Still fantastic for a 24 year old, but itÃ¢â‚¬â„¢ll need to be considered when talking money. 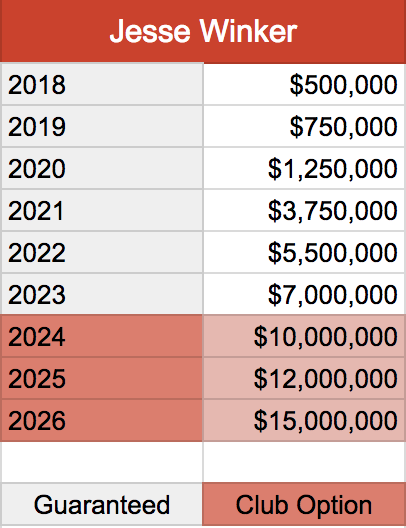 The six-year guaranteed, nine-year including club options is a good base that the Reds shouldnÃ¢â‚¬â„¢t be too cute with. ItÃ¢â‚¬â„¢s a solid contract that provides the player with longevity, and allows the team to capitalize on the investment by locking the player up until his age 33 season. ItÃ¢â‚¬â„¢s a good trade-off that gives everyone what they want in this situation.

The money is slightly less than what Kingery is getting, but is still a very respectable major league salary. When compared to the recent Eugenio Suarez contract, itÃ¢â‚¬â„¢s somewhat comparable. Suarez is being paid more than this projection from ages 26-29, but Winker would be making more money in his age 30-33 seasons. This would give the Reds two manageable contracts for two cornerstone players near the end of VottoÃ¢â‚¬â„¢s contract, when players like Taylor Trammell, Tyler Stephenson, and Hunter Greene should be around.

At the end of the day, signing players to contracts at a young age can be much more sensible than the current system of signing free agents to big-dollar contracts when they hit their thirties. It makes more sense that youÃ¢â‚¬â„¢d want to be paying your players the most money during their most productive years Ã¢â‚¬â€œÃ‚Â literally paying for their production Ã¢â‚¬â€œÃ‚Â than it does paying players a premium for work theyÃ¢â‚¬â„¢ve done in the past. Contracts like these could become the new normal after an off-season like 2017, when front offices seemed finally to get wise to the fact that paying old players top dollar might not be a good idea.

So, what do you think? Would you be comfortable with this contract? Why or why not? What other young players do you think deserve an early-20Ã¢â‚¬â„¢s extension?