Adam Duvall came off the bench and drove a 2-1 fastball into the left field bleachers for a game-winning homer leading off the bottom of the 10th. It was the second win in a row for the Redlegs and their 10th of the season. The victory also gave them a series win over the New York Mets. Lordy, I hope there are tapes.Ã‚Â

Sal Romano’s eighth start of the season was his best. Through six he gave up just one run on four hits. Romano struck out seven Mets while walking just one, on 96 pitches. Romano’s ERA is 3.86, but warning signs are present in his 5.37 FIP and 5.05 xFIP. Today was a solid step in the right direction.Ã‚Â

The bullpen picked up where Romano left off. Jared Hughes (clean 7th), Amir Garrett (1 walk in the 8th) and Raisel Iglesias (clean 9th and 10th). Something to watch going forward: Raisel Iglesias clearly winced and grabbed the forearm of his non-throwing arm twice facing the last batter of the 9th inning. He did return to pitch the 10th. Please, no injuries to Raisel.Ã‚Â

Heading into the 6th, the Reds had managed just two soft hits, ground ball singles by Eugenio Suarez and Alex Blandino. Trailing 1-0, Jesse Winker led off the bottom of the 6th with a walk. Jose Peraza followed with a perfect bunt down the third base line, his league-leading sixth bunt for a hit. The contrast in bunting skill between Peraza and Billy Hamilton is profound. Peraza knows what he’s doing. Joey Votto drove in Jesse Winker on a sharp liner to his pal Jay Bruce in right field.Ã‚Â

Alex Blandino is proving to be a capable utility player. He’s solid or better with the glove. He can play all the positions across the infield. And he’s not an automatic out. Blandino and Peraza combined on a nifty double play last night.Ã‚Â

Joey Votto made a nice defensive play, diving toward the first base line on a hard-hit ground ball, robbing Asdrubal Cabrera of an extra-base hit. Peraza himself made a couple nice plays at short, provoking Reds TV announcer Thom Brennaman into another one of those not-knowing-what-he’s-talking-about superlatives.Ã‚Â

Update: Sam Greene, the terrific photographer at the Cincinnati Enquirer caught this image of Raisel Iglesias grabbing his arm as described above. Manager Jim Riggleman said after the game that Iglesias felt a twinge catching a ball in the 9th, but went down to the warm-up room and “worked it out.” Iglesias did pitch the 10th, but this bears watching.Ã‚Â 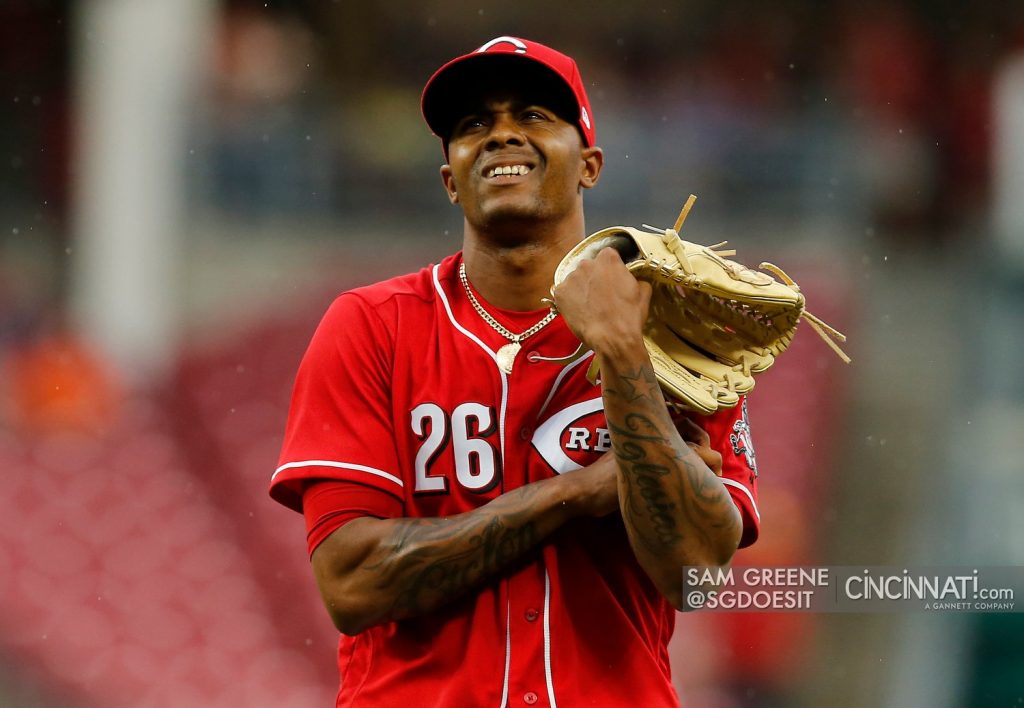