Coming off last yearÃ¢â‚¬â„¢s strong performance at the plate, we all knew Eugenio Suarez was the real deal. The Reds knew it and signed him to a 7-year contract extension prior to the season. He definitely knew it and must have thought, hey, if I am going to be good at hitting baseballs, I might as well look good doing it too. 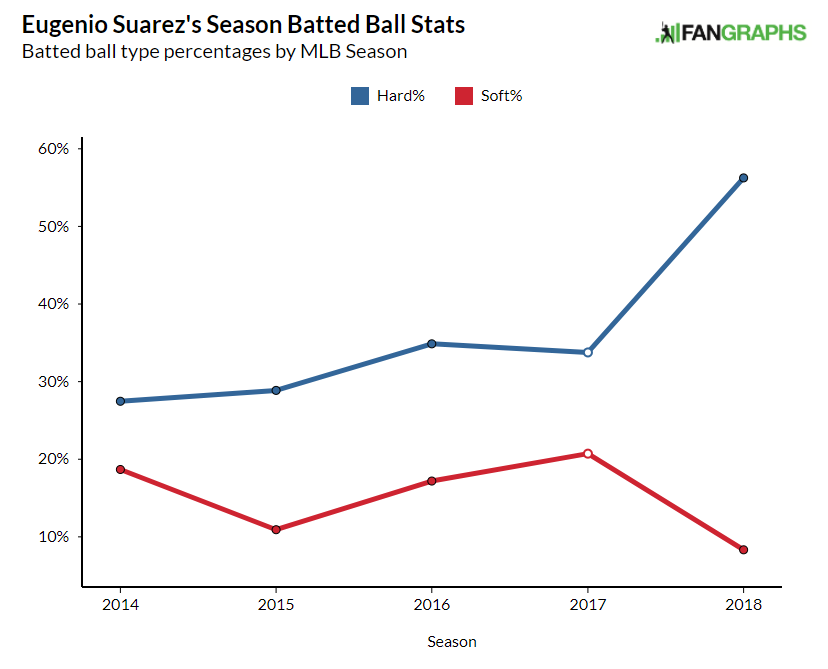 While he does not have enough plate appearances to qualify, he leads MLB among players with more than 70 plate appearances with a 56.3% hard hit rate. The league average is 34.4%. Sure, itÃ¢â‚¬â„¢s not sustainable but it has been fun to watch and has been reassuring considering he has not skipped a beat coming back from the fractured thumb.

His performance has been so good that it begs the question if he has been outperforming his play. The easy answer to that is no.

The Statcast metrics so far this year are very encouraging. Not only is his exit velocity up, his launch angle is up and his barrel% is way up, meaning he is getting great contact and keeping the ball off the ground. His xSLG of .717 is just a tad below Mike TroutÃ¢â‚¬â„¢s .723 and higher than pretty much everyone else not named Mookie Betts. For as good as he has been hitting the ball, his numbers could be even better than what they are.

While there have been solid improvements across the board, a big piece of his success is coming against breaking pitches.

He is seeing slightly less curves and sliders than last year at just under 24% of all pitches seen but he is certainly making the most of them when he gets them, tuning them up 60% of the time. This is clearly something pitchers are trying to avoid as they are throwing him more junk than ever before.

Both sliders (yellow) and the curves (blue) have been thrown in the strike zone less than any point in his career.Ã‚Â As his offense has developed, pitchers have been less likely to leave breaking stuff where he can get it, and this year is clear proof of that. While his Chase% is up slightly, his Swing and Miss% is down. Essentially, he has added tons of power against breaking balls without sacrificing plate any discipline to do so.

In fact, his overall plate discipline metrics are very strong with a 14.1% BB-rate and only a 16.7% K-rate. The improvement so far is coming from, again, the breaking balls.

The sliders and curves have the big drops in K% as he has only struck out once on those so far. Eventually, this will normalize a bit and Suarez will come back down to Earth. But for the time being, he is clearly doing something right and has almost completely neutralized his opponents breaking pitches. In doing so and forcing pitchers to pound the zone with fastballs, Suarez is giving himself plenty of opportunities to be successful at the plate.

Most endings (along with beginning and middles) this year have not gone well for the Reds. That is not going to hold true for this post. In closing, here is EugenioÃ¢â‚¬â„¢s gorgeous heatmap. May he continue to bring us some joy as we journey through the remainder of 2018. 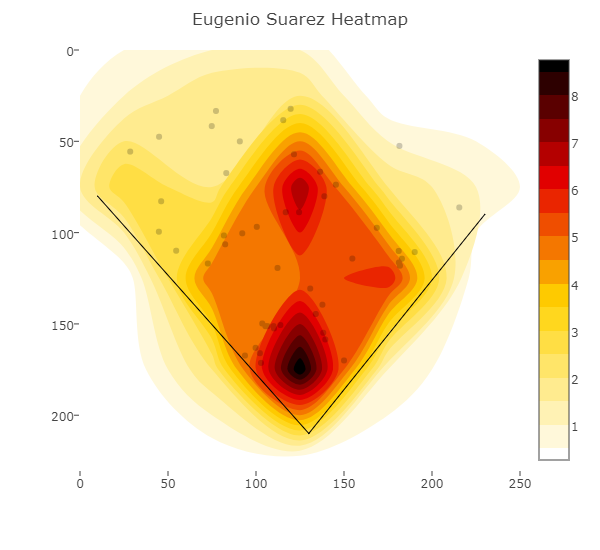