Let’s take a brief walk down pre-rebuild memory lane shall we:

By the records, the Reds and the Braves have been on eerily similar paths. Playoff teams that saw their window of opportunity fade and began the long, small-market process of rebuilding through the draft, selling assets, and tastefully tanking for years.

For further comparison, here are the Reds still around from that 2014 40-man roster:

And here are the Braves with the same criteria:

If you’re reading this like I am, that’s a franchise face and rotation ace for both teams, coupled with two catchers and a secondary franchise face for the Reds. Basically, everyone who wasn’t tied to the ship has been tossed overboard since 2014. (Arguably, Billy Hamilton should have been tossed as well, but his role is particularly tricky.)

What I am trying to get at is the Reds and the Braves were nearly identical teams starting their rebuilds, so why are the Reds still bottom three in the MLB and the Braves on top of the NL East once again?

In my opinion, the best way for a small-market team to rebuild is through the draft. That’s not a controversial opinion by any means, but I think it bears to be repeated that I wholly disagree with the Reds “best player available” strategy.

What I’m looking at here is how the 2015-2017 drafts have currently shaped both the Braves and Reds 40-man rosters and top 30 prospects according to MLB Pipeline. For both teams, 15 of their top 30 prospects have come via draft, with all four of the Reds top prospects being drafted in the past three years. Six of the Braves top 10 prospects were drafted in house and 12 of the top 20 were. For the Reds, 10 of their top 20 were in-house draft picks. Currently, two Braves draft picks from the last three years are on the 40-man (Mike Soroka and A.J. Minter) while the Reds only have one (Tanner Rainey).

That’s a lot of contextless numbers, so here’s the takeaway of how the two teams have drafted between 2015 and 2017: Basically the same. More of the Braves draftees are at AA or higher, whereas the Reds have taken more high upside guys still in A or A+ but that’s about it and even that difference is slim.

So if the two teams are rebuilding as effectively as they can through the draft, how did the Braves come by their surplus of young talent?

At the end of 2014, the Reds tradable assets included Johnny Cueto, Aroldis Chapman, Jay Bruce, Todd Frazier, Mat Latos, Mike Leake, and Alfredo Simon. All were eventually moved in the subsequent three seasons. For those seven players, the Reds received 18 prospects in return, of which eight are on the current 40-man roster and a ninth, Rookie Davis, appears on the Reds Top 30 prospects.

If we include the returns of the 2016 Dan Straily trade, then ten players are on the current 40-man roster Ã¢â‚¬â€ the additions being Luis Castillo and Austin Brice.

All in all, watching these trades has been frustrating at times, but the Reds really haven’t done poorly.

Another example: Justin Upton was traded to San Diego for four guys including Max Fried and Mallex Smith. Later on, Smith was traded to the Mariners with Shae Simmons for Luiz Gohara and another prospect. That’s two of the Braves top seven prospects for half a year of Upton in San Diego and two flights across the country for Smith.

While the Reds have built a solid deck of young prospects through their moves, the Braves managed some trading voodoo to wind up with five top pitching prospects and two of their current starting nine. The more I look at these deals, it might be another wash between the Braves and Reds, but it very much feels like the Braves won the battle of salvaging value from older guys.

So this may be a bit unfair given that the Braves forfeited the top prospect, Kevin Maitan, associated with the international tampering scandal. However, when you remember that the Braves two best young players, Ronald Acuna Jr. and Ozzie Albies, are both international players, it doesn’t look good for the Braves rebuild being on the up and up. While Acuna and Albies were both signed before disgraced former General Manager John Coppolella took over, other young international prospects like Critian Pache (No. 9), William Contreas (No. 18), and Derian Cruz (No. 20) were.

Probably unfair to speculate on my part that the Braves rebuild has outdone the Reds on the basis of tampering alone Ã¢â‚¬â€ the Reds do have a similar number of international prospects supposedly signed above table after all.

At the end of the day, it might just be luck. The Braves took chances on really young guys and then pushed them through the minors aggressively. The Reds have taken fewer chances on younger guys and have not nearly been as aggressive with development. That could be a system wide issue on the Reds part or it could be false correlation on mine. Whatever the case, the Braves look to have rebuilt and are ready to compete in the NL East for the next few years to come. The Reds…well 2020 could be our year.

It’s been an abysmal start to the year for the Kangaroo Court Fees, but Mike Soroka (Braves No. 3 prospect) has been called up, meaning my time to shine is near. With Soroka, Franklin Barreto, Nick Senzel, Austin Meadows, Austin Voth, and Jake Bauers all nearing the Majors, my fantasy fortunes finally may come to fruition. But for now, it’s 0-4 to start the season and the second fewest points scored.

In better news, I have surpassed Matt Wilkes for fifth in the post views standings, meaning there is a strong youth movement near the top of the leaderboard. Jason Linden is also within striking distance and Nick Kirby isn’t too, too far ahead. Top three will be mine this year, I can feel it. 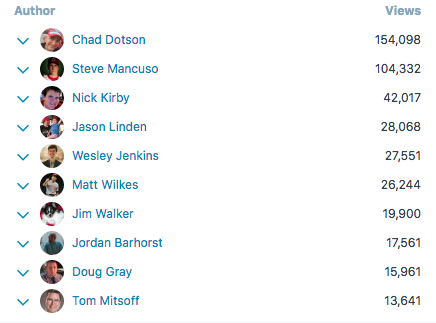