When the Reds fired pitching coach Mack Jenkins on April 18, they brought in Danny Darwin from Double-A Pensacola to take over the job. One of his goals for the team’s pitching staff: get them to throw inside with more regularity.

“WeÃ¢â‚¬â„¢re going to pitch inside. ThatÃ¢â‚¬â„¢s one thing that needs to happen here, try to get part of the plate.”

Tyler Mahle, who thrived under Darwin’s tutelage in the minor leagues, has certainly adopted that philosophy. With a plus fastball but merely average secondary offerings, it’s a mantra he needs to have. Hitters already know they’re getting the heater most of the time, and pounding them inside is the best way to limit hard contact and establish his changeup and slider.

In Mahle’s first start with Darwin as his pitching coach once again, he threw six no-hit inningsÃ‚Â against the Braves and set a career-high with 11 strikeouts. The pitch mix wasn’t much different than usual — he threw 68 four-seam fastballs among his 97 total pitches — but the way he deployed it varied a bit from his previous outings. With the way his fastball tails to the right, establishing the inside part of the plate is particularly important against left-handed hitters.

Mahle did that quite a bit in his first four starts, but he really emphasized it last Tuesday. The trend continued into Sunday versus the Twins, and the results were again impressive: 6 1/3 innings, one run, four hits, two walks, and seven strikeouts.

On the left is his fastball heat map vs. lefties through his first four outings, and on the right is the heat map from his most recent two:

Clearly, he threw inside quite a bit to begin with. But it’s been a primary focus over the last two starts, and it yielded fantastic results for Mahle.

In the no-hit bid, eight of his 11 strikeouts came on the fastball, and six of them came against left-handed batters. Five of those six started out of the strike zone and tailed back over the plate. Four were called strike threes. 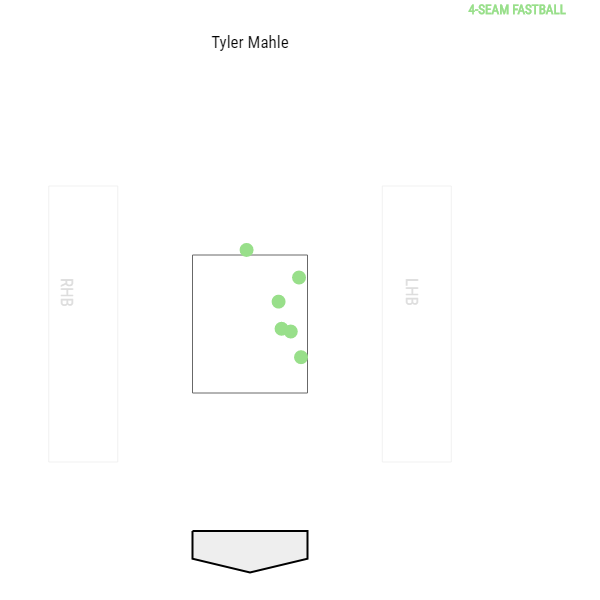 Here’s a look at one of those Ks against Braves center fielder Ender Inciarte:

A similar trend took hold on Sunday in Minnesota, with six of Mahle’s seven strikeouts coming on the four-seamer and three of them clipping the glove-side corner of the plate for strike three — two against lefties and one against a righty.

Because of the way his fastball tails, Mahle hasn’t come in on right-handers quite as much, instead focusing on clipping the outside corner. But he has thrown inside a bit more, primarily up and in, since reuniting with Darwin.

The most important takeaway from these graphics, of course, is Mahle isn’t missing his spots over the middle so much.

Why is this so important for someone who primarily throws fastballs? Since Mahle’s changeup and slider aren’t plus pitches right now, his fastball command has to be pinpoint, particularly because he’s throwing it as a strikeout pitch in most cases over his off-speed offerings. When he’s left it out over the middle of the plate, he’s been burned; four of the seven home runs he’s allowed this year have come on the heater. By pounding hitters inside, he can saw them off and reduce their ability to make hard contact.

Here’s a look at his average exit velocity allowed by zone with the fastball (vs. lefties on the left, vs. righties on the right): 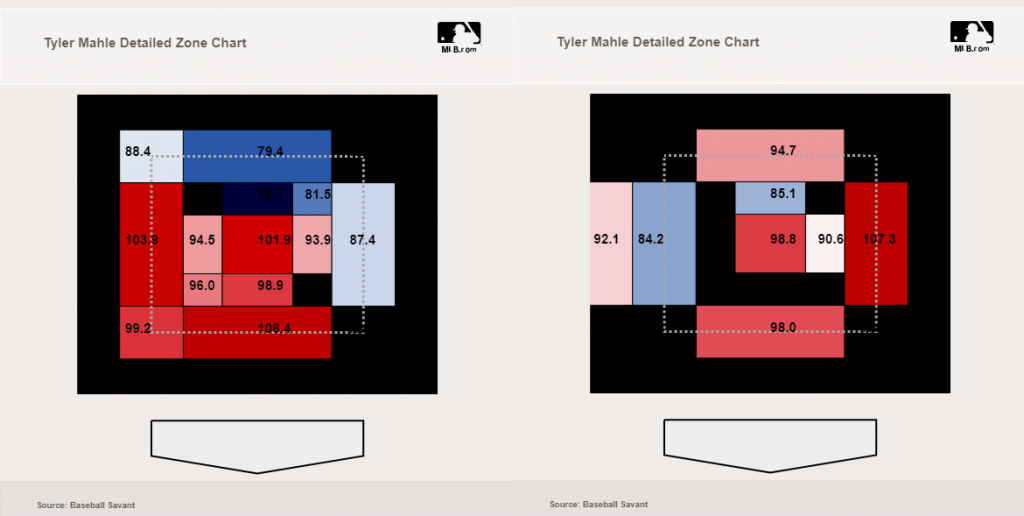 The effectiveness of throwing the fastball inside is clear. The more Mahle can paint the corner, the weaker contact hitters will make. This also allows Mahle to beat hitters on the outside corner, as they can’t lean out over the plate and cover those pitches on the outside edge without the risk of being plunked.

Take a look at some of his strikeouts on Sunday, particularly against Brian Dozier. Mahle beat Dozier on the inside part of the plate in his first two at-bats before blowing a 95-mph heater by him on the outside corner in his third plate appearance.

By pitching inside and locating his fastball with such precision, Mahle’s other pitches also play up. For example, in last Tuesday’s no-hit bid, his slider got six swings and misses, doubling his previous career-high on the pitch in any game. Those whiffs came on only 20 sliders thrown, the third-fewest he’s thrown in any big-league outing.

Mahle will need to develop improved off-speed pitches as time moves along. He certainly doesn’t have the raw stuff of a Robert Stephenson, Brandon Finnegan, or Cody Reed. But the one advantage he has over them — fastball command — is the foundation for any successful pitcher. Now that he’s starting to locate it with regularity, he’s finding more success and should hopefully see improved confidence in his slider and changeup.

The early returns are promising. He’s not only throwing his changeup far more than he did in four 2017 starts, but his whiff rate on all three of his offerings has increased (and his fastball whiff rate ranks 16th among 77 pitchers who’ve thrown the pitch 150+ times). If those secondary pitches continue come along — or one can turn from average to above average — he’s going to be even more fun to watch every five days.