Death, taxes, and Joey Votto looking mortal during April. It is an odd thing to guarantee but here we are, the fourth year in a row that Votto looks more like Skip Schumaker than one of the greatest hitters of this generation.

For me, VottoÃ¢â‚¬â„¢s struggles can be compared to pet peeves we have with our significant others. For example, my fiancÃƒÂ© and I recently discussed the fact that I oftentimes leave the toilet seat up. It annoys her and she would prefer I did not do it, but in the grand scheme of things it is not a big deal and she still loves me like Kanye loves Kanye (which is a good thing).

That is very much how I feel about Joey Votto not being awesome at baseball to start the season. ItÃ¢â‚¬â„¢s a little annoying because I would rather watch perfect hitting than imperfect hitting, but in the end, he is still my favorite player and will go down as one of the best Reds of all-time. So, really, who cares about another April slump?

The answer is that we all care because we love the Reds and unfortunately this is a pretty important part of the Reds season so far. With that in mind, here are VottoÃ¢â‚¬â„¢s last three plus years of wOBA. 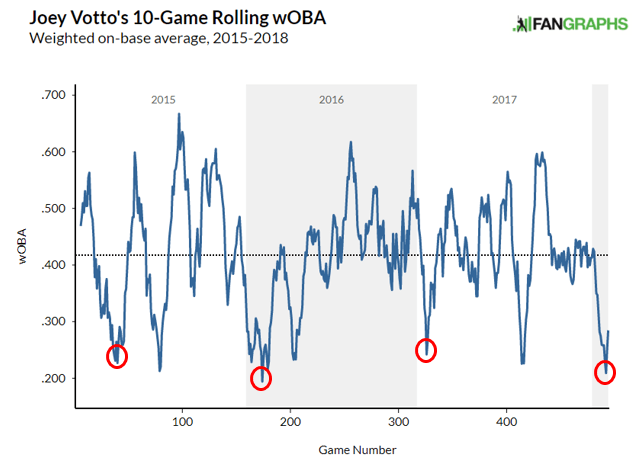 Aside from 2015, the past three seasons have been a straight drop off starting with day Opening Day. Interesting note that of the seven Ã¢â‚¬Å“slumpsÃ¢â‚¬Â that are visible, six of them have come in the first half of the year. The four circles pinpoint the specific games that I targeted that represent the lowest point in each drop. The table below details the length and time frame of each slump that I looked at.

Although this is not super scientific, it does give a pretty accurate representation of the toughest stretches Votto endured. The length varies from 12 to 24 games and lasts anywhere from April 15 to May 16.

Comparing wOBA, which measures overall offensive value, and xwOBA, which uses Statcast data to blend in the quality of contact and provides a more predictive number, can show us if a player is outperforming or under performing their actual performance.

During each of VottoÃ¢â‚¬â„¢s early season slumps, he under performed relative to his xwOBA. The degrees to which he under performed is what make this year stand out, as he currently has a wOBA of .272 compared to an xwOBA of .406. That is a huge difference and places him 3rdÃ‚Â in MLB for players with over 50 at-bats.

In each of these seasons, while his actual stats were very un-Votto like, there were always underlying metrics that showed he would turn it around. Based on his current xwOBA, it appears as if the trend will continue, potentially in a big way.

Aside from solo performance it is also important to consider the overall context of the team. Just because Votto is Votto and is expected to be fine in the long run does not mean that his performance in the first 21 games has not hurt the Reds.

So far in 2018, Votto has contributed -0.23 Win Probability Added, which is just slightly worse than 2016. It is really not that far out of line with previous slumps, though hisÃ‚Â  RE24 (run expectancy in any given base-out state) is significantly lower than last year. It is always frustrating to watch him struggle, but those struggles have come at less opportune times and have hurt the team a bit more so than in years past. However, Votto is not alone as the entire team has been miserable this year.

There seem to be two distinct sides when talking about Votto’s struggles.Ã‚Â While his past performance has earned him the benefit of the doubt from some, others will burden him with more of the blame because he is the team’s best player. Both of these are correct, in a sense. Yes, Votto will turn it around and there are other people and factors that have hurt the Reds more. Also yes, Votto’s MVP caliber play in the past leaves more room for him to underperform, creating a bigger hole for the rest of the team to have to fill.

The reality is that it is impossible to say that Votto has not been part of the problem with the first 21 games of 2018. However, with his pedigree being what it is and statistics that say he will improve, he should not be the main concern of this team going forward.

2018 has been historically bad and make the past three seasons look like the glory days. With so much going wrong, it is no surprise that VottoÃ¢â‚¬â„¢s poor performance is a bit tougher to stomach. In a year when any glimmer of a bright spot helps to dull the pain, Votto has been mostly unable to provide any relief. However, as the season trudges on, this will more than likely become another trivial episode in an otherwise dependable relationship.