Well, now that Bryan Price is gone, the Reds are sure to make the postseason! Right? They only have to win…wait, 3-15?!? This man managed the team to 3-15?! Is it even possible to make the playoffs at this point?

So the short answer is: Yes and no.

Before diving into the various semantics of 2018 Cincinnati Reds Playoff Team, I want to point out that the 3-15 record isnÃ¢â‚¬â„¢t entirely PriceÃ¢â‚¬â„¢s fault. He definitely did the team no favors with his decision making, but weÃ¢â‚¬â„¢re 18 games in and Mike Trout has only been worth 1.5 wins. ThereÃ¢â‚¬â„¢s no way Price has been worth the inverse of Mike Trout. Bryan Price, may he have the best of luck in future endeavors, at most only cost this team of one win, and a 4-14 team really isn’t any better than a 3-15 one.Ã‚Â

But back to the maths. LetÃ¢â‚¬â„¢s start with the yes side because it is far simpler than no. Yes, the Reds can make the playoffs because they have not been mathematically eliminated yet. Simple as that.

Before the season, our own Chad Dotson wrote of the RedsÃ¢â‚¬â„¢ playoff chances:

Ã¢â‚¬Å“What will it take to get there? Well, last yearÃ¢â‚¬â„¢s Minnesota Twins did it with a 85-77 record. ThatÃ¢â‚¬â„¢s our baseline, as itÃ¢â‚¬â„¢s the lowest win total of any playoff team in the six seasons since the second Wild Card slot was added.Ã¢â‚¬Â

LetÃ¢â‚¬â„¢s look at the no then. Beyond just the obvious unlikelihood of a 3-15 team suddenly turning into a 91-71 pace team, it would be unprecedented if the Reds made the playoffs. The worst 20-game start that still went on to make the playoffs was the 2002 Angels at 6-14. So even if the Reds go on a two-game winning streak (!!), they would still have to make history.*

*Only looking at the Wild Card era here, 1996 to present, because comparing the current state of affairs to a completely unrelated state of affairs isnÃ¢â‚¬â„¢t useful. Also, 1994 and 1995 were both strike-shortened, so unincluded despite being part of Wild Card Era.

On the off chance that the Reds can go 6-1 over the next week of games, then they expand their scope of teams that have made the playoffs with that bad of a start to…three.

Besides the AÃ¢â‚¬â„¢s, you have the 2006 Minnesota Twins who won the AL Central atÃ‚Â 96-66 and the 2015 Texas Rangers who won the AL West at 88-74.Ã‚Â And guess who the second best player according to WAR was on that Rangers team? ThatÃ¢â‚¬â„¢s right, Yovani Gallardo.Ã‚Â

So what will take for the Reds to become the first 5-15 team to make the playoffs? Well, two wins in the next two games to start. But otherwise, the same keys that stood at the start of the season still apply. The pitching has been solid so far, with vintage Homer Bailey back and Luis Castillo, Tyler Mahle, and Sal Romano all showing various signs of promise. Jesse Winker will be a better table-setter for Joey Votto who will (hopefully) kick into gear and start driving the offense again. Scott Schebler will come back, Nick Senzel will be called up, Eugenio Suarez will heal. The next 144 games will go better than the first 18, that IÃ¢â‚¬â„¢m sure of.

Will it be enough to get the Reds to the playoffs? Probably not, but IÃ¢â‚¬â„¢ve run the numbers and thereÃ¢â‚¬â„¢s definitely a chance.

The start of the 2018 season has not been kind to my Kangaroo Court Fees. In the first two weekly matchups, I have been outscored 1555 to 1298, dropping both. Currently tied for last in the league, I can’t really hope for much. My team has been decimated by injuries and my own stupid tendency to sell low in trades. For reference, here are all of my injured players and players I have traded away this year:

That was more depressing to write out than I thought it was going to be. At least I still have Shohei Ohtani? (Shameless plug: Read my piece on Hunter Greene and Ohtani later this afternoon.) (It’ll help me in the author views race.) (Which I’m also losing.) (To my archnemesis Matt Wilkes.) (Sigh.) 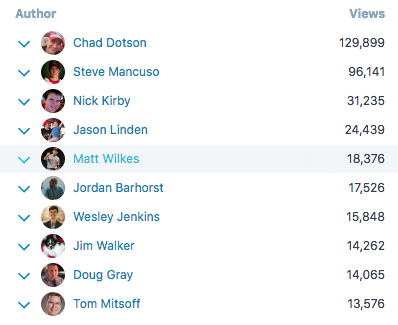