There’s an episode of Cheers where Norm has an interview for his dream job as a beer sampler at a local brewery. At the bar before the interview, Rebecca Howe tells Norm a story of her blowing an interview so badly she ended up singing knick-knack-paddy-whack-give-a-dog-a-bone. Rebecca’s story gets stuck in Norm’s head. When Norm met the president of the beer company well,Ã‚Â the results were predictable, if humorous.

The moral: overthinking and the power of suggestion about disaster can cause serial repetition of that disaster.

I believe that phenomenon, although less funny in this context, is the best explanation of Reds pitchers continuing to groove offerings to Eric Thames.Ã‚Â Knick knack paddy whack.

In Monday’s recap, I joked about hoping the Reds that night hadn’t scored all the runs they were going to in April. It was a joke, baseball gods, a joke.

Tyler Mahle has started four games in 2018. During his 21 innings, the Reds have scored exactly one run. Today, he gave up four walks (one intentional) and struck out six Brewers.

Mahle’s highlight – possibly the best pitch of his season, or career – was in the fourth inning against Christian Yelich. The Reds had walked Thames to load the bases with two outs. Mahle started Yelich’s at bat by throwing three balls. After that, Mahle didn’t back down or give in. He threw three fastballs 95-95-97 mph, with Yelich swinging at the final pitch. Mahle’s last fastball, that painted the outside corner, was clocked at 96.8 mph, a full 1.3 mph faster than any other pitch Mahle has thrown this year. Yelich missed it. 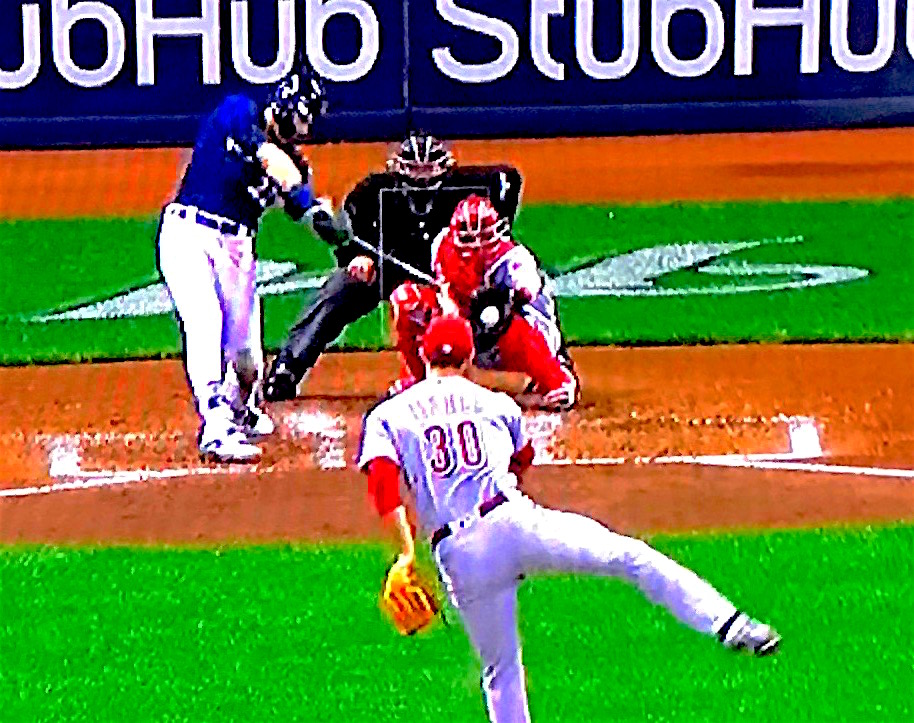 The Reds offense struggled again today. Now 19 innings without a run. 4 shutouts in 18 games. Some of that is the loss of Eugenio Suarez and Scott Schebler to injury. Some of it is veterans like Joey Votto and Adam Duvall not living up to their career numbers. Zack Cozart’s production last year was huge. A big chunk of it though is lousy, terrible, soft at bats.

Since Suarez was injured, the combination of Cliff Pennington, Phil Gosselin and Alex Blandino have had 51 plate appearances. They’ve managed 3 singles and 3 walks and the rest outs. That’s a line of .058/.117/.058.

Take the first inning (please). Jesse Winker led off by lining a double over Christian Yelich in centerfield (Winker power alert), a ball that gets mis-played into three bases. With Winker on third and no outs, Jose Peraza Ã‚Â lunged at the first pitch, way out of the strike zone and tapped it to the third baseman. After the Brewers walked Votto, Duvall tapped a pitch back to the mound. Then Scooter Gennett popped out. No runs.