Sal Romano has the fastball velocity. He has a nice breaking ball to work with, as well. Neither of them are elite pitches, but they give the right-hander a solid foundation to work from. Two-pitch starting pitchers without dominant stuff are rare for a reason, however: it’s hard to keep hitters guessing when they have a 50/50 shot of knowing what’s being thrown at them. This is especially true when facing a pitcher for the third or fourth time in a game.

Developing a changeup has been Romano’s mission since coming to the major leagues. Why the Reds didn’t have him work on the pitch more in the minor leagues — similar to what they did with Tony Cingrani — is a mystery. While Romano showed increased confidence in throwing the pitch as 2017 wore on, he’s shied away from it through three starts in 2018. It wasn’t a dominant offering for Romano last year by any means, but it kept batters from having a good idea of what was coming in certain counts or adopting the “sit on the fastball, react to the breaking ball” approach. 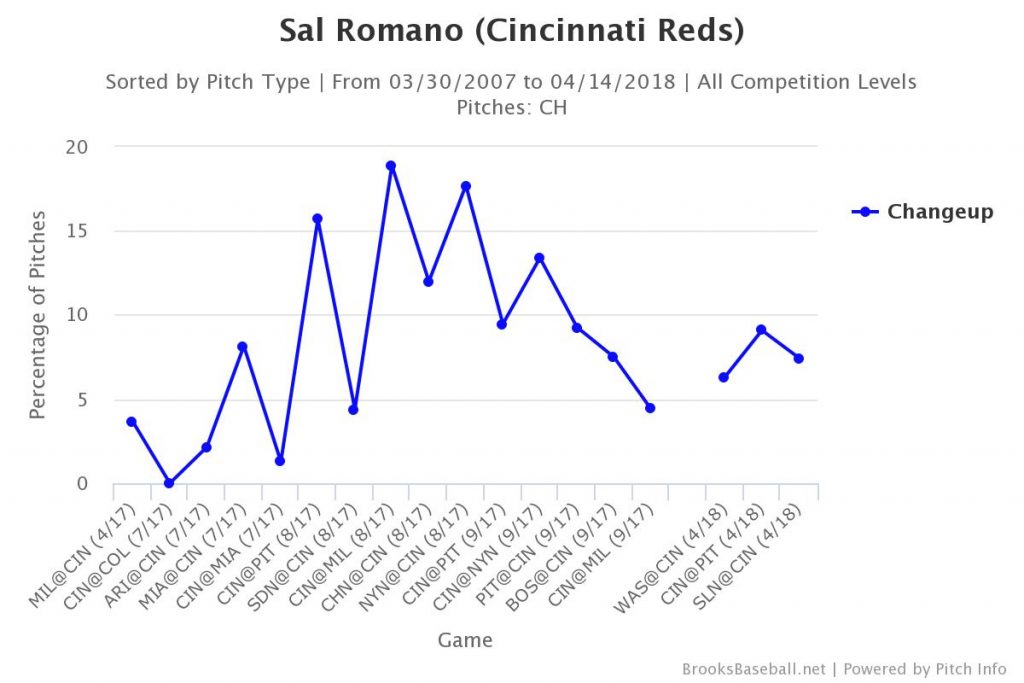 It’s clear Romano doesn’t have a great feel for the changeup, as he’s put it in the zone only 34.2 percent of the time he’s thrown it in his brief major-league career. He registered only a 5.6 percent swinging-strike rate on it last year and sits at a measly 5.0 percent through three starts this season.

Without a ton of movement, the change is often an easy take for batters. Romano got opposing hitters to chase it out of the zone only 21.9 percent of the time last year, and that number has dropped to 16.7 percent in 2018.

Let’s compare those figures to someone with an elite changeup like Luis Castillo:

Romano is probably never going to have a change like Castillo, but the table demonstrates just how much the pitch is still a work in progress. Without even looking at the movement metrics on the far right side of the table, you can see how much more English is on Castillo’s changeup just by looking at those swings and misses, especially out of the zone. Romano’s change doesn’t get much drop at all right now, nor does it ride in on right-handed hitters or dart away from lefties even remotely close to the way Castillo’s does. In short, it’s not fooling hitters.

However, mostly shying away from it might be hurting him when it comes to putting away his opponents.

With two strikes, hitters have a slash line of .320/.452/.440 against Romano in 2018. That may be nothing more than an early-season statistical anomaly. The walk rate (12.5%) is obviously a concern. But that batting line may also be a result of not getting many swings and misses, meaning he’s either nibbling around the edges of the strike zone in deep counts or having to rely on his fielders and the ball bouncing his way too much.

The right-hander has managed a poor 9.7 percent strikeout rate to this point, largely because his primary secondary offering hasn’t been effective. After registering an above-average 18.6 SwStr% on his slider — his primary putaway pitch — in 2017, Romano has a pedestrian 11.3 SwStr% on the pitch this year.

Poor control is undoubtedly hurting him on the breaking ball; he’s thrown it in the strike zone only 22.9 percent of the time vs. 35.9 percent last year. Batters are chasing it less as a result (35.4% vs. 39.9%) and swinging at it fewer times overall (45.2% vs. 51.6%). And when his slider control is poor, it makes not having a reliable third pitch even more costly. Those factors have played a large role in his 5.87 ERA and 5.88 xFIP through three outings.

Perhaps nothing shows Romano’s hesitance to throw the changeup more than this stat: he’s used it zero times with two strikes this season. When he needs a putaway pitch, he’s going with the fastball more often than not because his slider hasn’t been reliable. Hitters know it, too, crushing the pitch for a .488 slugging percentage (.513 in 2017) and .218 isolated power (.220).

Romano has good fastball velocity (93.9 mph in 2018, 95.2 mph in 2017), but if a batter knows it’s coming when they get down in the count, the results won’t always be positive. Fortunately, Romano gets a lot of groundballs (50.8% for his career), even with the heater (44.2%), to make up for it. Ideally, he’ll also get a few more strikeouts as the weather heats up and he gains more control of his slider like he had last year.

On days his breaking ball isn’t sharp, though, he needs that changeup more than ever. Right now, it just isn’t there. Perhaps he’ll start to unleash it more as the 2018 season wears on, much like he did last year, but it’s something to keep an eye on when Romano takes the mound tonight and moving forward.