In honor of these two men — both of whom are still with us — please enjoy these excerpts from the cutting room floor. 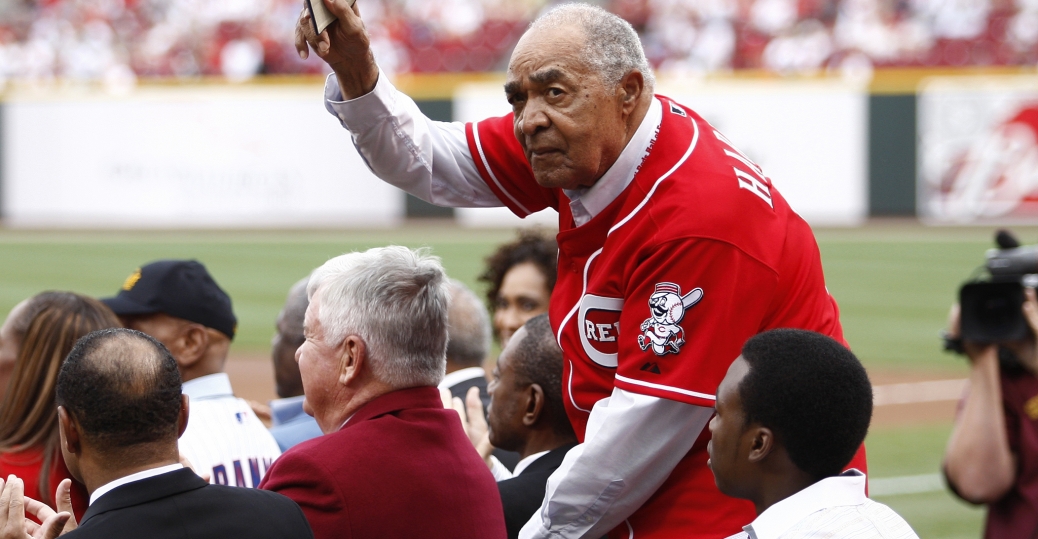 Chuck Harmon was, and still is, a remarkable man. One author referred to Harmon as “a poor man’s Jackie Robinson.” While the line may sound unkind, itÃ¢â‚¬â„¢s one that any ballplayer — or person, for that matter — would accept as high praise.

Harmon was born in Washington, Indiana in 1924, to one of the few black families in that southern Indiana railroad town.Ã‚Â A schoolboy star in both basketball and baseball, Harmon often faced teams from nearby Princeton, Indiana, led by future Dodger first baseman Gil Hodges — the two were born only 19 days apart, and competed against each other in both sports. (HodgesÃ¢â‚¬â„¢ biographer, Mort Zachter, later credited that friendship with making Hodges particularly sensitive and supportive when Jackie Robinson joined the Dodgers in 1947.)

Along with his older brother Bill, Chuck Harmon led the Washington High School Hatchets to back-to-back Indiana state high school basketball championships in 1941-42. Although the nearby Indiana University Hoosiers werenÃ¢â‚¬â„¢t interested,* Harmon was recruited to play both baseball and basketball at the University of Toledo, but his focus was on the court. (Rockets basketball coach Burl Friddle was quite familiar with southern Indiana players — heÃ¢â‚¬â„¢d previously coached at Washington High himself.)

* If Harmon had attended IU, he may have been a Red even sooner. Due to wartime travel restrictions, the Reds held spring training on the IU campus in 1943 and Ã¢â‚¬Ëœ44. While there, team brass happened across a very large, very athletic college football/baseball player and made a note to sign him after the next football season. That tight end/centerfielder, Ted Kluszewski became a Reds legend. Who knows what mightÃ¢â‚¬â„¢ve happened if Chuck Harmon had been his teammate that afternoon?

At Toledo, Harmon joined an all-freshman starting five, which improbably reached the finals of the 1943 NIT (then as significant a tournament as the NCAA). Harmon scored six points in the finals loss to St. JohnÃ¢â‚¬â„¢s, and didnÃ¢â‚¬â„¢t find the 18,000 person crowd at Madison Square Garden intimidating. Ã¢â‚¬Å“I had played before crowds almost that size in high school back in Indiana,Ã¢â‚¬Â he said in Marty Ford PierattÃ¢â‚¬â„¢s excellent biography First Black Red. Ã¢â‚¬Å“That wasnÃ¢â‚¬â„¢t a problem.Ã¢â‚¬Â

WWII soon intervened, and put HarmonÃ¢â‚¬â„¢s collegiate career on hold. Only a month after the NIT finals, Harmon was drafted into the United States Navy. He spent the war years stateside; black soldiers were generally restricted from combat units in the segregated armed forces. At Great Lakes naval base, the segregation extended even to the sports field — Harmon joined an all-black team, alongside future Hall of Famer Larry Doby, and played against white sailors like Mickey Cochrane, Frank Baumholtz, and Virgil Trucks.

After the war, Harmon return to Toledo to resume his baseball and basketball careers for the Rockets, eventually earning six varsity letters and a career average of 13 points per game.

Harmon was also a veteran of the Negro Leagues, but only for a weekend. And you actually wonÃ¢â‚¬â„¢t find Chuck HarmonÃ¢â‚¬â„¢s name in any record books. It was early summer of 1947, and Harmon was waiting to hear back about a summer job with the Toledo parks department. Instead, he got a call from a scout for the Negro American LeagueÃ¢â‚¬â„¢s Indianapolis Clowns, and decided to play professional baseball instead of running summer camps. But to preserve his eligibility at Toledo, he joined the Clowns under the name Charley Fine.Ã‚Â Ã‚Â (The fake name was suggested by Goose Tatum, the ClownsÃ¢â‚¬â„¢ first baseman, but a man more famous as the original Ã¢â‚¬Å“Clown Prince of Basketball,Ã¢â‚¬Â a member of the Harlem Globetrotters, and a 2011 inductee into the Naismith Memorial Basketball Hall of Fame.)

Harmon/Fine joined the Clowns in Indianapolis on a Wednesday. Four days, four cities, four games (and two rainouts) later, Harmon had a clear-eyed view of life in the Negro Leagues, and it was nothing like the first class travel of a big-time college basketball program.

“I decided that wasn’t for me,Ã¢â‚¬Â he said later. Rather than just quit, Harmon faked a phone call from his sister, and told Clowns management that the parks & rec job had come through, after all. As it happened, by the time he arrived home, his sister had called, and the parks job really was waiting.

About a month later, the same scout came calling, but this time, on behalf of the St. Louis Browns. The big leagues — this was a different story entirely. Jackie Robinson had integrated baseball a few weeks earlier, and now the Browns were making their move. Harmon jumped at the chance, thinking he would go directly to the majors. He signed with the Browns on July 19, 1947.

Unfortunately for him, the Browns had a different plan. They’d signed Hank Thompson and Willard Brown a couple days earlier — those were the men who’d go directly to the major leagues and integrate the Browns. Harmon was sent to Gloversville, NY, in the not-so-glamorous Canadian-American League, where he hit a respectable .270 for the summer.

Under 1947 NCAA rules, Harmon’s pro baseball career didn’t affect his collegiate basketball eligibility, but a rule change the following year meant that he’d have to choose between the 1948 pro baseball season and his senior basketball season at Toledo. He chose basketball, and spent the summer of Ã¢â‚¬Ëœ48 playing semi-pro baseball for a factory team (where he made more money than he had with Gloversville).*

*Harmon was invited to the Boston Celtics training camp in 1950, where he narrowly missed becoming the NBAÃ¢â‚¬â„¢s first black player.

Graduating in 1949, Harmon returned to the Browns organization and spent time with the Olean and Gloversville teams in New York. After the 1949 season, the financially-strapped Browns cut ties with several of their minor league affiliates, which made Harmon a free agent. He stuck with Olean (now an independent club) for 1950 and Ã¢â‚¬Ëœ51, and simply demolished the PONY League. Over two seasons, he hit .374 with 141 extra-base hits and an estimated 280 RBI.*

*At Olean, Harmon was the very rare black player who had a white roommate. Generally, black players were kept together, and if there was only one of them, they stayed alone. Harmon stayed with 27 year-old rookie Paul Owens, who went on to serve as general manager and field manager of the Philadelphia Phillies in the 1970s and 80s..

This performance is what drew the Reds attention. The Reds signed him to the Class B Burlington (Iowa) Flints for 1952, where he hit .319 with 49 extra base hits and 25 steals. The following year, he was promoted to Tulsa, along with Nino Escalera. HarmonÃ¢â‚¬â„¢s bat, legs, and versatility were drawing attention. (HarmonÃ¢â‚¬â„¢s nickname was Ã¢â‚¬Å“the Glove,Ã¢â‚¬Â not so much for his defensive prowess, but because he carried a different glove specific to each position he played — a rarity for the early Ã¢â‚¬Ëœ50s.)

He made the club in 1954, and broke the color line in April, but struggled in spotty playing time. Like most bench players, black or white, Harmon felt that he never really got a fair shot with the Reds. He thought that with a little bit of regular playing time, heÃ¢â‚¬â„¢d have put up better numbers. Ã¢â‚¬Å“ThatÃ¢â‚¬â„¢s the only regret I have,Ã¢â‚¬Â he told author Brent Kelly years later. Ã¢â‚¬Å“I didnÃ¢â‚¬â„¢t think I really got a chance to really say, Ã¢â‚¬ËœÃ¢â‚¬â„¢this is your job.Ã¢â‚¬â„¢Ã¢â‚¬Â

Harmon sometimes wondered if his race played a role, but the 1954 Reds were a tough lineup to crack. Kluszewski, Gus Bell, Wally Post, and Jim Greengrass were all slugging, and all were significantly younger than Harmon.

The next year was more of the same — uneven playing time and disappointing numbers. By 1956, Frank Robinson had arrived and the Reds were turning the corner toward contention. Harmon was no longer a fit (from an on-field perspective — he was still well-liked by teammates), and was traded to the Cardinals. He spent a couple years in their system, before ending his major league career with the Phillies in 1957. Harmon wasnÃ¢â‚¬â„¢t done with the game, though. He played another three-plus seasons in AAA, finally retiring at age 37.

The two-sport star later served as a scout not only for professional baseball, but for the Indiana Pacers. Harmon also worked as an equipment rep for MacGregor sporting goods, and for many years as an administrator with the Hamilton (Ohio) County Courts. (Cincinnati lawyer and baseball writer Doug Dennis recently told a great story about working at the courthouse with Harmon.)

In his later years, Harmon became a regular fixture at Great American Ball Park, RedsFest, and the Reds Hall of Fame, serving as an informal ambassador and a conduit to seven decades of Reds history, and a link to teammates and opponents like Jackie Robinson, Willie Mays, and Roberto Clemente.

Saturnino Ã¢â‚¬Å“NinoÃ¢â‚¬Â Escalera may have only played one season in the majors, but he spent 13 other years in the minors, including 1132 games at AAA. He also played 17 winter league seasons in his home of Puerto Rico.

Born on December 1, 1929, Escalera grew up playing ball in the streets with a tennis ball and a broomstick, before joining a teenage Ã¢â‚¬Å“travel ballÃ¢â‚¬Â team that played in tournaments around the Caribbean, and as far away as Columbia.

Once, young Nino made it onto a winter league field during infield practice, and probed Negro Leagues legend Buck Leonard (known as Ã¢â‚¬Å“the black Lou GehrigÃ¢â‚¬Â) for advice on fielding short-hops at first base. (The two men reminisced about the conversation decades later, when Escalera was a scout and Leonard a member of the National Baseball Hall of Fame.)

Originally signed by the Yankees, Escalara also spent time in the White Sox and Indians systems, before the Reds acquired him early in the 1953 season and sent him to Syracuse. After an impressive season there (.305/.389/.451), Escalera joined the Reds in 1954. After his historic debut, Escalera appeared in only another 72 games. He simply didnÃ¢â‚¬â„¢t hit well enough to stick in the majors. The left-handed EscaleraÃ‚Â did play an inning at shortstop before he left, and is still the last left-handed throwing “shortstop” in Major League history, as part of a 1950s-era defensive shift.Ã‚Â

Winter ball is where Escalera excelled. In the 1950s, the Puerto Rican winter league brought an elite level of competition, headlined by Roberto Clemente, the islandÃ¢â‚¬â„¢s greatest player and a towering figure across Caribbean baseball. But he wasnÃ¢â‚¬â„¢t alone — names like Mays, Aaron, Campanella, Koufaz, and Cepeda regularly filled the box scores, and Nino Escalera played at their level.

His nickname was Ã¢â‚¬Å“El Caballero de la InicialÃ¢â‚¬Â (Ã¢â‚¬Å“The Gentleman of the GatewayÃ¢â‚¬Â — apparently for his well-mannered ways. Escalera wasnÃ¢â‚¬â„¢t ejected from a Puerto Rican league game until 1960), and he was known as a great defensive first baseman and solid hitter, eventually being elected to the the Puerto Rican Baseball Hall of Fame in its second-ever class.

After retiring as a player, Escalera served as a scout for nearly 30 years for the Mets and Giants organizations, signing several future major leaguers from across Latin America, including Puerto Ricans Jerry Morales, Ed Figueroa, Benny Ayala, and JosÃƒÂ© Oquendo, (future Red) ÃƒÂlex TreviÃƒÂ±o from Mexico, and Al Pedrique from Venezuela.

As a scout, Escalera was both perceptive and tireless. Escalera was so impressed by young Panamanian pitcher Juan Berenguer (a 15-year major leaguer) that he showed up at the Berenguer family home at 6:00 AM the morning after first seeing him. Mrs. Berenguer told Escalera that Juan was still asleep, and tried to send him away, nearly ending her sonÃ¢â‚¬â„¢s career before it started. Luckily for Juan, his older brother was awake, and he made sure Escalera — and the Mets contract he held in his hand — made it inside.

ItÃ¢â‚¬â„¢s probably no coincidence that both Harmon and Escalera were enormously accomplished outside of their brief tenure with the Reds. The fortitude and character they needed to reach the major leagues — especially in that era — served them well beyond their time on the diamond.