Disclaimer: I started writing this post Friday night, right around the time Adam Duvall decided he was going to make me look silly for it. Stats do not include Monday’s game.

A quick glance at the Reds offensive production so far in 2018 provides some context for a horrendous start. Ã‚Â Jumping down towards the bottom of stat sheet, we find 2016 All-Star Adam Duvall, who has been off to a terrible start at the plate. He leads the team in both home-runs and RBI (not saying much at this point) but has struggled to get much going other than that and currently owns a 59 wRC+. And that follows two strong performances since I started writing this, when he had a 29 wRC+. He is not the only reason the Reds offense is struggling, but he is among the biggest culprits.

DuvallÃ¢â‚¬â„¢s calling card is no secret; he is a slugger. Over the 2016 and 2017 seasons, he ranked 15th in the MLB with an ISO of .244. He hits the ball harder than average and pulls the ball more than average. So while a high pull rate isnÃ¢â‚¬â„¢t necessarily a bad thing, it is interesting that he is currently well above his own norm. 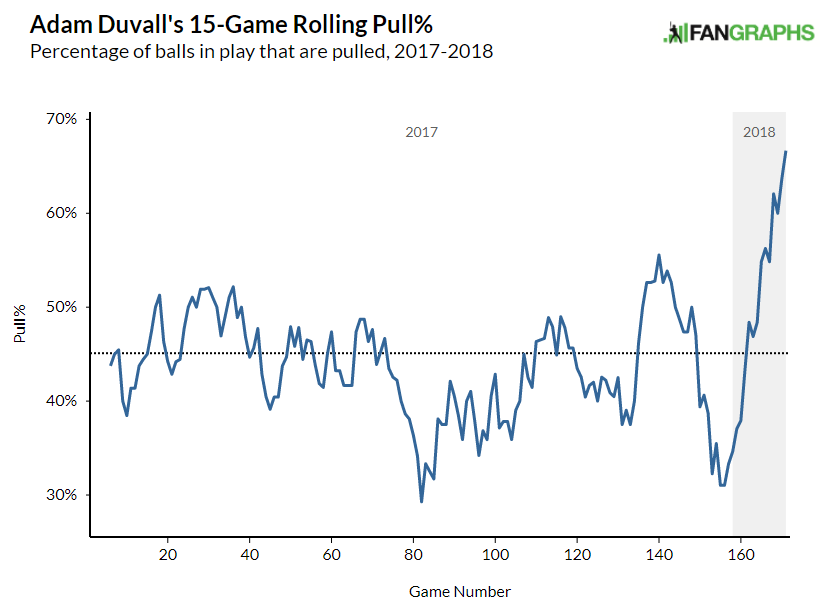 League average is just under 40% while DuvallÃ¢â‚¬â„¢s career average is just under 48%. So far in 2018 he is pulling almost 63% of balls, highest in the league among qualified hitters. Even for power hitters, there is an optimal amount of pulling the ball, and Duvall is way above it. Presumably, this is not something he is trying to do, but rather has been influenced in part by pitch location.

Not surprisingly, the highest concentration of pitches Duvall saw in 2017 (left) were on the outside part of the plate as pitchers try to avoid playing to DuvallÃ¢â‚¬â„¢s strength. In 2018 (right), he has seen a more even distribution of pitches across the strike zone. So if more balls are coming closer to where he can pull them, why is he not having success?

The easiest answer is that is has not been catching any breaks. While his BABIP as of Sunday night was a .156, it had been down to a .091 just a couple days earlier. The small sample of the young season shows how quickly a couple balls here or there can change things. Still though, a low BABIP indicates that there are better days ahead.

However, in addition to the high pull rate, other components of DuvallÃ¢â‚¬â„¢s batted ball profile are not ideal. He is creating more soft contact than normal and is also hitting more groundballs than normal. It is not to a level he has never been before, but his soft contact increased in the latter half of 2017 and could be a larger trend. And the increase in ground balls has been accompanied by an all-time low line drive rate, which is generally the result of weak contact. 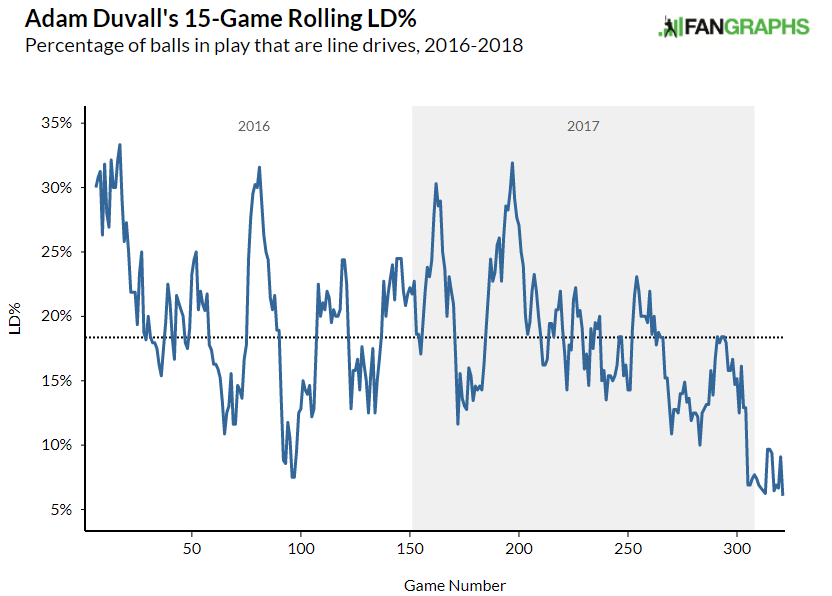 Duvall has always gotten the ball in the air, as his career average 20.1-degree launch angle and 47% fly ball rate will attest to. So far this year, it has pretty much either been in the air or on the ground. And of the balls in play to the left side of the field this year, his launch angle is 4.6 degrees, compared to 9.8 degrees last year. Even though he has gotten pitches to the inside of the plate, he has not been able to drive them as he has in the past.

Even with a high concentration of balls hit to 3B in 2017 (left), Duvall still made good use of left and center field. 2018 (right) has been way more concentrated to the infield, with very few balls going anywhere besides 3B or LF. 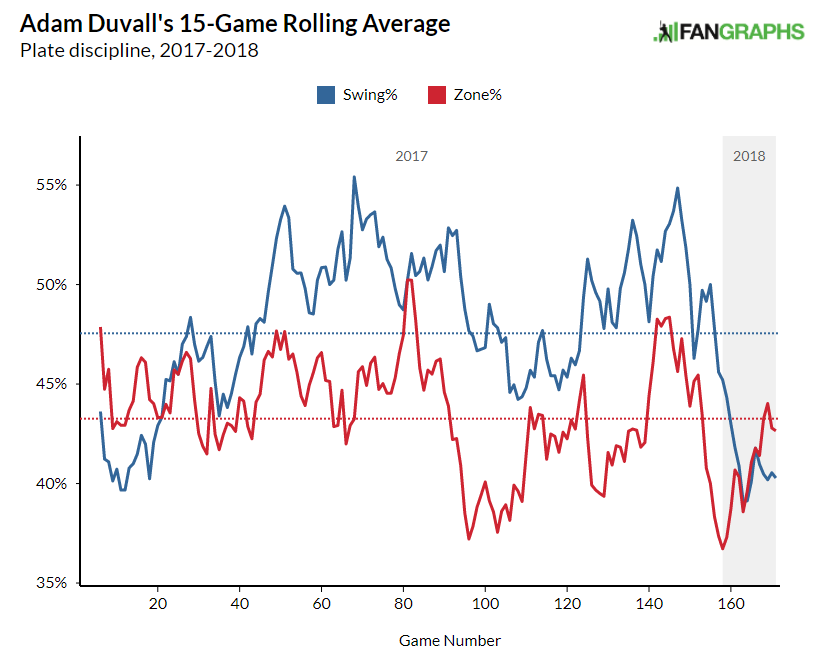 So far this year, 42% of pitches to Duvall have been in the strike zone, just below his career average of 43.4%. While that number may be a bit low, it is nothing compared to the drop off in Swing% which is 41.8% and well below his career average of 49%. Improving selectivity is something that players are always striving to do, so this makes sense, especially at the start of a new season. And while his BB% is slightly up, so is his K%, despite an even lower SwStrike%. Dvuall is taking too many pitches in the zone, perhaps because he is not yet comfortable with a potentially new approach. However, it could be an effect of not seeing the ball well out of the gate, which could also explain the weaker contact.

It is not like pitchers have figured out a magical way to always get Adam Duvall out. There is some variance at the pitch type level, specifically more sinkers and fewer four-seamers, but the overall breakout between hard, breaking, and off-speed pitches is very much in line with what Duvall saw in 2016 and 2017. The only variation is with how Duvall has performed against the pitches.

Higher whiffs per swing on breaking and offspeed pitches could be another indication that he is just not seeing the ball well at this point in the year. Even though he is swinging less and swinging and missing less overall, he is really struggling with non-fastballs.

Add it all up and Duvall is getting decent pitches to hit, but he is either taking them more so than before, swinging and missing on breaking/offspeed stuff, or swinging and not making solid, hard contact, leading to a lot of grounders to third base. Time will tell if he maintains and improves upon his newfound patience and starts connecting with and driving good pitches, utilizing the power that got him here.