Two years ago, Amir Garrett was the Reds’Ã‚Â minor league pitcher of the year. His prospect stock hit an all-time high, and he was one of the organization’s most promising arms among a sea of talent.

Flash forward to today and the 6-foot-5 left-hander has arguably never looked better on the mound.

Yet, he’s not in the starting rotation in either Cincinnati or Triple-A Louisville. He’s not even being used as a high-leverage reliever. Instead, he’s appearing in middle relief in the Reds’ bullpen, throwing mostly in mop-up duty to this point.

After last season, the bullpen perhaps seemed like the eventual landing spot for Garrett. Although he mostly impressed through his first six starts (4.25 ERA, which included a nine-run outing), he was sent to Triple-A in May due to service time considerations. Something was clearly off in his first two starts when he returned a couple of weeks later (13 ER, 12 H, 5 BB, 7 K, 6 HR) and he was briefly placed on the disabled list with right hip inflammation.

Nothing improved when Garrett came back, and a performance-based demotion to Triple-A came in July. Even against lesser competition, he continued to struggle (5.72 ERA, though his 3.94 xFIP looked a bit better) in 67 2/3 innings. Garrett returned to the majors in September and had four more forgettable appearances, finishing the year with a 7.39 ERA, 5.20 xFIP, 12.5 BB%, and 2.93 HR/9. It was a discouraging line, to be sure, especially considering Garrett was ranked the team’s No. 2 prospect coming into the season. As a result, he wasn’t even listed among the contenders for a rotation spot coming into spring training a few short months ago.

However, it was clear he was pitching injured for most of 2017, which he confirmed after the season. With that information in mind, it seemed too early to give up on Garrett. And it was.

After an offseason hip procedure, he clearly came into spring training with something to prove and was the club’s most dominant starting pitcher. With the hip injury behind him, he was able to plant his right foot without painÃ‚Â and the positive results followed. His velocity returned to the mid-90s, his control was improved, and — perhaps most importantly — his swagger reappeared.

“I’m just a baller, man. I will do whatever to help the team win,” Garrett said. “I feel l can help the team in multiple ways. I want them to know that.”

The 25-year-old finished spring training with a 3.18 ERA, 21 strikeouts, and only four walks in 17 spring innings. Despite the injuries to Anthony DeSclafani and Brandon Finnegan, though, Garrett was relegated to the bullpen to begin 2018.

If the Reds were in win-now mode, perhaps the move would make more sense in an effort to shore up a relief corps lacking in left-handed arms. But they aren’t. Although this is a year for “progress,” the starting five of the future is hardly set in stone.Ã‚Â After his spring training, wouldn’t it make more sense to send him to Triple-A to keep starting if he wasn’t making the rotation to begin the year?

In fairness, Bryan Price told the Cincinnati Enquirer’s John Fay, “We got him stretched out if we need him. ItÃ¢â‚¬â„¢s aÃ‚Â nice complement to a primarily right-handed rotation,” and “[Garrett] hasnÃ¢â‚¬â„¢t defined yet as a pitcher role.”

But he also seems to like Garrett in the bullpen a whole lot:

Ã¢â‚¬Å“He doesnÃ¢â‚¬â„¢t have to pace him himself,Ã¢â‚¬Â Price said. Ã¢â‚¬Å“He really can let it go. His stuff plays up a little bit, as it does with most starters transitioning to shorter stints.”

Ã¢â‚¬Å“He has the confidence to handle these higher-leverage situations as they come along. I can see him pitching his way into those spots.Ã¢â‚¬Â

And based on the team’s actions, the front office agrees.

Even when the Reds needed a starter after sending Finnegan on a rehab assignment, they curiously went with Cody Reed, whose first outing of the season on Monday didn’t go any better than his previous big-league starts. This was Price’s explanation, and it didn’t sound like one that indicated Garrett will be starting anytime soon (although, admittedly, that may be an overly pessimistic reading of the tea leaves):

“With the heavy left-handed influence with both the Nationals and the Cubs, my feeling is, especially with a right-handed-heavy rotation, that Amir could get an awful lot of work after the starter in these series if things line up,” Price said. “I find his value right now more valuable in our bullpen than our rotation at the moment, especially with the pending addition of Finnegan if everything goes well with his rehab.”

To Garrett’s credit, he’s taken the move to the bullpen in stride, saying he’s just happy to be in the big leagues. And his success from spring has certainly carried over.

Garrett has appeared in five games and 6 2/3 innings this season.Ã‚Â The southpaw has looked fantastic in each outing, allowing only five hits and a walk while striking out eight. His slider has been sharp, getting whiffs on 26.7 percent of all swings against it, and his fastball velocity has returned and then some: 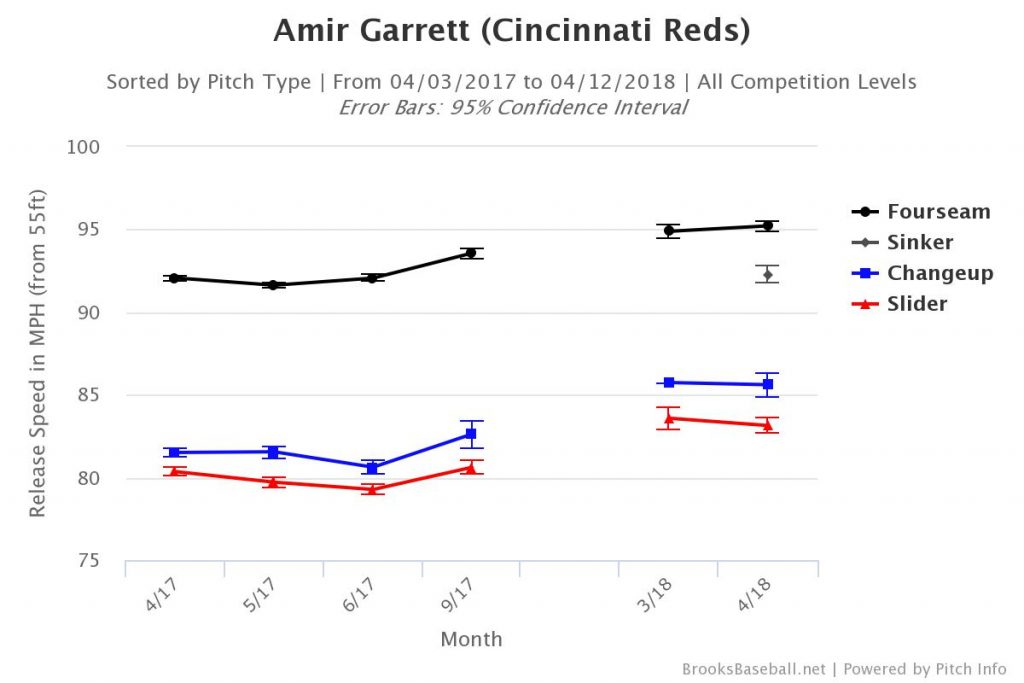 Garrett is averaging 94.5 mph on the four-seamer so far this season. Some of that is obviously an uptick from pitching out of the ‘pen, but getting some of the oomph back on his heater is an encouraging development. He’s also been experimenting with varying his delivery time and using a slide step even when runners aren’t on base, which has also fueled his success. For all intents and purposes, Garrett certainlyÃ‚Â looks like one of the Reds five best pitchers right now (excluding Raisel Iglesias, who is definitely — and sadly — not returning to a starting role).

The whole situation feels similar to what the Reds did with Robert Stephenson and Reed a year ago — although at least the team isn’t giving starter’s innings to players with no future on the team as they did with the likes of Scott Feldman and Bronson Arroyo. Rather than getting valuable developmental time in the rotation, Stephenson stayed in the bullpen until the end of May in 2017, pitching in only 13 games and 24 innings before heading to Triple-A to stretch back out as a starter. Reed pitched in six games out of the ‘pen in April (though he did get one start) before he was sent to the minor leagues to join Louisville’s rotation.

For whatever reason, the Reds feel compelled to put their young arms in the bullpen for short-term help rather than having them continue learning how to pitch effectively as a starter. There’s something to be said for facing major-league competition. However, there’s also the fact that pitchers get hurt all the time, which Reds fans know far too well. Using the top Triple-A starters as relievers in the big-league bullpen means calling up a lesser arm when injuries occur.

At this point, Garrett will have to go down to Triple-A Louisville just to get stretched out to a starter’s innings again, if that’s even in the plans at this point. With the injuries and struggles of the bullpen so far, he’s been one of Price’s two best relievers along with Iglesias, which probably makes it even more unlikely he’ll be removed from a relief role anytime soon.

Long term, the door isn’t shut on Garrett in the rotation. It’s early in the season, and the organization could very well transition him back to starting when Michael Lorenzen, David Hernandez, and Kevin Shackelford return. But the Reds neglecting his development as a starter in favor of a short-term need makes little sense right now with the team still figuring out its future — even with a bullpen currently in shambles.