Recently we discussed the many ways in which Joey Votto is in fact perfect.Ã‚Â I adopted him when he was an anxious rookie, then he earned his way into my tee shirt drawer by being awesome. I am a girl who’s hard to get except when I’m flinging myself at people (fictional characters, animated beings, total strangers with amusing sweatshirts… it’s all happened), but I doubt I would have adopted Votto had he awesomed his way there later in his career. He and I had to have an emotional attachment first, by which I mean I sat fifty yards away from him at the ballpark thinking “I hope he doesn’t screw this up.”

This was a decided intellectual step up from my first favorite Red, Johnny Bench, then in the waning years of his career. The first time I attended a Reds game, I was five years old, and assumed matching age to number dictated when to applaud. This became increasingly frustrating as I got older and still dragged an aging Johnny with me in my heart, because by then I was reading Beverly Cleary books between innings and occasionally asking my father to accompany me from the green seats to the mean streets of the Riverfront concourse, which was often the signal for the Reds to do something exciting. Then there was Todd Benzinger because he was cute. Then Sean Casey because he is Sean Casey.

This phenomenon, I have found, is more pronounced in introverts, and I am the most introverty of them all.Ã‚Â  Once I went to a restaurant to write, but it was a busy morning, and the waitress said, “Would you like a place on the bench at our Community Table?” and I went away instead. I had just been to Confession and didn’t want to haul right back in there to wipe off a homicide. It’s difficult for us introverts to relate to other human beings in real time, so we do so with our serotonin instead.

The great effort applied to paying attention to other people is particularly pronounced where athletics is concerned and our identity is wrapped into the matter: There must be an emotional component. Our Velcro loops manage to smash in just right with our perception of a player’s Velcro hooks, and before we know it we have more Jay Bruce bobbleheads than friends.

How does this phenomenon kick in when teams aren’t a factor? Having lived in Daytona Beach, I used to ask NASCAR fans how they came to back their favorite drivers, and the answer was often something along the lines of, “Well, I like Tony because he BLLLAUUURRRRGGGHHH,” because this person was in Daytona Beach, and what people mostly do in Daytona Beach is vomit in inconvenient places.

So your favorite player probably says a lot more about you than it does about him. Otherwise, how would anyone know how old you were? 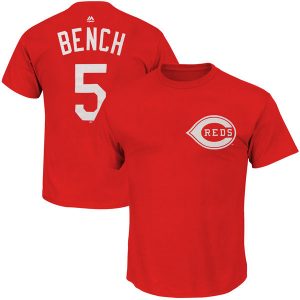