After the Reds locked up Eugenio Suarez for a better part of the next decade (a deal I kinda-sorta predicted in the first installation of this series, btw), I thought itÃ¢â‚¬â„¢d be a while before the Reds extended another player. Devin Mesoraco and Tucker Barnhart both got their extensions, Joey Votto is here for the rest of his career, and the Adam Duvall/Scott Schebler combo, unless they show us something out of their ordinary play in 2018, arenÃ¢â‚¬â„¢t the type of guys you typically see extended. Everyone else that might factor into the next good Reds team – names like Jesse Winker, Luis Castillo, Tyler Mahle, and Nick Senzel – might get a look, but extensions for players with little service time are rare.

And then, I remembered that I was forgetting someone. Somehow, I had forgotten to take into consideration the fact that Billy Hamilton is a prime candidate for the next extension in Cincinnati. Now, itÃ¢â‚¬â„¢s easy to see why I could forget about Hamilton when dreaming of the next great Reds team. HeÃ¢â‚¬â„¢s not good with the bat, and never really has been.

But Billy isnÃ¢â‚¬â„¢t bad at baseball. In fact, since 2013, heÃ¢â‚¬â„¢s accrued over 10 WAR, a feat not easily accomplished by your typical bad baseball player. Add to that the notion that the ownership group is thought to want to make Billy a Red for life, and weÃ¢â‚¬â„¢re looking at more than just smoke to this fire.

But what is he worth? How much does elite defense and base running really go for in the open market? Is this a skillset worth locking down for an extended period of time?

Before we take a look at some comps, letÃ¢â‚¬â„¢s get to the facts:

Fact #1: 2018 is BillyÃ¢â‚¬â„¢s age 27 season. ThatÃ¢â‚¬â„¢s a year older than Suarez, so we know that the Reds are willing and able to lock up a player in what should be the beginning of the middle of their prime.

Fact #2: No matter how you look at it, Billy Hamilton is a well below average hitter. I say hitter, and not offensive player, because his speed makes up for about half of the hole he digs himself in with the bat. His career 71 wRC+ means heÃ¢â‚¬â„¢s almost 30% worse than the average MLB player in the batterÃ¢â‚¬â„¢s box. That translates to roughly -18.1 Fangraphs Offense points, part of the formula Fangraphs uses to calculate WAR. HamiltonÃ¢â‚¬â„¢s Off score was the 9th worst in the MLB in 2017. ThatÃ¢â‚¬â„¢s not good.

Fact #3: No matter how you look at it, Billy Hamilton is a well above average defender, and an elite base runner. Hamilton was worth 1.2 fWAR last season, due to his baserunning (9.5 Fangraphs BsR, 2nd in MLB) and defense (9.6 Fangraphs Def, 12th in MLB). You canÃ¢â‚¬â„¢t just add Off+ BsR + Def to get the total fWAR, but these three scores are a good indicator as to how Billy was only able to accrue 1.2 fWAR last season.

Fact #4: Although it fluctuates, the average price for 1 WAR is around $11M on the open market. So, theoretically, Billy Hamilton was worth just around $13M in 2017.

Since weÃ¢â‚¬â„¢ve got such fresh data for Eugenio Suarez, letÃ¢â‚¬â„¢s look at what he was worth, versus what heÃ¢â‚¬â„¢ll be paid over the next 7 or 8 years. Fangraphs has Suarez listed as having accrued 4.1 WAR in 2017. That means Suarez would have been worth $45.1M last season alone. Of course, no player makes THAT much money each season. And indeed, the contract Suarez signed has an AAV (Average Annual Value) of $11M – almost 25% of what he would be paid if everyone was paid market value.

If the Reds were interested in paying Billy Hamilton at the same 25% rate of market value, weÃ¢â‚¬â„¢re looking at an AAV of $3.25M. Granted, 2017 was BillyÃ¢â‚¬â„¢s worst season as far as fWAR goes, but thems the breaks.

Now, we know the Reds value Hamilton more than this, because the team offered him a $4.6M, 1-year deal to avoid arbitration hearings this offseason. That comes out to roughly 35% of what he should technically make on the open market.

Using this, as well as a few different projection systems for how experts and computers think Billy will play this year, we can probably figure out the Ã¢â‚¬ËœbottomÃ¢â‚¬â„¢ of the range of contract offers he might be willing to sign. Barring a complete breakdown in 2018 (and, of course, barring a development in his hitting that makes him more valuable), hereÃ¢â‚¬â„¢s what the minimum extension might look like: 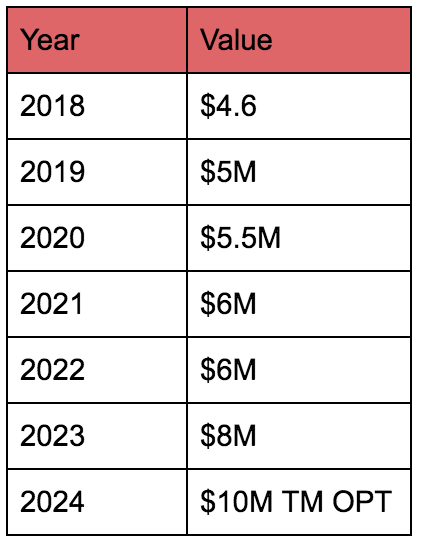 While this contract might not make Billy a Red for life, itÃ¢â‚¬â„¢d lock him up through his prime, and would have him hitting free agency at 32 or 33 years old. The AAV on the contract, before the team option, is just under $6.5M. If youÃ¢â‚¬â„¢re playing along at home, thatÃ¢â‚¬â„¢s roughly 35% of what the projections for 2018 are saying heÃ¢â‚¬â„¢d be worth on the open market.

Now, negotiations between the team and BillyÃ¢â‚¬â„¢s camp will likely drive this number up. The best way to do that is to point to a comparable player whoÃ¢â‚¬â„¢s making more than this contract offers. I present you all with Exhibit A: 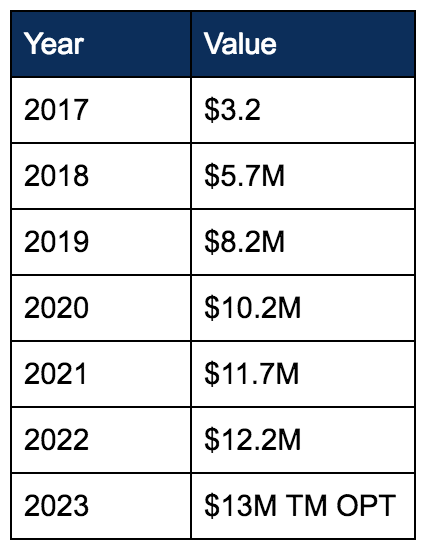 This is the contract the Tampa Bay Rays handed out to Kevin Kiermaier in 2017, featuring a $9.1M AAV. Like most player comps, there are faults to comparing Hamilton and Kiermaier. Kiermaier is a good example of what Billy Hamilton could potentially be, if all of the chips fell right. HeÃ¢â‚¬â„¢s got a Gold Glove award – something that has evaded Hamilton up to this point in his career – and heÃ¢â‚¬â„¢s above average with the bat. Not great by any means, but his career wRC+ of 106 would have Reds fans salivating if Hamilton could pull it off. What Kiermaier has over Billy with the bat, he lacks on the basepaths. Again, Kiermaier is an above average runner, but he doesnÃ¢â‚¬â„¢t sniff Billy Hamilton territory.

Kevin Kiermaier has been worth around 4 WAR a season, including a 5.1 WAR 2015 season which cemented him as the best defender in baseball. He lost a step defensively in 2017, at least according to the metrics, but was still a 3 WAR player thanks to his 112 wRC+. Oh, what could be.

Not only are the players somewhat similar, but the clubs are somewhat similar as well. Tampa Bay, like Cincinnati, is a small market team that likes to get creative with contracts. You can argue that the Ã¢â‚¬Ëœlikes to get creativeÃ¢â‚¬â„¢ above should read Ã¢â‚¬Ëœneeds to get creativeÃ¢â‚¬â„¢, but thatÃ¢â‚¬â„¢s a conversation for another day. The Eugenio Suarez contract is a classic Tampa Bay contract. Spoiler alert: in the next edition of Contracts for the New Core, weÃ¢â‚¬â„¢ll be discussing Evan LongoriaÃ¢â‚¬â„¢s contract, and how that relates to the Reds.

So, letÃ¢â‚¬â„¢s say Billy comes back to the Reds, and wants his contract to be a little closer to KiermaierÃ¢â‚¬â„¢s. Without a Gold Glove or any sort of bat to speak of, that becomes a tough ask for the Reds. However, Billy is quickly becoming a fan favorite, and has already proven to be a favorite in-house. Without budging too much, hereÃ¢â‚¬â„¢s the high end of what IÃ¢â‚¬â„¢d find acceptable in a contract offer if I were in the Reds front office: 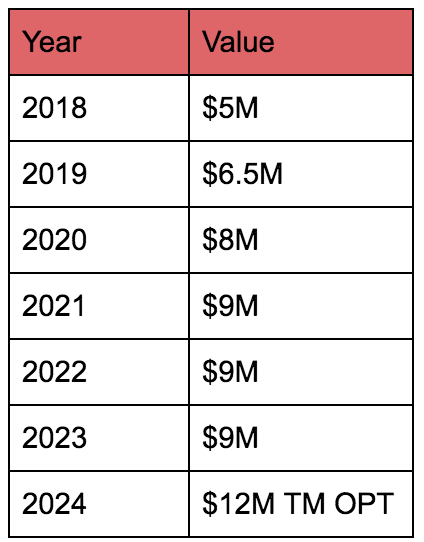 This contract is set up similarly to the Suarez contract, but obviously with less money. The $8.3M AAV is less than Kiermaier, but probably a little rich for the production Billy has been able to accomplish up to this point. Again, a lot of the bloat in the contract is due to Billy being one of the faces of the club, someone who Ã¢â‚¬Å“puts butts in seatsÃ¢â‚¬Â, and is a personal favorite of the ownership group. I think if 2018 is more of the same from Hamilton, and his camp is trying to bargain for more money than is provided in this contract, the Front Office has to seriously consider cutting ties.

At the same time, if 2018 is the year Billy finally shows he can be at least competent with a bat in his hands, you sign him to this contract in a heartbeat. Even the 100 wRC+ version of Billy Hamilton is insanely valuable, given the same level of base running and defense weÃ¢â‚¬â„¢ve seen in the past. ThatÃ¢â‚¬â„¢s exactly the kind of player a small market team needs to extend, and IÃ¢â‚¬â„¢d be perfectly comfortable signing him to the contract above if he can show some progress this season.

What do you think? Too much? Not enough? LetÃ¢â‚¬â„¢s hear it in the comments.