If you are only following my work here at Redleg Nation, you’re missing out. While I love Redleg Nation and the crew we have here, every single day I’m writing about the Cincinnati Reds farm system over at RedsMinorLeagues.com. While I was out in Goodyear covering the minor league side of spring training, I had a chance to sit down with Reds General Manager Dick Williams. That article first went out to those who support my work via Patreon (shameless self plug here, but every little bit helps keeping the coverage provided going). A couple of days later it came out for everyone and you can check it out here. Williams touched on several topics, some of which may interest you, including John Farrell’s role in the organization moving forward, some information on their Sports Science Initiatives program, and how they could spend internationally in the future. 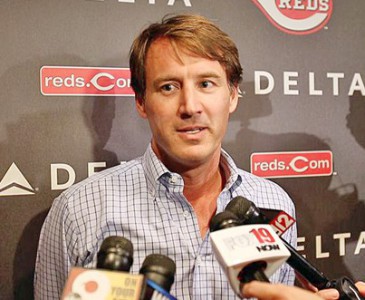 The Minor League season begins on Thursday. Sort of. Not every team kicks things off on Thursday. The Dayton Dragons, Daytona Tortugas, and Pensacola Blue Wahoos all begin on Thursday. Daytona actually will play a scrimmage game against Embry Riddle on Tuesday evening. The Louisville Bats, however, won’t begin their season until Friday. Rosters won’t be official until gameday, but the preliminary rosters (which will most likely be the same when the games begin – but the big league roster could alter that if players are called up before then) should begin coming out early this week.

We already know where the Top 10 prospects are going to begin their seasons.

I’ve been publishing videos, almost daily, over on Youtube that I got out in spring training. That includes video of a start by Hunter Greene, if you missed that. But, one guy that I wanted to talk about today is Stuart Fairchild.

The Reds selected him in the 2nd round last season out of Wake Forest. He’s an intriguing player. Depending on who you ask, he may be the best center fielder on the defensive side of things in the farm system. There’s plus speed in there that he can use in the field and on the bases.

But, where things get the most interesting is in the batters box. There’s some power potential in there for Stuart Fairchild. He’s got some bat speed, and there’s some strength there. But his swing is currently geared toward making contact rather than hitting for power. That’s not to say he doesn’t hit the ball hard, but that his swing doesn’t generate tons of loft on the baseball.

In the week that I was in Arizona, and I watched multiple games each day, Fairchild had two of the hardest hit baseballs that I saw. His pitch recognition and plate discipline also stood out. That’s not terribly surprising – he only struck out 14.9% of the time he stepped to the plate in the 2017 season in Billings. It’s an interesting profile for the outfielder, and one that will be intriguing to follow along his rise through the system, particularly as it relates to developing his power.

Another guy that seems destined for the Dayton Dragons club this year, Jose Garcia, was all kinds of impressive in Goodyear. The Reds paid $10M to sign him last June (Garcia got half, while MLB got half as a penalty – you know, because that makes sense). With that kind of investment, it’s clearly unsurprising that he was able to show off tools that impressed me. That organization saw them, too, and paid him accordingly.

Still, there was no track record of Cuban professional performance that we could look back on. And while he was trying to get his paperwork taken care of after signing, it meant he didn’t play games last year, either (he did participate in baseball activities after signing – but wasn’t able to get into games because of how things worked out with what he was, and wasn’t legally allowed to do). Essentially, he’s been a big unknown on the field. Being able to get eyes on him, facing live pitching that was attempting to get him out, he looked like he had a good understanding of the strikezone, showed a nice, quick swing, and for my money, was probably the best player on the field in the three games that I saw him play.

That’s all I have for this week. Next week in this column we will have regular season Minor League Baseball to talk about. I can’t speak for you guys, but I can’t wait.