Editor: This is the second installment of a season-long series by our resident Reds historian, John Ring. (Check out the first installment here.) The series will examine the 50th anniversary of the 1968 Cincinnati Reds, a team on the brink (of huge success) playing during a year that it seemed the world was on the brink. Enjoy!

Opening Day means a lot to most baseball fans. It means everything to Cincinnati Reds fans.

Opening Day at Wrigley Field is baseball. Opening Day in St. Louis means the Clydesdales and baseball and a cold Busch.

Opening Day in Cincinnati is a holiday. ItÃ¢â‚¬â„¢s a festival, a parade, a celebration.

ThatÃ¢â‚¬â„¢s changed a bit over the years. Cincinnati used to have the market on Opening Day cornered. The first pitch of the season was always thrown at The Palace of the Fans, Crosley Field or Riverfront Stadium. A few years ago it was thrown in Japan.

Unfortunately, Opening Day has had to be postponed over the years, due to weather or work stoppages. In 1968, it was postponed for another reason.

Opening Day in 1968 was scheduled for April 9 at Crosley Field against the Chicago Cubs. But on April 4, four hundred and eighty nine miles away in Memphis, Martin Luther King stepped out on the balcony of his room at the Lorraine Motel. King was in Memphis to support striking African-American city sanitation workers He had an event to attend that night and was talking with colleagues when a Ã¢â‚¬Å“shot rang out in the Memphis sky.Ã¢â‚¬Â

It came from a 30-06 rifle and crushed into KingÃ¢â‚¬â„¢s right cheek. It broke his jaw, traveled down the spinal cord, severing the jugular vein and major arteries before lodging in the shoulder. King was pronounced dead an hour later at St. JosephÃ¢â‚¬â„¢s Hospital at 7:05pm. As word spread of the assassination of the civil rights leader, unrest and anger in black communities peaked and led to rioting.

It affected 110 major cities in the United States. For the second time in two years, riots happened in the Cincinnati neighborhood of Avondale. One of the few peaceful cities was Indianapolis, mostly because of an impromptu speech by Senator Robert Kennedy on the back of a flatbed truck in a predominantly African-American neighborhood. Kennedy was campaigning in the Indiana Democratic Primary for President. The crowd had no idea King had been killed. KennedyÃ¢â‚¬â„¢s aides urged him to cancel. So RFK not only broke the news to the audience but spoke to their hearts and minds as well.

KingÃ¢â‚¬â„¢s funeral was scheduled for April 9th in Atlanta– which was also Opening Day. President Johnson declared it a national day of mourning. William Eckert was the baseball commissioner at that time. While he was famous for being a General in the Air Force, Eckert was most known for his indecisiveness. He simply couldnÃ¢â‚¬â„¢t make a tough decision.

Eckert held true to form on the issue of if baseball should be played on Opening Day in 1968. He left it up to the home teams. (Pete Rozelle was faced with a similar situation on November 22, 1963, when President Kennedy was assassinated in Dallas. Rozelle, the NFL Commissioner at that time, gave the green light for NFL teams to play on Sunday and paid dearly for it. Americans were in a deep state of shock that weekend and didnÃ¢â‚¬â„¢t like the call. Ã¢â‚¬Å“It was the worst decision of my life,Ã¢â‚¬Â Rozelle admitted years later.)

Cincinnati and the Washington Senators (now the Texas Rangers) were hosting Opening Days on April 9. Both teams decided quickly not to play ball that day. But Houston, which was hosting Pittsburgh the same day, decided to play.

The Pirates balked, led by Roberto Clemente, who had met King in Puerto Rico after the 1964 season. Clemente and King formed a strong friendship and the Pirates rightfielder spoke out against playing and was quickly backed by his teamÃ¢â‚¬â€ including white, Hispanic and black players.

To no oneÃ¢â‚¬â„¢s surprise, Eckert sat this one out. His policy was that Houston was the home team, so it was their call. But Pirates General Manager Joe L. Brown reached out to his Houston counterpart and an agreement was finally reached. The game was postponed until April 10.

Meanwhile in Cincinnati, there were big concerns, even with canceling Opening Day. Seventy fires had been set in Avondale, with one dead and hundreds arrested. The city was on a curfew.

The Cubs and Reds played ball on April 10. An original ban on the selling of alcohol was lifted the morning of the game but there was a strong police presence at Crosley that day. Tied 1-1 in the 5th, the Reds loaded the bases against Cubs starter Joe Niekro. Vada Pinson smacked a 2-run double and then Tony Perez crushed a three-run homer to give Cincinnati a 6-1 lead. 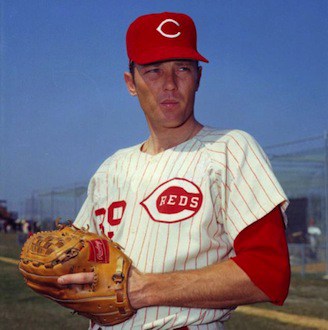 Starting pitcher Milt Pappas couldn’t hold the lead. The Cubs knocked him out in the 6th
but George Culver came in to strike out Dick Nen to end the threat and the Reds clung to a 6-4
lead. Ã¢â‚¬Å“I played with Dick in the minor leagues and he was a pretty good player,Ã¢â‚¬Â said Culver. Ã¢â‚¬Å“He just wasn’t able to do it in the big leagues.Ã¢â‚¬Â

Ã¢â‚¬Å“Opening Day of 1968 was my first game as a Red so I was really nervous when [Manager] Dave Bristol put me in the game,” said Culver. “It was a big thrill for me. I pitched well that day and I was able to impress my teammates and the fans in Cincinnati. It helped establish myself with Bristol and the team.

Ã¢â‚¬Å“I got into a jam in the 8th inning but I got Ernie Banks to ground into a double play. I still remember him hitting the ball to Leo Cardenas. The Cubs were a team on the rise and they had some good hitters– Ron Santo, Banks, Billy Williams, Randy Hundley… So I remember that game very well.Ã¢â‚¬Â

The game went off without a hitch, except for a 43-minute rain delay in the 4th inning. Ã¢â‚¬Å“I remember the curfew in Cincinnati when we got back from spring training. We were in Birmingham when we found out about the assassination. Those were some scary times,Ã¢â‚¬Â said Culver.

The Opening Day win gave the Reds a 1-0 record. They were considered a good team, but not a contending team. The Cardinals were defending World Champions and their ace, Bob Gibson, was ready for the challenge.

Ã¢â‚¬Å“Gibson hated us,Ã¢â‚¬Â said Culver. Ã¢â‚¬Å“I mean, he hated everybody. But after the brawl we had in 1967 when he hit Perez, he really hated us.Ã¢â‚¬Â

The ’68 pennant race would be heated. So would the streets and college campuses in American cities.

[The quotes from George Culver are from an interview he gave to the author.]