The Reds got the misfortune of facing the Washington Nationals to start 2018, and three starters who finished in the top six a season ago in the National League Cy Young voting.Ã‚Â  It does not make it much easier to swallow getting swept to start the year, but it is important to consider that fact. The Reds have yet to take a lead in 27 innings in 2018, and the small amount of optimism that surrounded this team is starting to fade.

The Reds will face Tyler Chatwood tomorrow. He had a 4.69 ERA a season ago. 159 games still to go. 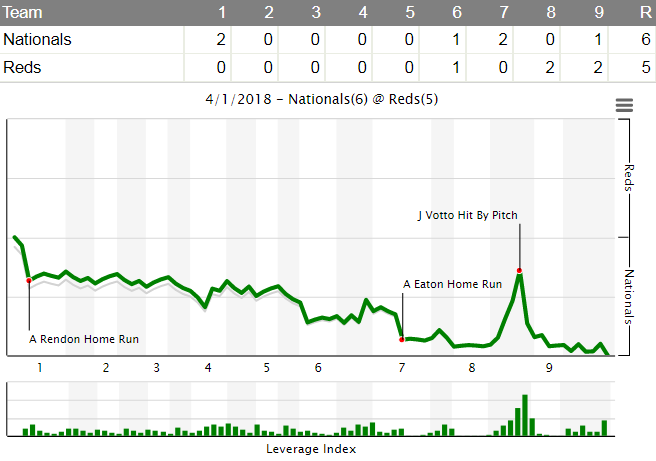 According to FangraphsÃ‚Â WPA statisticÃ‚Â (winning percentage added), the most important play of the game was Adam Duvall grounding into a double play with no outs and the bases loaded in the 8th inning. The Reds scored one run, and still trail 5-3.Ã‚Â That play decreased the Reds chances of winning by 22.4% (from 36.0% to 13.5%).

Eaton absolutely destroyed the Reds in this series. He went 8 for 13 with 2 homers.Ã‚Â Bryce HarperÃ‚Â also had 2 homers today, so you could have put him here if you really want to.

Sal RomanoÃ‚Â surrendered a two run bomb to the second batter of the game, and ended up throwingÃ‚Â 34 pitches in the first inning. He settled down pretty well after that, and recorded a quality start. After seeing what the Nationals are capable of yesterday, 3 runs over 6.0 innings isn’t all that bad.

Phillip GosselinÃ‚Â hit a 2-run home run off Nationals closer Sean Doolittle. Gosselin had been double-switched with Gennett earlier in the game. He had a grand total of 6 career home runs in 509 at-bats.

When you have as a bad of a weekend as the Reds did, sometimes you just need to marvel atÃ‚Â Joey Votto.

i swear joey votto's swing is the most beautiful thing on the planet pic.twitter.com/xnIJNFDLfG

Jose PerazaÃ‚Â has started the season 0 for 12 with 5 strikeouts. He made 13 outs in 12 trips to the plate (hat tip to Patrick Jeter). Senzel can not get here soon enough.

Yovani GallardoÃ‚Â gave up a two run bomb in his Reds debut just as they had cut the Nationals lead to 3-1.

Raisel IglesiasÃ‚Â gave up a solo home run to Bryce Harper. It didn’t seem like a big deal at the time, but it ended up being the difference in the game.

The Reds offense just might be really terrible vs LHP. Votto and Suarez are probably the only good hitters vs LHP, although Votto is a little less powerful against southpaws. This could be something that could really be an issue until Nick Senzel establishes himself in the lineup.

I couldn’t be more thrilled that the Reds are finally embracing some platoons. However,Ã‚Â Billy HamiltonÃ¢â‚¬â„¢s OBP vs LHP over the last two years is .252, and his OBP vs RHP is .330. I donÃ¢â‚¬â„¢t exactly get why you bench him yesterday vs RHP and start him today vs LHP. Hamilton made the final out of the game with the Reds down 1 run against…..a left-handed pitcher.