Can you smell it? Can you smell the fresh cut grass, the hot dogs sizzling on their grills, the dirt rubbing against the newly minted leather? Can you hear the mowers whirring, the organ starting up, the smack of the ball against the bullpen catcherÃ¢â‚¬â„¢s mitt? Or can you just feel it in your core, no matter where you are, that sunny spring days are coming to Cincinnati and that BASEBALL IS BACK, BABY.

If you followed this column at all last year, you know it was filled with random games and gimmicks and probably way too many tweets. Well this year will be a little different because your Regularly Scheduled Rain Delay isnÃ¢â‚¬â„¢t interested in distracting from the on-field product, but amplifying it this time around. The Reds are finally Ã¢â‚¬â€ FINALLY Ã‚Â Ã¢â‚¬â€ worth devoting hours of energy and attention to again, and that must be recognized.

All of that being said, this first issue, Volume 1 of the 2018 Regularly Scheduled Rain Delay if you will, will adhere closely to the columnÃ¢â‚¬â„¢s roots. There will be no deep-diving analysis, no player profiles, no righteous indignation at the front office for doing X when they shouldÃ¢â‚¬â„¢ve done Y and how could they ever be so Z?!?!

No, there will be none of that. Because here, in this first volume of 2018, I will attempt to draw a roadmap for the rest of the RedsÃ¢â‚¬â„¢ season, predicting the most unpredictable sport for the best team in the whole dang world.

Well thatÃ¢â‚¬â„¢s it everyone. You donÃ¢â‚¬â„¢t even need to watch the games anymore; youÃ¢â‚¬â„¢ve got the scoop. Happy you didnÃ¢â‚¬â„¢t drop all that money on MLB.tv now, right?

Odds are, most of these predictions will be wrong. I mean, just look at my March Madness bracket: Virginia was going to win it all! (Sorry Chad. WeÃ¢â‚¬â„¢re all really, very, truly sorry.) But itÃ¢â‚¬â„¢s a new season and nothing matters anyway because Reds baseball is back and the Cardinals still have yet to win a game.

So I wonÃ¢â‚¬â„¢t be doing the Kangaroo Court Fees segment from last year again because this is a season of optimism and fining all of these new guys for trying their best seems Scrooge-esque. Also, I actually accomplished most of the fines I put on myself in the last Rain Delay column, so setting myself up for more goals sounds like just too much work.

What will be sticking around though is this Scouting Report section, where I forcibly make you all care about both my dynasty fantasy team and my narcissistic quest to be the most viewed Redleg Nation author.

Some updates and refreshers:

Last season, my fantasy team Ã¢â‚¬â€ Kangaroo Court Fees Ã¢â‚¬â€ went 4-17 and finished last in the league. While that makes it sound like my team is in a sorry state, which it is, it also means that I landed Shohei Ohtani in our offseason waiver draft. ItÃ¢â‚¬â„¢s not much, but the Japanese Babe Ruth has to be a start right? Anyway, hereÃ¢â‚¬â„¢s my current team going into year 3 of a five-year dynasty league, suggestions appreciated: 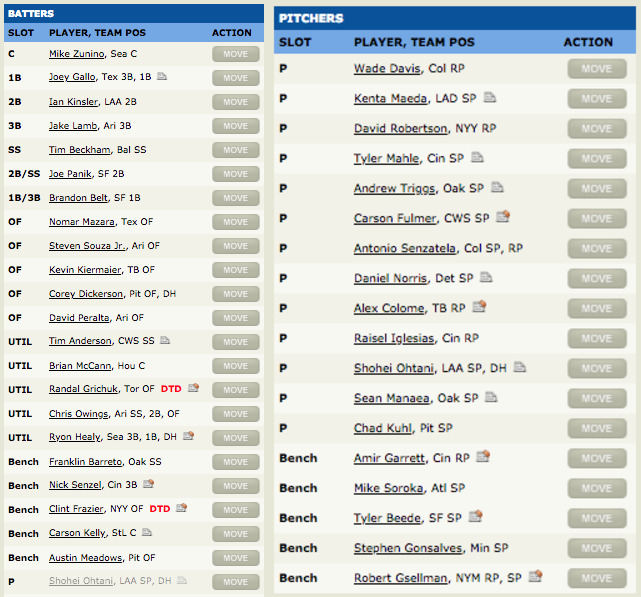 As for authorial views, I finished sixth at seasonÃ¢â‚¬â„¢s end, falling 7,000 views behind Matt Wilkes, and many, many views behind Chad, Steve, Nick, and Jason. This year, I will be coming back with a vengeance, writing content that you people actually want, and still probably finishing five or six. What can I say, I know my place. The current standings: 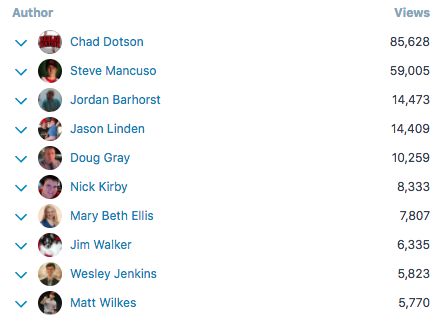 Well….I’ve got a lot of work to do. BUT, get used to looking up Matt Wilkes.

If you have any predictions of your own or any future column suggestions, feel free to let me know in the comments or on Twitter. IÃ¢â‚¬â„¢m a man of a people now. Narcissistic, maybe, but of the people. You lovely, adoring internet people.