This is our first in a series of hitting and pitching columns this season. As you can see, I’ll be handling the pitching, while Matt Habel will cover the hitters. Our plan is to alternate every week, and we’re starting this week with our first edition of On the Mound with Matt. Stay tuned next week for the debut of At-Bat with Matt!

The aftermath of a rebuild typically leaves teams with few veteran players. The Cincinnati Reds are no exception. On the offensive side of the ball, only Joey Votto remains from the core of teams past. On the pitching staff, only Homer Bailey is left.

These two players exemplify, better than almost any others in the league, what can go right when a team hands out a long-term contract extension and what can go horribly wrong. Votto, of course, has maintained MVP-caliber play well into his 30s. Bailey, on the other hand, has struggled to stay on the mound and hasn’t been effective when healthy enough to pitch.

When the Reds signed Bailey to a contract extension, the right-hander was coming off his best season in 2013. He made 30+ starts and pitched 200+ innings for the second straight year while putting up career-highs in ERA (3.49), FIP (3.31), xFIP (3.34), SIERA (3.32), strikeout rate (23.4%), and fWAR (4.1). He even threw his second career no-hitter on July 2. The future looked bright, as the 27-year-old was finally living up to his sky-high prospect billing. Bailey was entering his prime, and the Reds made the choice to extend him over Mike Leake, Johnny Cueto — who struggled to stay healthy in 2013 — and the volatile Mat Latos. The deal had its critics at the time, but it made plenty of sense when looking at all the factors involved.

Here’s what Steve Mancuso wrote shortly after the extension was announced:

“Barring a serious setback, the Bailey extension gives the Reds a top-of-the-line starting pitcher for this year and five more. You can debate the termÃ‚Â ace, but Homer Bailey has clearly emerged as one of the best 25 pitchers in baseball. HeÃ¢â‚¬â„¢s a cornerstone like any successful franchise needs.”

The 2014 campaign, while not quite as impressive as the previous year, was still a strong one for Bailey, as he posted a 3.71 ERA and 3.53 xFIP through 23 starts. Then, his career started to go downhill — and the snowball grew quickly. He was shut down in August due to arm fatigue and ultimately had surgery to repair his flexor mass. The following May, he had Tommy John surgery. Since the 2014 season, Bailey has pitched in only 26 games and posted a 6.39 ERA (4.70 xFIP).

After making 18 starts in 2017, the hope is Bailey will be healthy in 2018 and provide a needed veteran presence in the Reds’ rotation. He won’t live up to his $105 million contract at this point, but any production from the right-hander would be welcome. He’s likely the Opening Day starter, but can he realistically be an effective major-league pitcher again?

In his brief time on the mound in 2016, Bailey still showed signs he could return to his former self. The ERA wasn’t exciting (6.65), but his strikeout (24.3 K%) and walk (6.3 BB%) rates in 23 innings were promising. However, Bailey had another surgery to remove bone spurs in his elbow in February 2017, and his subsequent performance reflected a pitcher who had gone under the knife three times and barely faced a big-league hitter in the previous three years.

In particular, his fastball — once his best pitch — became one of the worst offerings in the league, rated as the 29th-worst heater per FanGraphs Pitch Value among 149 players with 90 or more innings. Most notably, his fastball velocity dipped to an average of 93.5 mph from 94.9 mph in both 2013 and ’14. That’s not a huge surprise after three elbow surgeries, but it made things more difficult for the right-hander. At his best, Bailey was able to elevate his fastball to get hitters out, as he did time and time again in his second no-hitter.

Without that extra oomph, though, Bailey struggles to get his fastball by hitters when he leaves it up in the zone now. As a result, he’s also trying it with less frequency. Take a look at his whiff rate on his fastball in 2013: 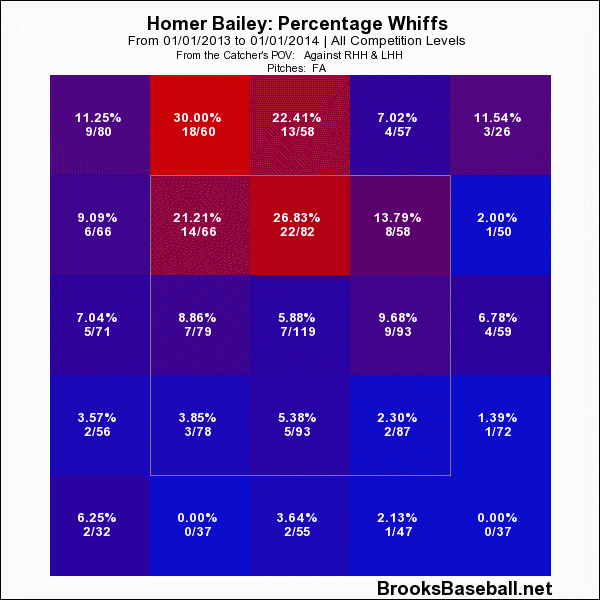 Now compare that with last year and note the obvious difference up in the zone: 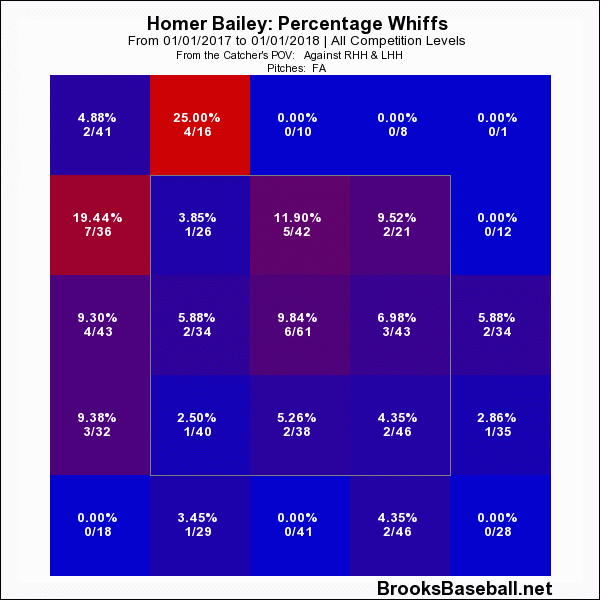 A 93 mph fastball is enough to get hitters out, and he still touched 97 at times in 2018. But he’s not hitting the upper 90s as much as he used to, and thus isn’t blowing by as many hitters. Instead, fastball command has become more important than ever for Bailey, and it’s something he struggled with tremendously in 2017. Here’s a look at his fastball zone profiles from 2013 and 2017 side-by-side: 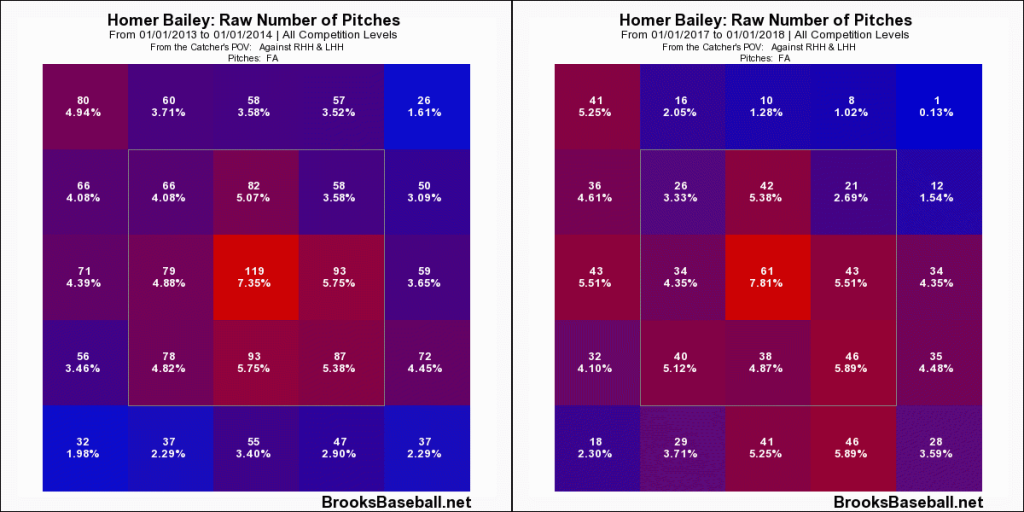 Overall, Bailey did a much better job of painting the corners during his peak. Note the lack of purple and red colors outside of the strike zone compared to 2017. Bailey really struggled to hit the edges of the plate last season, particularly on his arm side and low in the zone. While he was able to hit the bottom corners at a higher percentage than in 2013 (likely because he’s throwing lower in the zone due to decreased velocity), he also missed the strike zone low far more often than he did in his prime. When he did get the fastball over the plate, it was right down the middle at a higher rate and he didn’t have his higher velocity to make up for the mistakes. As a result, hitters obliterated Bailey’s fastball for a .347/.424/.545 slash line, .412 wOBA, and 158 wRC+ in 2017.

If he’s going to perform better, it all starts with fastball location, especially with off-speed pitches that don’t have the same movement they used to.

(Note: The lower the zMov, the more vertical drop the pitch has. A higher zMov indicates the pitch stayed relatively straight. Horizontal movement, or xMov, is a bit different. If the number is negative, that means the pitch moves toward a right-handed hitter; a positive number means it moves away.)

Bailey lost a bit of downward movement on the slider and sinker, which left him more susceptible to hanging his pitches. As you’d expect, that resulted in fewer groundballs on both offerings than his career averages (47.5% vs. a career 49.6% on the slider, 41.7% vs. 51.5% on the sinker) and hitters squared each one up with more frequency (.513 slugging percentage vs. slider, .440 vs sinker). A less effective slider is particularly damaging to Bailey, as it was previously his second-best out pitch (career 79 wRC+ against) behind the splitter. He also used his curveball less than ever, which may not be a bad thing as it’s typically been his worst pitch. Although he got hitters to swing at the hook outside of the zone more often (33.3% vs. 29.5% for his career), they still crushed it when making contact (.364 ISO, .636 SLG).

Fortunately, it wasn’t all bad news for Bailey. His splitter continued to be an effective putaway pitch (18.6% swinging strike rate, 52.1% groundball rate, 53 wRC+ against) despite getting less drop. Hitters also put up a .346 average against him on balls in play. An uptick in line drive percentage didn’t help Bailey in this regard (27.0% vs. 21.3% for his career), but he didn’t allow hard contact at horrific rate, either (86.7 mph vs. a league average for starters at 86.8 mph). That BABIP will likely come down in 2018. He also suffered from an abnormally low strand rate of 64.8%. In most cases, pitchers will sit around 72%, meaning some positive regression may come Bailey’s direction in 2018. Moreover, he did a nice job of shaking off the rust a bitÃ‚Â in September (4.46 xFIP, 18.9 K%, 8.2 BB%), leaving some hope for the future.

Of course, there’s also the caveat that he was coming off of three elbow surgeries. While he may never regain his former command or pitch movement, no hurler is exactly the same after so many operations, especially not right away. In general, pitchers perform better after Tommy John surgery, and some get back to their old selves relatively quickly (e.g., Lance Lynn, Stephen Strasburg, Yu Darvish). Others take a season or two, and some never return to the same form — although this latter group has shrunk considerably over the years as the surgery has become more routine and reliable. However, three arm procedures is a whole different animal, and Bailey could simply need more time to regain some semblance of his former self on the mound.

Bailey may still be capable of producing for the Reds during the last two years of his contract — and he’s appeared healthy in spring training despite poor results. But to shake off a rough 2017 and become a key contributor again, his command has to improve significantly. A return to nearly 200 strikeouts in a season is probably out of the question. However, he still has decent velocity and a solid secondary offering (splitter), providing at least some reason for optimism if he can set batters up with the heater and mix in even an average third pitch.

Many pitchers have “rebuilt” themselves with diminished stuff in their 30s; let’s see if Bailey can be the latest one to do so.