I’ve been saying for the last few months that Jesse Winker needs to be leading off for the Reds, and he needs to get at least 550 at-bats in the 2018 season. Nothing I’ve seen from him either last year (.298/.375/.529) or this spring (.400/.450/.629, with a mammoth home run) has caused me to change my mind about this. It seems like the most obvious decision in the world for a team that is approaching what we hope is the end of a rebuilding process.

But then, there’s this little nugget, reported by Keith Jenkins in our daily newspaper, the Cincinnati Enquirer:

Schebler started 115 games in right field last season, but Price said Schebler likely will see some time in center as part of a four-man rotation in the outfield.

“Right now, we’ll get everybody regular at-bats,” Price said. “The guys that have been there Ã¢â‚¬â€œ Schebler, Duvall and Hamilton Ã¢â‚¬â€œ they’re regular Big Leaguers to me.”

That has to be a typo or a misunderstanding or something, right? Manager Bryan Price has been saying all spring that he expects to rotate four outfielders, but now Phillip Ervin is in that mix for the first time?

Sure, this was posted nearly two days ago, and it hasn’t been corrected yet, but I’m just going to assume that this is a mistake and ignore it. It’s the only way to keep my sanity.

(I’m also posting a screenshot, since I am going to assume the Enquirer will fix this and I want to ensure you, dear reader, that I’m not completely making up everything that’s written and published here at the Nation.) 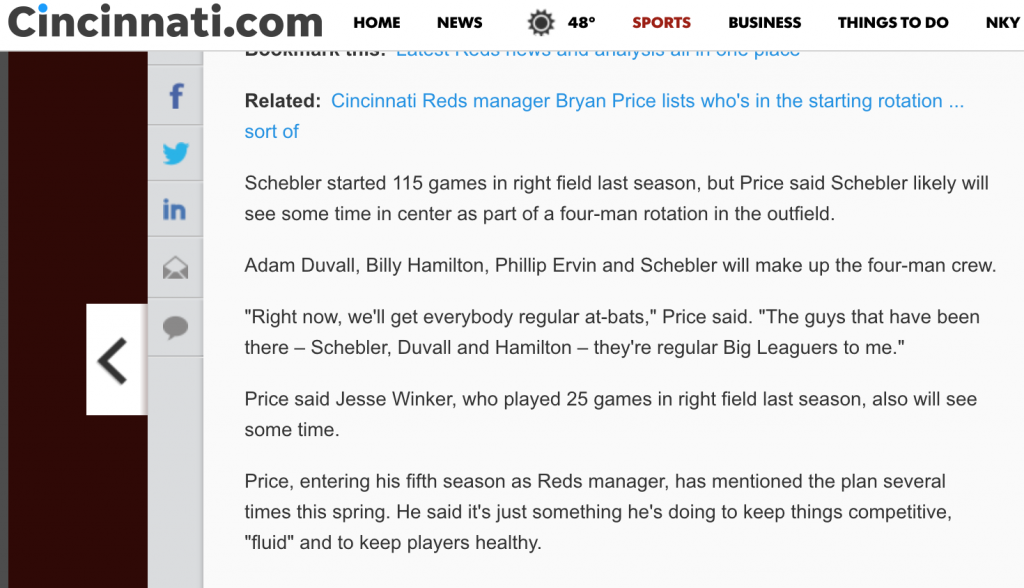 UPDATE: Fay has clarified, via Twitter, though the actual report on their site has yet to be corrected, it appears.

The four-man rotation is Duvall, Hamilton, Schebler and Winker. Ervin is a candidate for the 5th spot. https://t.co/ggW5Swx6rD