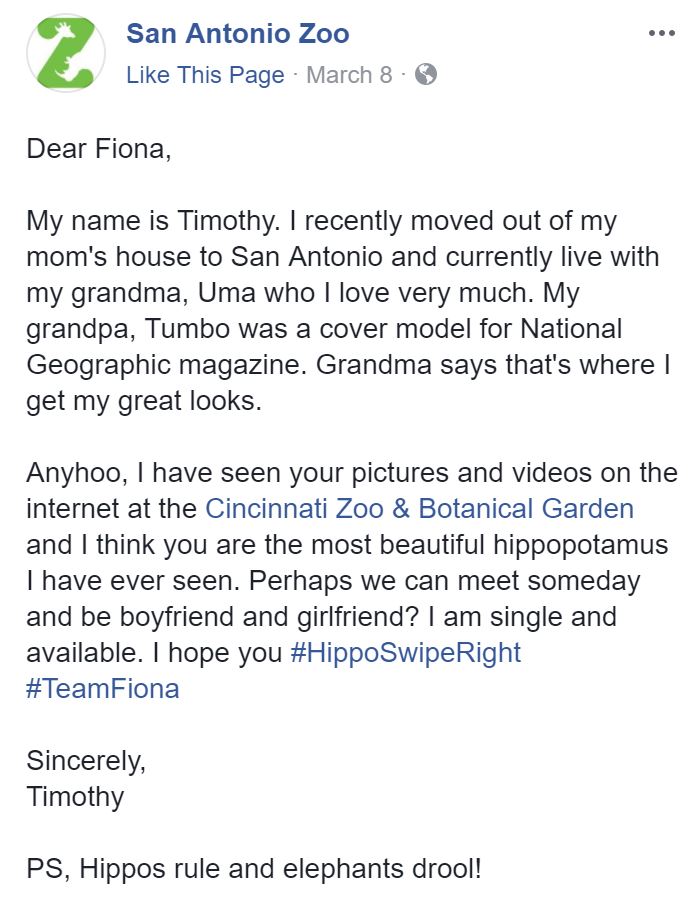 I don’t even know where to start with this. Yes I do. I will begin by putting my foot down. Our Fiona is too young to date. No boys until she’s five.

Even were she actually old enough to start tramping around every zoo with a hippo enclosure, I don’t know that I’d recommend this Timothy character. His comma use is execrable, his name-dropping vulgar. And he’s said nothing at all about Fiona’s goals or dreams or autonomy. She is utterly objectified, and he ends it all by slamming elephants, none of which, I am quite sure, have done anything at all to him to warrant such hostility.

Timothy is engaging in what scientists call status formation through bonding, or, as we one-Psych 101 graduates call it, “acting like a douchebag to others in an attempt to en-cool oneself in an attempt to get the chick.” This may be expected from hippie man-bun wearing hippos from the moral wasteland that is California, and is precisely the type of shyster we should be on guard against.

But we can’t protect our baby girl forever.

Fiona’s reply, appropriately, condemns Timothy to the friend zone. It is a sensible response, quelling yet polite, but I consider this whole business a near miss. How much longer before she begins to develop daddy issues?

This has been a concern of mine ever since Fiona’s father, Henry, passed on. She is a famous young lady without a father figure in her formative years, and unless we want to see her on the pole by the time she’s three, we need to get Fiona a stable family unit if only for the awesome tee shirts it will generate. We already have the likes of Timothy after her ice cream and beer. Now we’ve got this new relative of Fiona and Bibi’s banging around Orlando, and who knows what kind of Florida Man lunacy this kid will send our way.

Mama Bibi is a tough broad who can certainly raise a celebrity on her own. She don’t need no man. But all things being equal, it’s nice to have a man around the cove.

It bears mentioning that the same week we were all going awwwww over the whole Timothy-Fiona courtship, the other side of the social media sword has been darkly glinting. Just a few days ago, the Internet found a reason to be hysterical over a primate in a zoo again. This should sound familiar, Tri-Staters.

We love Fiona because she was a surprise, an adorable, ramp-climbing, unifying surprise, without agenda and without demand. She was supposed to be born at a certain point and she wasn’t; she was supposed to die and she didn’t.  The entire Harambe situation was a surprise as well, a bad one that forced the Cincinnati Zoo to shut down its social media feeds for a time. (Unless you live your life in memes. Then it’s the best gift since Rolling Baby.)

Having lived both types of surprise within a few months–first the bad, then the good–the zoo staff permitted us to take ownership of Fiona because we demanded access to the miracle-generating hope she represents. I didn’t even particularly follow Fiona’s story in her infancy, but I wound up watching the live broadcast of her care staff singing “Happy Birthday” to her on her first birthday, sniffling throughout, because odds were great that she wouldn’t see any birthdays at all.

If you think we Cincinnatians are dialed in on the love life of a hippopotamus still four years away from sexual maturity, you should meet our  149-year-old ball club, with whom we arise and slumber 162 games a year. And already in spring training we have seen surprises–the bad kind, the double-wounded pitcher kind. We don’t know what we’ll see next. In the vein of staring gratefully at Joey Votto’s side of the train, we can only hope it will involve party hats and giant cakes made of watermelon.