Check out the previous installments of our Redleg Nation 2018 Season Preview series:

The Reds bullpen had a strange 2017 season. They started off strong, and by the end of the first half they ranked 10th in the MLB with a 3.97 ERA. The second half featured implosions from now former Reds Drew Storen and Blake Wood, and double-digit innings from Asher Woj-whatever, Tim Adleman, and Ariel Hernandez. The Reds relievers had a 5.52 ERA in the second half (2nd worst in the MLB), and ended the entire season with a 4.65 ERA, the 4th worst in the MLB.

The Reds have made a couple of moves this off-season, and their younger guys have another year of experience under their belt. I am sure the Reds front office is hoping that is enough to have a reliable season from the pen.

Raisel Iglesias ranks 8th among qualifying MLB relievers since the start of 2016 in ERA (2.29)

David Hernandez was signed this off-season to a two-year deal worth $5 million. He is projected by ZiPS to post a 3.70 ERA. He has been a high strikeout guy with a good fastball throughout his career. He should really help the Reds bullpen. 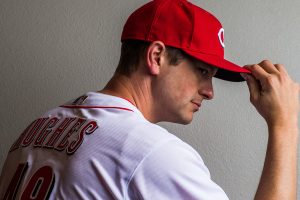 Jared Hughes was signed this off-season to a two-year deal worth $4.5 million. Hughes is projected to post a 3.83 ERA. Hughes isn’t going to strikeout guys at the rate of Hernandez, but he induces a lot of ground balls. He should be another nice, but quiet add to bolster the Reds pen.

Wandy Peralta is not liked by ZiPS. It has him projected to post a 4.39 ERA. Peralta is coming off a nice 2017 season, where he posted a 3.76 ERA. His 4.16 FIP made some regression likely, but he has a good chance to be a solid left-handed option in the Reds bullpen. 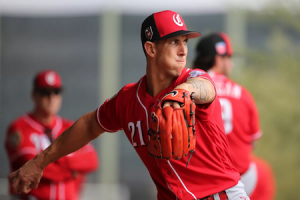 Michael Lorenzen is competing for a starting rotation spot. He will obviously make the team, and if he isn’t a starter, he makes the Reds bullpen much better. Outside of Lorenzen and the four locks above, the rest is a crapshoot. Cody Reed and Amir Garrett are other starters who could end up on the opening day roster in the bullpen. Kevin Shackleford and Austin Brice looked good at times in 2017, and they are options. The Reds also have non-roster invitees with MLB experience competing: lefties Kyle Crocket and Oliver Perez, and Kevin Quackenbush.

The Reds bullpen is not going to overwhelm many teams. However, the Reds have assembled a nice bullpen that should hold steady in 2018. The interesting thing to watch as we get closer to opening day is if the Reds decide to throw any of their pitching prospects into the bullpen. That would make the ceiling of the bullpen higher.